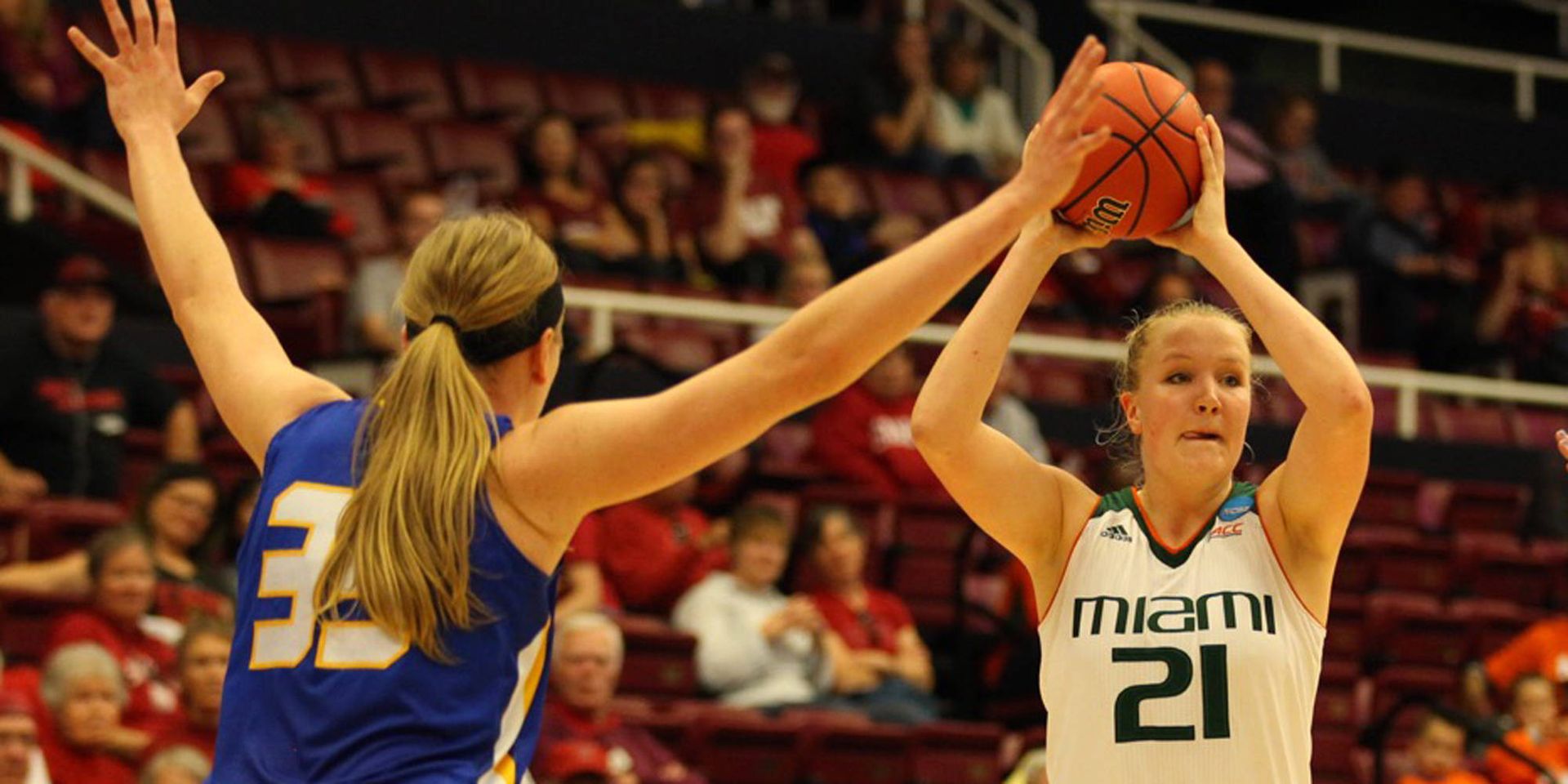 “I cannot be disappointed with our effort. If you take our shooting of four of our starters, it was a rough night for us,” Miami head coach Katie Meier said. “To be honest, for us to overcome that and keep this game as competitive as it was is a real compliment to my bench, which I thought was amazing, and to just our hustle and our effort.”

The Hurricanes, who had the longest travel distance of any team in the 64-team field, took a 22-18 lead through 10 minutes of action. They connected on their final six shots of the opening period, including a buzzer-beating pull-up jump shot by Cornelius.

Miami scored nine-straight points late in the second period to take its largest lead of the half at 39-34. South Dakota State (27-6, 13-3 SL) answered with a 3-pointer at the buzzer by freshman guard Madison Guebert to trim its deficit to two entering the locker room.

Guebert led all scorers with 14 points at the intermission, while Motley paced the Hurricanes with nine points—all in the first period—through the opening 20 minutes.

After their buzzer beater to close the second period, the Jackrabbits extended their run to 14-1 to open the third period, taking a 48-40 lead with four minutes and 51 seconds left in the stanza. Miami pulled to within three before South Dakota State scored five of the final six points of the frame to take a 55-48 edge into the final quarter.

Miami trimmed its deficit to three twice in the final 10 seconds, but could not close the gap any further.

“I’m not sitting here regretting a ton or feeling, ‘Goodness gracious, we didn’t perform well,’” Meier said. “We didn’t hit our shots that we need to hit to win, but dang, if you watched that game, you have to love my team and you have to love their team, period.”

Motley’s 19 points tied for the game lead, while Cornelius finished with 18 and connected on four 3-pointers to tie the program record in an NCAA Tournament game. Hof posted 17 points, a co-game-high nine rebounds and a program NCAA Tournament record-tying four blocked shots in the defeat. The point totals for Netherlands natives Cornelius and Hof were both their second-highest of the season.

“I’m going to miss her like I can’t even tell you,” Meier said of Woods. “She just heart and soul, and the most unselfish kid . . . We’re only losing one [senior], but she counts for about five.”

The Jackrabbits had 22 turnovers, leading to 24 Miami points, while the Hurricanes committed 10 giveaways that went towards four South Dakota State points. The Jackrabbits shot 8-of-18 (44.4 percent) from 3-point range and Miami led 41-9 in bench scoring.

·         This was the first-ever meeting between Miami and South Dakota State. The Hurricanes went 4-1 this season when playing a team for the first time.

·         This was just Miami’s third defeat of the season against an unranked team and its second against a team not currently in the top 20 of both national polls.

·         The Hurricanes set a program NCAA Tournament record with 14 steals, surpassing its prior top mark of 12, which had been achieved four times (most recently vs. Idaho State, 3/17/12).

·         Woods is the first player in program history to play in four NCAA Tournaments.

·         Woods, who eclipsed 2,750 minutes played as a Hurricane, had at least five rebounds and at least five assists for the fourth time this season and the first since 1/7/16 vs. Pittsburgh.