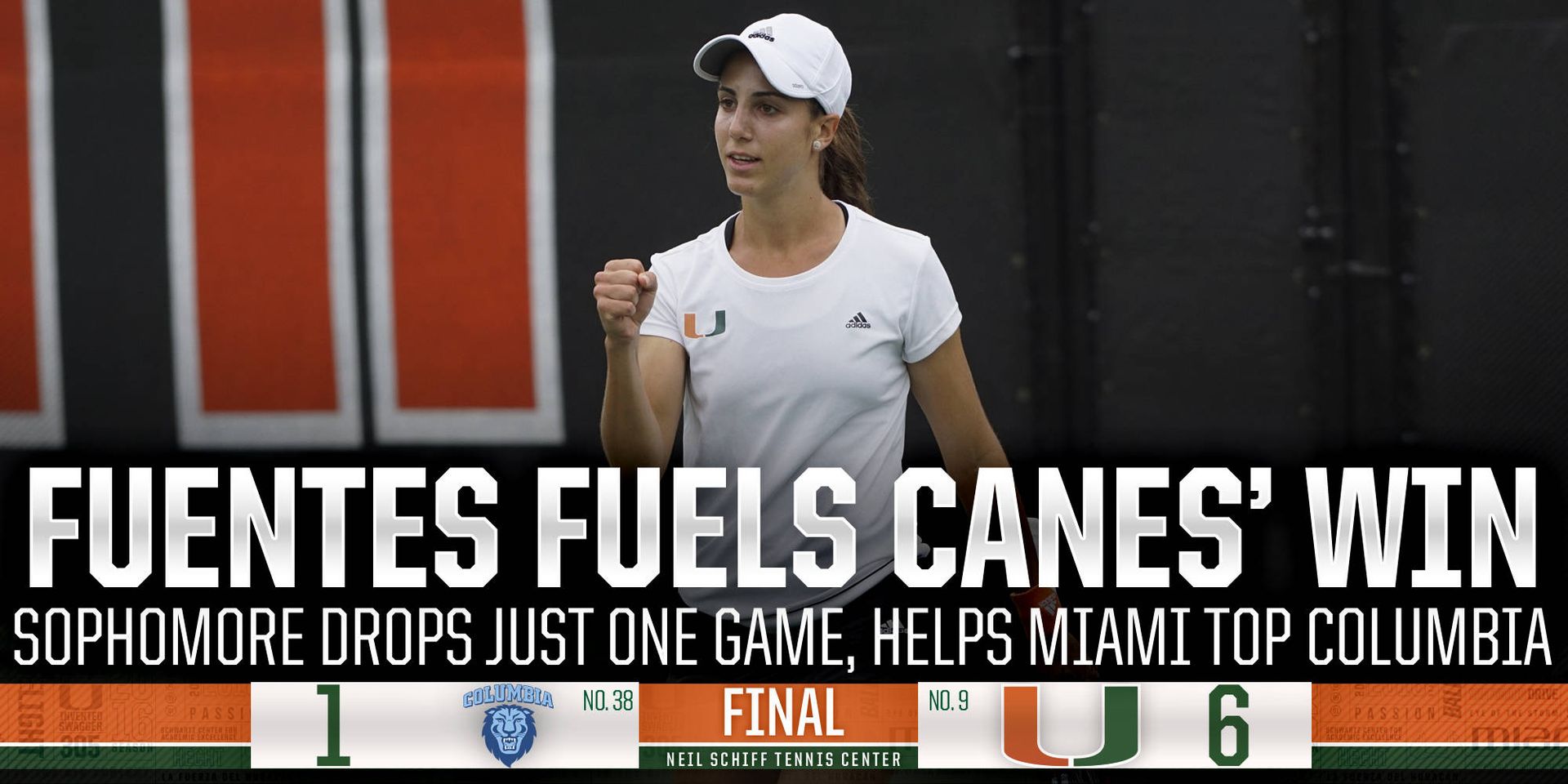 Ninth-ranked Miami (7-4, 3-2 ACC) conceded fewer than two games in nine of the 12 sets it won between singles and doubles in its first-ever meeting with the Lions.

“I think we just played well today,” Miami head coach Paige Yaroshuk-Tews said. “The girls have been practicing well. I think they’re fresh. I was happy with what they did. They kept it pretty clean.”

A tremendous showing by sophomore Silvia Fuentes and senior Clementina Riobueno earned the pair a 6-0 win over Andrea Kevakian and Star Makarome to begin doubles play. The No. 10-ranked duo of senior Stephanie Wagner and sophomore Wendy Zhang then earned the point for the Hurricanes with a 6-3 victory against No. 59 Rima Asatrian and Alexandra Solovyev.

Sophomore Sinead Lohan and freshman Clara Taneilian, who check in at No. 55 nationally and were playing together as a ranked pair for the first time, had their match against Adi Milstein and Kanika Vaidya left unfinished, tied at four.

The Hurricanes got off to a blazing hot start in singles play and it was Fuentes who got on the board first, posting a 6-0, 6-1 win versus Solovyev. Fuentes dropped just one game in her three sets between singles and doubles, turning in an outstanding performance Monday.

“Silvia was on her game today. I wasn’t back in the back courts, but from what I heard, she played very simply and very cleanly, treating every point as though it was an important point regardless of the score,” Yaroshuk-Tews said. “That’s what she needs to do moving forward. Definitely a clean day and good preparation for what we’ve got coming up next.”

Following a weather delay of approximately 10 minutes, Miami came back on the courts and quickly clinched the match. No. 103 Zhang completed her dominant 6-0, 6-1 victory over Makarome and then immediately after, seventh-ranked Lohan gave Miami its match-winning fourth point. The Waterford, Ireland, native won 6-0, 6-3 against Asatrian.

The wins continued to come in quick succession for Miami, even with the result already in hand. Freshman Ana Madcur finished off a 6-2, 6-1 win over Sarah Hu and then Taneilian defeated Kevakian, 6-1, 6-1, to make it 6-0 Hurricanes.

“I think I was the happiest today with what I’ve been seeing at five and six, the composure [of Ana and Clara],” Yaroshuk-Tews said. “Those two girls down there, they’re freshmen. They look like upperclassmen. They’re competing their tails off. They’re really listening and observing. I was just telling them how important that is moving forward in the season, that we’ve got that type of tennis being played so low in our lineup.”

Miami will be back in action Wednesday with its second of three home matches this week when it hosts second-ranked Ohio State at 11 a.m.