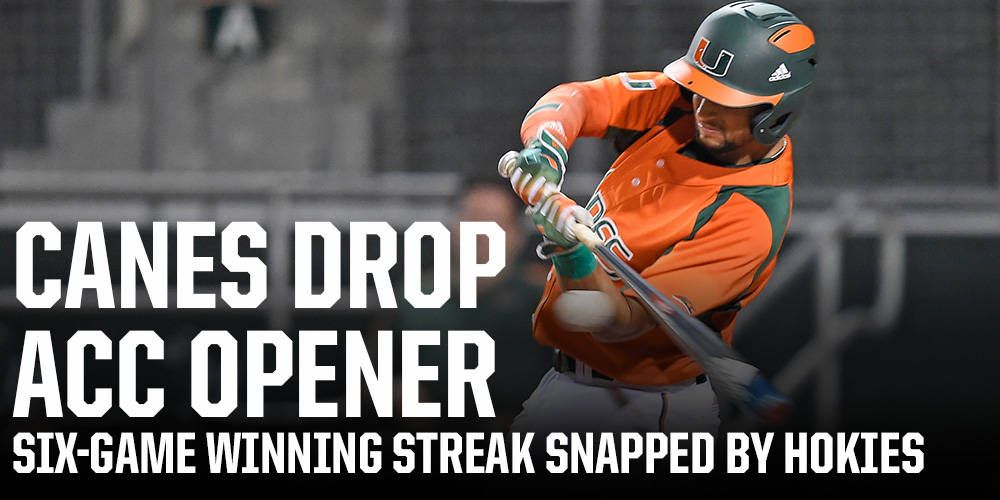 BLACKSBURG, Va. – Sixth-ranked Miami fell behind early and could not recover Friday, falling to host Virginia Tech 14-3 at English Field in the conference opener for both teams.

The Hokies (10-5, 1-0 ACC) struck for five runs in the first inning, highlighted by a grand slam off the bat of Nick Anderson, to jump out to a commanding advantage.

The Hurricanes scraped together two runs in the second to trim the deficit to 5-2 on an RBI double from Brandon Lopez and an RBI groundout from Edgar Michelangeli.

The visitors threatened to cut deeper into the Hokies’ lead in the third when they loaded the bases with one out, but Virginia Tech lefthander Packy Naughton retired Willie Abreu and Michelangeli to escape any damage.

Junior Zack Collins cracked his fourth home run of the season off Naughton (2-1) to open the fifth. The opposite-field, solo shot was the 30th of his career.

Thomas Woodrey (2-2) suffered the loss, tossing only 2.2 innings before giving way to the bullpen.

Junior Ryan Guerra made his career debut in relief and tossed 3.2 innings.

The Hurricanes return to English Field Saturday for game two of the series with Virginia Tech. First pitch for the contest, slated for broadcast on WVUM 90.5 FM and WVUM.org, is set for 1 p.m.