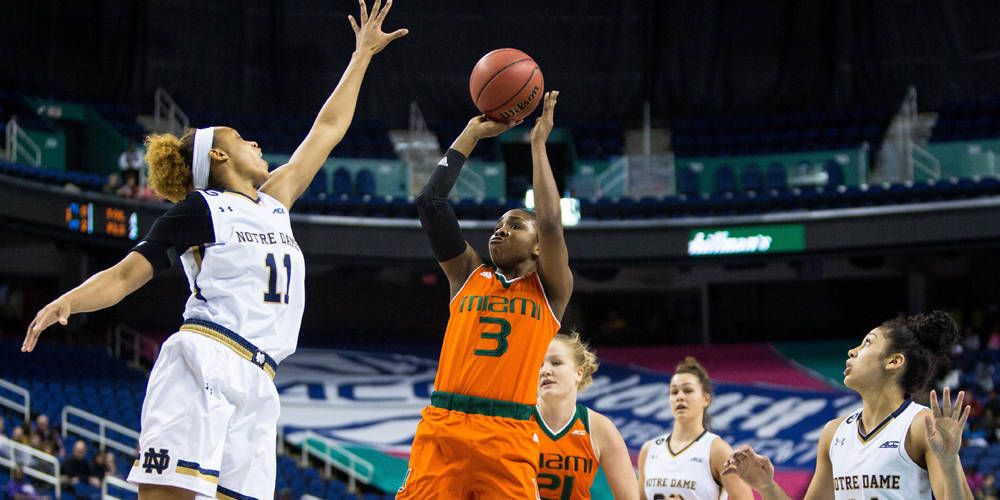 @CanesWBB Falls in ACC Semis to No. 2/3 Irish

GREENSBORO, N.C. – A valiant effort against one of the nation’s finest programs came up short for the University of Miami women’s basketball team Saturday afternoon in the semifinals of the ACC Tournament. The No. 21/21 Hurricanes fell 78-67 to No. 2/3 Notre Dame at the Greensboro Coliseum.

Fifth-seeded Miami (24-8, 10-6 ACC) led four minutes into the third period, but the top-seeded Fighting Irish charged back down the stretch for the win. Junior guard Jessica Thomas led the Hurricanes with a co-game-high 17 points and she tied her career high, set just a day earlier, with five 3-pointers made.

“I think we answered all the doubts,” Miami head coach Katie Meier said of her team’s showing in the ACC Tournament. “Do we have electric, exciting players, too? Yeah. And can we be a giant killer, which we’ve always had that reputation.”

In the first two minutes and 45 seconds, the Hurricanes made four of five 3-pointers, including two by junior guard Adrienne Motley, helping them build an early 12-8 lead.

The Hurricanes’ hot shooting from 3-point range continued in the second period and Miami outscored the Fighting Irish by three, 19-16, in the session. Overall, the Hurricanes went 8-of-16 (50.0 percent) from long range before the break, with the eight makes matching their second-most in a half this season. Thomas alone went 4-of-5 from deep in the first 20 minutes.

Down by four early in the second half, Miami went on a 7-0 run, capped by seven-straight points by sophomore forward/center Erykah Davenport, to grab a 47-44 edge with 6:23 on the third period clock.

A strong close to the period by the Fighting Irish helped them tie their then-largest lead of the game, eight points, entering the final stanza, 59-51.

Notre Dame pulled away in the fourth period en route to the victory, clinching their third berth in the ACC Tournament championship in as many years in the conference.

“I’m awful proud,” Meier said. “I really, really am very deeply moved by the effort my team gave today, in adversity and with role players having to play big minutes in a game like that. Foul trouble just completely handcuffed us in the first half, and I thought we did a fantastic job of overcoming it and staying focused.”

Both teams had 30 points in the paint, 14 bench points and 13 assists in the game.

Miami will now await its postseason destination. The Hurricanes are seeking their seventh-straight postseason appearance and fifth NCAA Tournament trip in the last six years.

·         Miami was the only team not seeded in the top four to make the semifinals of the ACC Tournament.

·         This was the second ACC Tournament semifinal appearance in program history.

·         The Hurricanes’ eight 3-pointers in the first half matched their second-most in a half this season.

·         Thomas scored in double figures for the 22nd time this season. She has scored fewer than nine points on just six occasions.

·         Woods scored in double figures for the ninth time this season. It is second time in the ACC Tournament she has reached 10-plus points.

·         Hayes, who reached 800 points as a collegian, has connected on a 3-pointer in back-to-back games for the first time this season.

·         Keyanna Harris recorded multiple blocked shots for the first time in her career.