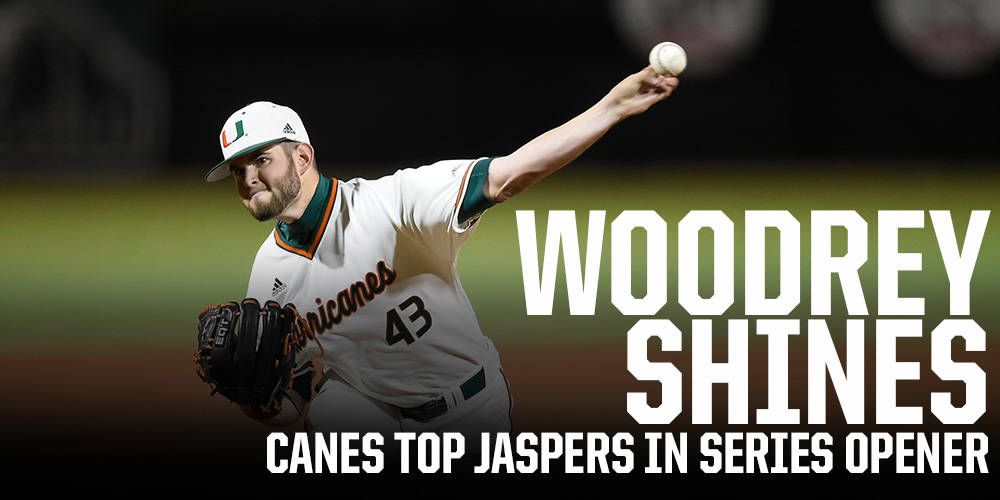 CORAL GABLES, Fla. – Sixth-ranked Miami scored early and often to back up eight shutout innings from senior Thomas Woodrey, as the host Hurricanes cruised to a 10-0 win over Manhattan in the series opener.

The Hurricanes (7-2) hit Jaspers lefthander Tom Cosgrove hard from the start, tagging him for one run in the first inning, four in the second and another in the third.

In the opposite dugout, Woodrey was in control from the outset. He retired the first 10 batters he faced until a one-out single by Brendan Bisset in the fourth, and allowed just three baserunners on the night.

A week after struggling against the top-ranked Florida Gators, Woodrey (2-1) rebounded in a big way Friday night.

“The best part about baseball is that it’s a long season,” Woodrey said. “I didn’t have my best outing last week. I was anxious to get out there today, and thankfully I was able to have a good performance.”

The senior southpaw set a career high with 10 strikeouts, the first time a Miami pitcher had double-digit whiffs in a game since Andy Suarez did so in April 2015. He allowed two singles and walked one batter in a 95-pitch gem.

“That’s not really the style of pitcher I am,” Woodrey said of his career-high punchout total .”If I’m getting the strikeouts, I’ll take them when I can get them, but the big part was getting ahead of the batters, controlling the count, and I think that’s why I had success tonight.”

The Hurricanes opened the game’s scoring in the first with an RBI single from red-hot Johnny Ruiz to make it 1-0.

Miami scored four runs in the second despite only recording two hits – an infield single from Brandon Lopez and an RBI double from Romy Gonzalez.

Lopez tied a career high with three hits on the night (3-for-5) and scored two runs.

The multi-hit effort was the second straight such performance for Lopez, who batted .303 in last season’s run to the College World Series.

Redshirt junior Edgar Michelangeli made it 6-0 when he cracked an RBI single up the middle to score junior Willie Abreu in the third.

Miami outhit Manhattan 18-3 on the night, with multi-hit performances coming from four players: Ruiz, Lopez, Abreu (2-for-4) and Joe Gomez (2-for-2).

The offense outburst was more than enough for Woodrey (2-1), who worked quickly through the fifth and sixth innings with a comfortable advantage.

Manhattan (1-3) built a threat in the seventh when the first two baserunners of the inning reached via walk and single, but Woodrey struck out pinch hitter Ryan Gronlier to escape any damage.

“It was good to see Woodrey pitch well and get back in the groove,” head coach Jim Morris said. “He was our player of the game tonight. A lot of guys had hits – Lopez had three, Edgar had three…it was fun to watch, and a good game to be in our dugout.”

The Hurricanes offense scored four insurance runs over their final three trips to the plate. Gomez recorded his first two hits as a Hurricane, while junior Barry Buchowski added a late sacrifice fly.

Epstein, who saw time in the team’s exhibition with the Miami Marlins earlier this week, pitched a scoreless ninth inning in his official Hurricanes debut.

“It was a big win for us tonight,” Morris said. “I wouldn’t say we played a complete game – but we really pitched well, we really swung the bat well, we played good defense.”

The Hurricanes return to Alex Rodriguez Park at Mark Light Field Saturday for game two of the series. First pitch for the contest, set for broadcast on ESPN3 and WatchESPN, is set for 7 p.m.