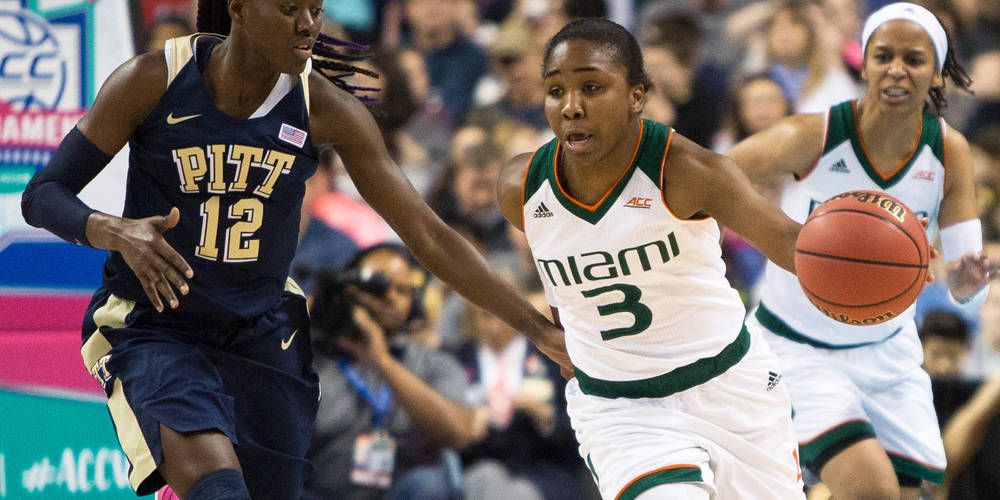 GREENSBORO, N.C. – The University of Miami women’s basketball team turned in one of its best performances of the season Thursday in the second round of the ACC Tournament, rolling past Pittsburgh, 77-55.

Junior guard Adrienne Motley led all scorers with 19 points on 8-of-14 shooting (57.1 percent). Redshirt junior forward Keyona Hayes posted 18 points, a team-high seven rebounds and shot a perfect 9-of-9 from the field, the best mark by a Hurricane this season.

“She makes it so easy to coach a game. She’s a great matchup for us,” Miami head coach Katie Meier said of Hayes. “It helps me offensively to have that player who can hit a jumper and then go inside and finish with contact. It made it a lot easier for me today.”

Six different Hurricanes scored in the first period to help Miami build an 18-12 lead over Pittsburgh (13-18, 4-12 ACC) through 10 minutes of action.

Miami, which had a first round bye Wednesday, went on an 18-2 run during the second quarter to push its advantage to 19 points, 38-19, with 30.4 seconds left before the break. The Hurricanes conceded just two points in the final five minutes of the half and led 38-21 entering the locker room.

Motley had a game-high nine points at halftime to pace Miami, which shot 17-of-27 (63.0 percent) from the field during the opening 20 minutes, marking its best first half shooting percentage of the season. On the other end, the Hurricanes limited the Panthers to a 9-of-29 (31.0 percent) clip.

Miami stretched its lead to as many as 22 points in the third period, using a 12-2 run to take a 55-33 edge with three minutes and 31 seconds left before the fourth quarter. Both Motley and junior guard Jessica Thomas connected on 3-pointers during the Miami run. The Hurricanes would go on to take a 57-40 advantage into the final session.

The Panthers pulled within 11 in the fourth period, but Laura Cornelius knocked down a 3-pointer to stretch the lead back up to 14 and Miami never looked back. The freshman guard’s shot started a 15-4 run to close the game for the Hurricanes, who held Pittsburgh without a point for the last three minutes.

In addition to Motley and Hayes, both freshman forward/center Emese Hof and redshirt senior guard Michelle Woods finished with double figures in the scoring column. Each recorded 11 points, with Hof also pulling down five rebounds, tied for the second-most on the team.

“We got a lot of clean looks because of our ball movement, but it’s the balance,” Meier said of her team’s stellar offensive performance. “Everybody was so reliable. It allowed us as a coaching staff to go inside-out and ride a hot player. When we called their numbers, they really came through.”

The Hurricanes had a 40-18 edge in points in the paint and led 33-23 in rebounding. Miami also outrebounded Pittsburgh, 33-23, had a 21-10 advantage in assists and did not have a single shot blocked.

Miami will now take on No. 14/10 Florida State, the fourth seed in the field, Friday at 11 a.m. in the ACC Tournament quarterfinals.

·         The all-time series between the Miami and Pittsburgh is now 19-9 in favor of the Hurricanes, who have won seven of the past eight meetings.

·         This was the first time the Hurricanes and Panthers met in ACC Tournament play. Pittsburgh had a 2-1 lead on Miami in BIG EAST Tournament action.

·         Miami shot more than twice as well as the Panthers from the field in the first half, posting a 63.0 percent clip and holding Pittsburgh to a 31.0 percent mark.

·         Miami trailed Pittsburgh for just one minute and 23 seconds of action.

·         Woods, who surpassed 750 points as a collegian, scored in double figures for the eighth time this season and the first time since Miami’s regular season meeting against Pittsburgh (1/7/16).

·         Hayes posted double-digit points for the 12th time this season. Eight of those outings have come against ACC teams.

·         Hof scored in double figures for the 10th time in her freshman campaign, including the fourth time against an ACC opponent and the third time in the last five games.