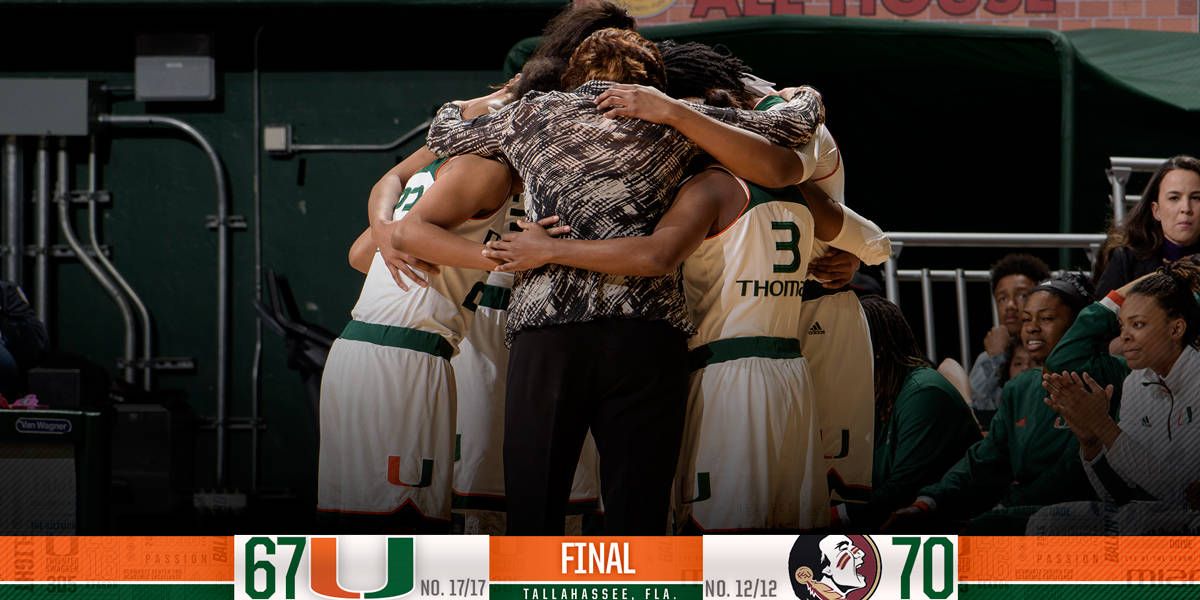 TALLAHASSEE, Fla. – The University of Miami women’s basketball team led No. 12/12 Florida State for over 31 minutes on the road Sunday at the Donald L. Tucker Civic Center, but fell by three, 70-67.

“Well, that’s the team that we need to be and that’s the team we truly are. So, it was nice to have the intensity back and the tempo back, [as well as] the defensive effort and the rebounding effort,” Miami head coach Katie Meier said. “We had to fix a lot and I’m really excited because it wasn’t going to be fun going into the postseason with so many unknowns. So, I think everybody responded tonight and we played a much cleaner basketball game, but in the end, [Florida State junior guard] Leticia Romero just made great plays.”

Miami jumped out to a 9-2 lead in the first three minutes and 34 seconds. The Hurricanes connected on a trio of 3-pointers in the first period, two by junior guard Jessica Thomas and one by Motley, and led 16-15 through 10 minutes of play.

The Hurricanes opened the second quarter on a 10-4 run to stretch their lead back up to seven, 26-19, with five minutes and 37 seconds left before the intermission. Florida State would go on to make its final three shots of the half and Miami took a 30-29 lead into the locker room, just the sixth team to lead the Seminoles at the break. The Hurricanes did not trail at all in the opening 20 minutes.

Motley led all players in both points and rebounds at the half, with 10 and seven, respectively. The seven rebounds tied her top mark for a full game in 2015-16.

Florida State took its first lead of the game just under three minutes into the third period and built its advantage to four points, 37-33, with 6:08 on the clock. Miami, however, immediately countered by going on a 13-3 run to go up by six, 46-40,

Five different Hurricanes scored during their run to regain the lead, and Miami went on take a four-point edge, 48-44, through 30 minutes of action.

Miami raised its lead back to six, 54-48, in the fourth period, but Florida State answered with seven-straight points to go up by one with four minutes and 24 seconds left. Miami quickly tied it with a free throw by freshman guard Laura Cornelius 19 seconds later.

“We gave them live ball turnovers. They were going to make a run,” Meier said. “We had command of the game. We had control of the game for almost 32 minutes. They did hit a couple of tough shots, but I think it was the transition points off of our mistakes that cost us that game. That’s what frustrating for us.”

Miami pulled within three, 67-64, on a three-point play by redshirt senior guard Michelle Woods with 9.3 seconds remaining. A 3-pointer by Motley with two seconds to go made it 69-67, but Romero made the first of two free throws to ice the game. Romero shot 5-of-6 at the line in final 20 seconds.

“I thought our post players did a great job of neutralizing their posts because they’re very, very good and we really took them out of their game,” Meier said. “Romero had to have a career high to beat us and I thought she was very timely. Her points were very, very timely. Most every play they made down the stretch she had something to do with. She was great.”

Miami will receive a bye in the first round of the upcoming ACC Tournament as the fifth seed in the field. The Hurricanes will then open play Thursday at 11 a.m. against the winner of Wednesday’s matchup between No. 12-seed Pittsburgh and No. 13-seed North Carolina. The game will be televised live on RSN from the Greensboro Coliseum in Greensboro, N.C.

·         The Hurricanes are just the fifth team to outrebound the Seminoles this year, including when they did so in the team’s first meeting of the season, too.

·         Miami is just the sixth team to lead Florida State at halftime this season.

·         Two Hurricanes, Davenport and Thomas, fouled out of the game. Miami entered the contest with two foul outs all season. It was Davenport’s second time fouling out in 2015-16 and Thomas’ first.

·         Thomas scored in double figures for the 20th time in 29 games this season. She has recorded at least nine points in all but five contests.

·         Hayes, who recorded the 50th start of her collegiate career, tallied double-digit points for the 11th time this season. Seven of those outings have come in ACC play.