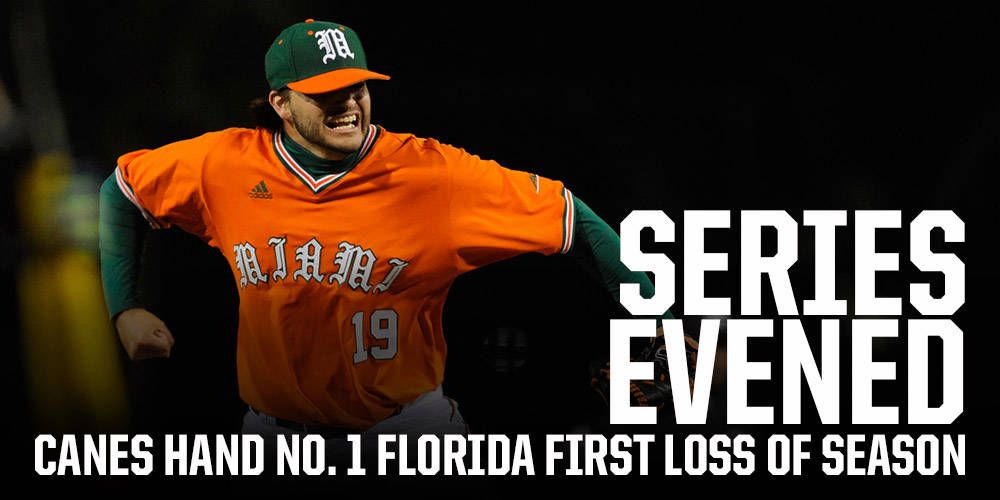 In front of a sold-out crowd of 4,999, Collins and the Miami offense rebounded after being shutout in game one. Collins connected on two-RBI basehits in back-to-back innings to give the Hurricanes an early lead they would not relinquish.

A night after totaling just four hits at the plate, Miami outhit Florida 9-7 in game two.

The hosts were boosted by a gritty start from sophomore lefthander Michael Mediavilla and another strong outing from the team’s bullpen, who tossed the game’s final four innings.

Mediavilla departed after five effective frames and a career-high 98 pitches.

Miami chased Puk (0-1) after just 59 pitches over 2.2 innings. The Hurricanes opened the scoring in the bottom of the second on an RBI double from Johnny Ruiz, and added a pair in the third on a two-RBI single from Collins to take a 3-1 lead.

With the bases loaded in the bottom half of the fourth, Collins roped a single through the right side off Florida reliever Brady Singer that scored Christopher Barr and Carl Chester.

Facing one of the top lineups in the nation, Mediavilla delivered an impressive performance in his second career start for the Hurricanes. The southpaw struck out four batters and surrendered just two hits over 5.0 innings, improving his personal record to 2-0 with the decision.

Though he walked four batters, Mediavilla pitched his way out of a bases-loaded jam in the second and also stranded runners in the third, fourth and fifth innings.

When he retired the dangerous Peter Alonso on his 98th and final pitch, Mediavilla celebrated with a fist pump as he walked off the mound.

Freshman Frankie Bartow entered in relief in the sixth and quickly worked his way through his first two innings of work. But Florida built a threat in the eighth on back-to-back doubles, and after an RBI groundout cut Miami’s lead to 5-2, Morris called upon junior Cooper Hammond in relief.

Hammond delivered, striking out Mike Rivera and inducing a popout from Deacon Liput to strand a runner at third. Junior Bryan Garcia entered in the ninth and, after allowing a bloop single to Buddy Reed that scored a run, struck out slugger JJ Schwarz to end the game.

Miami will go for the series victory against No. 1 Florida on Sunday. First pitch for the finale, set for broadcast on ESPN3 and WatchESPN, is set for 1 p.m.