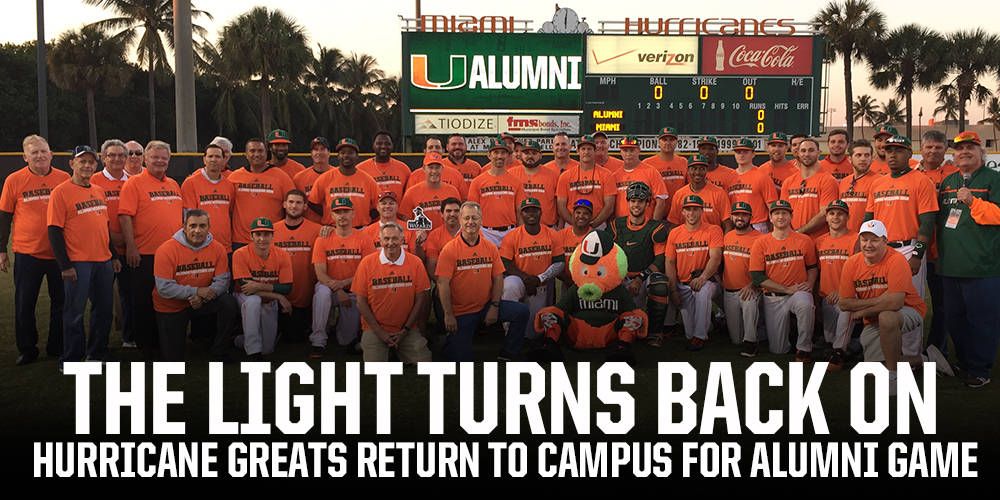 Miami Hosts Alumni in Annual Matchup at The Light

CORAL GABLES, Fla. – The 2016 Miami Hurricanes took the field for their annual matchup with Hurricanes Alumni Saturday night, emerging with a 17-4 victory at Alex Rodriguez Park at Mark Light Field.

Roughly 2,000 fans made their way through the gates for Fan Fest and the Alumni Game, which featured a number of Hurricanes greats taking part in Baseball Alumni Weekend.

Other players taking part in the game included “Downtown” Kevin Brown, former MLB outfielder Brian Barton, former All-ACC outfielder Nathan Melendres, fan favorite Jose Trujillo, and sidewinder Sam Abrams, who was pivotal in Miami’s run to the College World Series in 2015 with his work out of the bullpen.

The 2016 Hurricanes scored runs in each of the first four innings to jump out to an early commanding lead, including a four-run second inning and a six-run third.

Preseason All-America Zack Collins opened the scoring with a sacrifice fly off Prendes in the first inning. An RBI single from Johnny Ruiz made it 2-0 with one out in the second, while Carl Chester followed with a two-run single to center to pad Miami’s lead.

Two errors by the Alumni keyed Miami’s six-run third inning. Collins had his second sacrifice fly of the night in the frame.