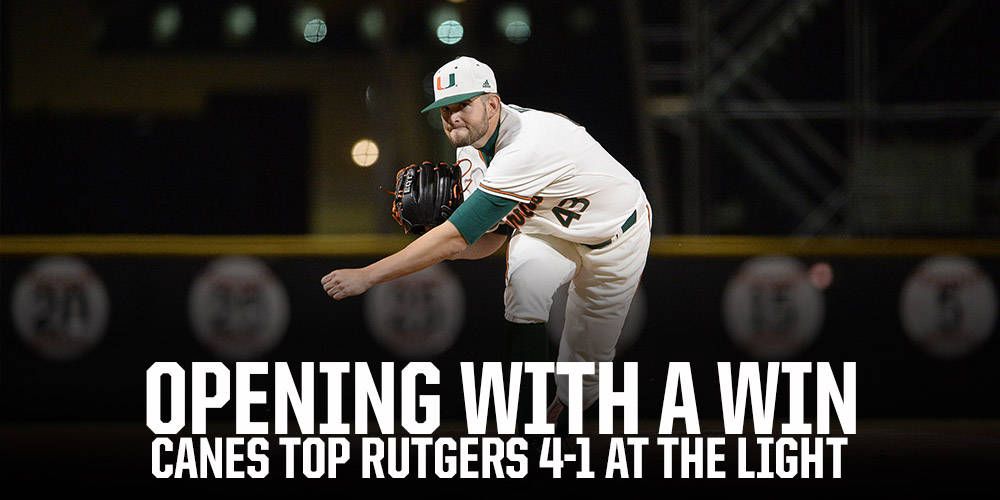 Miami Tops Rutgers 4-1 on Opening Day at The Light

The Hurricanes (1-0), coming off the 24th College World Series berth in program history in 2015, have not lost on Opening Day since 2007.

“That is a testament to the coaching that we have and the guys who lead this team,” said outfielder Willie Abreu, who went 2-for-3 with a solo home run and two RBI. “The only guys who have been here for nine years are the coaches. You can tell they’re doing their job and doing the right thing to get us ready right out of the gate.”

Senior Thomas Woodrey delivered a solid outing in the first Opening Day start of his Miami career. Woodrey, an All-ACC Second Team selection a season ago, scattered four hits and allowed just one run in five innings to improve his career record to 16-2.

Three relievers combined to pitch the final four innings, including Preseason All-America closer Bryan Garcia, to finish off the victory.

“Both teams played good defense, and for us, I thought it was a solid team game,” Morris said. “A lot of guys got big hits, Woodrey pitched well, our bullpen came in and did their job…that’s the way we play the game.”

Other than a solo home run from Rutgers’ second baseman John Jennings, Woodrey (1-0) kept the Scarlet Knights largely off the basepaths. After allowing a double to Jennings in the fifth, Woodrey found himself in a jam when R.J. Devish walked to put runners on the corners with two outs and Miami’s lead at just 2-1.

But the southpaw escaped any damage by striking out Jawuan Harris, and celebrated with a fist pump as he walked off the mound after 91 pitches.

“Woody pitched like Woody pitches,” Morris said. “We were thinking about 85 [pitches] was what we’d do with him. He threw quite a few changeups, mixed up with that fastball.”

The Hurricanes widened their lead over the Scarlet Knights (0-1) with a sacrifice fly from redshirt junior Christopher Barr in the fifth that plated freshman Romy Gonzalez to make it 3-1.

Gonzalez, along with fellow freshman Frankie Bartow, made his Hurricane debut in front of 3,299. Gonzalez hit a double that nearly cleared the fences for his first career hit in the fifth, while Bartow tossed two scoreless innings in relief of Woodrey.

“I thought I had [a home run] for a second, but it’s hard to beat the wind. I’m not as big as Willie,” Gonzalez joked. “But it was a great feeling to finally get on base to help my team, and get my first career hit out of the way.

Abreu, who put Miami ahead 1-0 with an RBI single in the bottom of the first and added an opposite field homer in the fourth to give Miami a 2-1 lead, admitted to being nervous before the game.

“I was talking to Romy last week – if you don’t have nerves, I don’t think you’re normal,” Abreu said. “I also talked to [Coach Morris] about it before the game. He said, ‘if you don’t get nerves, you’re not a human being.'”

Gonzalez felt the nerves in the first inning, when he one-hopped a throw across the diamond to Barr.

“II got a little shook up there – my first baseman picked it for me, that was huge,” Gonzalez said. “Ultimately, I feel good. We got a good win and we’re just ready for tomorrow.”

Junior sidewinder Cooper Hammond needed just 14 pitches to get through a scoreless eighth, while closer Garcia punctuated his first save of the season with a swinging strikeout of Gaby Rosa.

The Hurricanes, who extended their winning streak over the Scarlet Knights to 12 straight games, will go for a series victory Saturday night at 7 p.m.

“This is what we wanted to do, and it’s what we want to keep doing,” Abreu said. “But we have to keep looking at what’s in front of us, and that’s Rutgers again tomorrow. That’s what we’re looking forward to now.”