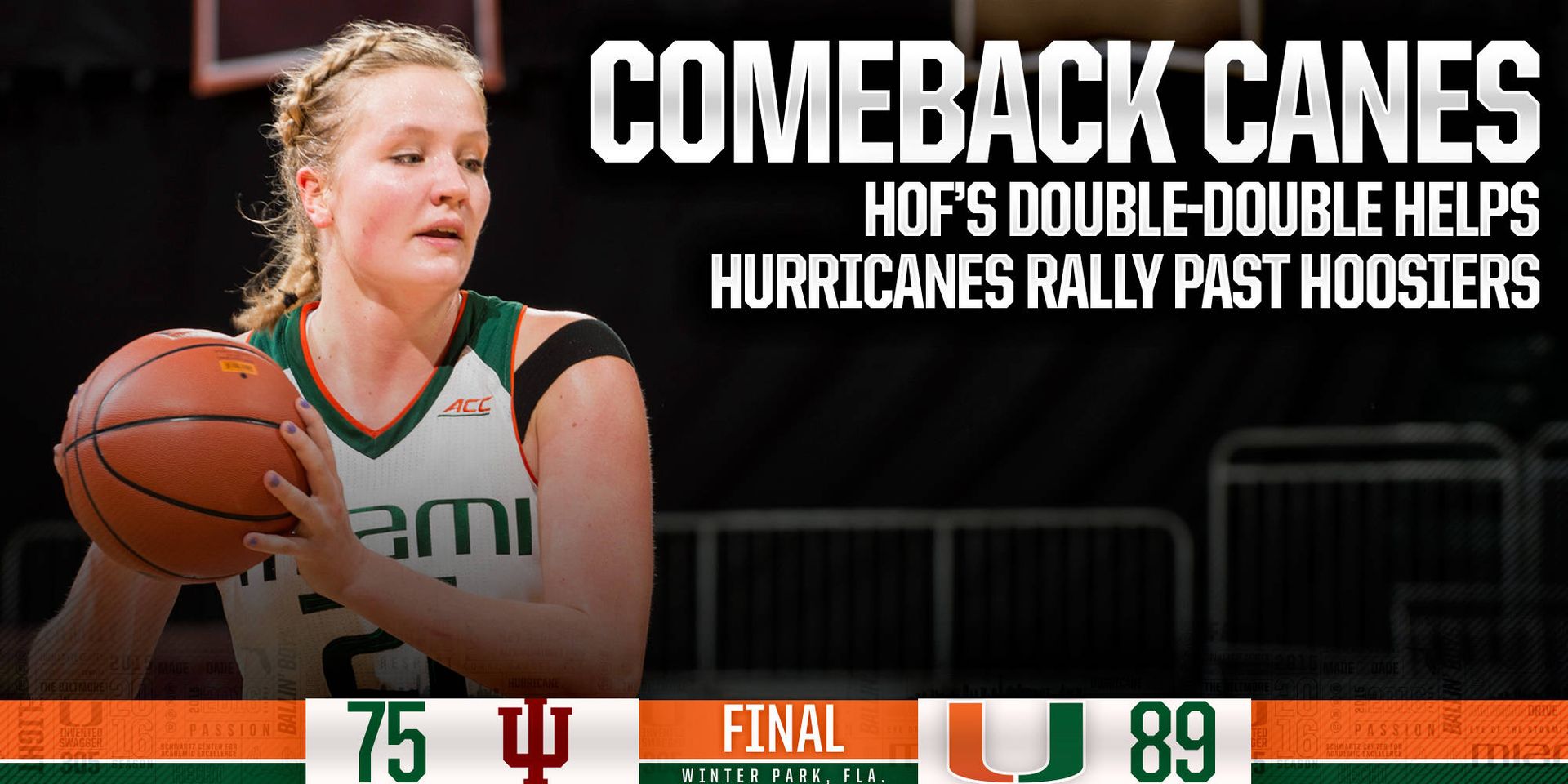 No. 23/21 Miami (11-1) erased an 11-point deficit to earn the victory behind a dominant performance by freshman forward/center Emese Hof in the first start of her career. The freshman logged a double-double with a career-high 26 points and a game-high 14 rebounds, while shooting 10-of-13 (76.9 percent) from the field and 6-of-7 (85.7 percent) at the free throw line.

“We liked her skill set against the multiple defenses that Indiana played. She allowed us to flow,” Miami head coach Katie Meier said. “She’s an amazing team player, but we really needed her to score a lot tonight and she did. Tonight was absolutely her night. It was part of the game plan. She was so successful I just didn’t even want to take her off the court. She did a great job.”

Hof had six points and five rebounds in the first four minutes of the game, immediately setting the tone for her performance. After a back-and-forth opening six minutes, Indiana (7-3) went on a 10-0 run to take a 22-14 edge with 2:29 left in the period, but Miami trimmed the deficit to six, 24-18, through 10 minutes of action.

Indiana opened the second period by extending its edge to 11, 29-18, but Miami had an immediate answer. Junior guard Jessica Thomas hit back-to-back 3-pointers to open a 14-0 run in a span of two minutes and 58 seconds—including 10 points in 1:24—to help the Hurricanes charge into the lead.

The Hurricanes hit 6-of-7 field goals during the run and held Indiana scoreless for three minutes and 17 seconds. Indiana then scored six unanswered points en route to a 40-39 advantage at halftime. Hoosier junior guard Alexis Gassion scored to beat the buzzer after a 3-pointer by freshman guard Laura Cornelius had put the Hurricanes back in front with 14 seconds on the clock.

Hof had a team-high 10 points and a game-high seven rebounds in the first half, while Indiana sophomore guard Tyra Buss led all players with 15 points before the intermission. The Hoosiers shot 6-of-11 (54.5 percent) from 3-point range in an opening 20 minutes that included 10 lead changes.

“We had a little bit of a heart-to-heart at halftime. I thought that we were a little bit flat. This team, we pour our hearts into what we do and we didn’t feel that way,” Meier said. “The halftime speech was one defensive adjustment and the rest was all our motivation and our spirit and how much we care about each other, to get that back. I was so happy with the response of Keyanna Harris and Erykah Davenport in the second half. They really gave us a great lift and they did what we needed them to do.”

The Hurricanes opened the third period on a 9-0 run in just one minute and 31 seconds to grab an eight-point advantage, 48-40, with 8:29 on the clock. After Indiana trimmed the lead back down to two, Miami went on a 16-4 run to go ahead 64-50 with 2:53 remaining in the period. The surge was capped by an 8-0 run that included 3-pointers by Cornelius and redshirt senior guard Michelle Woods.

Miami would take a 69-55 lead into the final frame after outscoring the Hoosiers 30-15 in the third period behind nine points from junior guard Adrienne Motley.

The Hurricanes stretched their lead up to as much as 18 in the final period before winning by the final 14-point margin. Miami’s 50 points in the second half were the most it has scored in a half all season and its 89 total was its most in a full game.

Hof was joined by four other Hurricanes with double figures in the scoring column in the win. Motley finished with 18 points on 8-of-14 shooting (57.1 percent), while adding five rebounds and a co-game-high four assists.

Thomas had 14 points and she too had four assists, while Cornelius posted 12 points and redshirt junior forward Keyona Hayes had 10.

“It’s just great balance. Somebody like Jessica Thomas—I thought she played like one of the nation’s premier point guards in this tournament,” Meier said. “It’s nice for her to do it kind of in her backyard, too. I’ve always said Jessica is our motor. She just grinds and grinds and grinds and grinds. She kept the tempo up and freed up Motley for a lot of her looks. I thought Laura Cornelius had the best game of her career as well.”

Indiana’s Buss led all scorers with 28 points, the most Miami has conceded to a player this season. Gassion logged 19 points and sophomore forward Amanda Cahill finished with 15.

The Hurricanes had a 44-31 edge in rebounds in the game, including 15-9 on the offensive glass. Miami also led 44-32 in points in the paint and doubled up the Hoosiers in second chance points, 14-7.

Miami will have Monday off and then play its third game in four days Tuesday at 2 p.m. when it hosts FIU at the BankUnited Center.

·         Hof scored in double figures for the sixth time and surpassed 100 points in her college career.