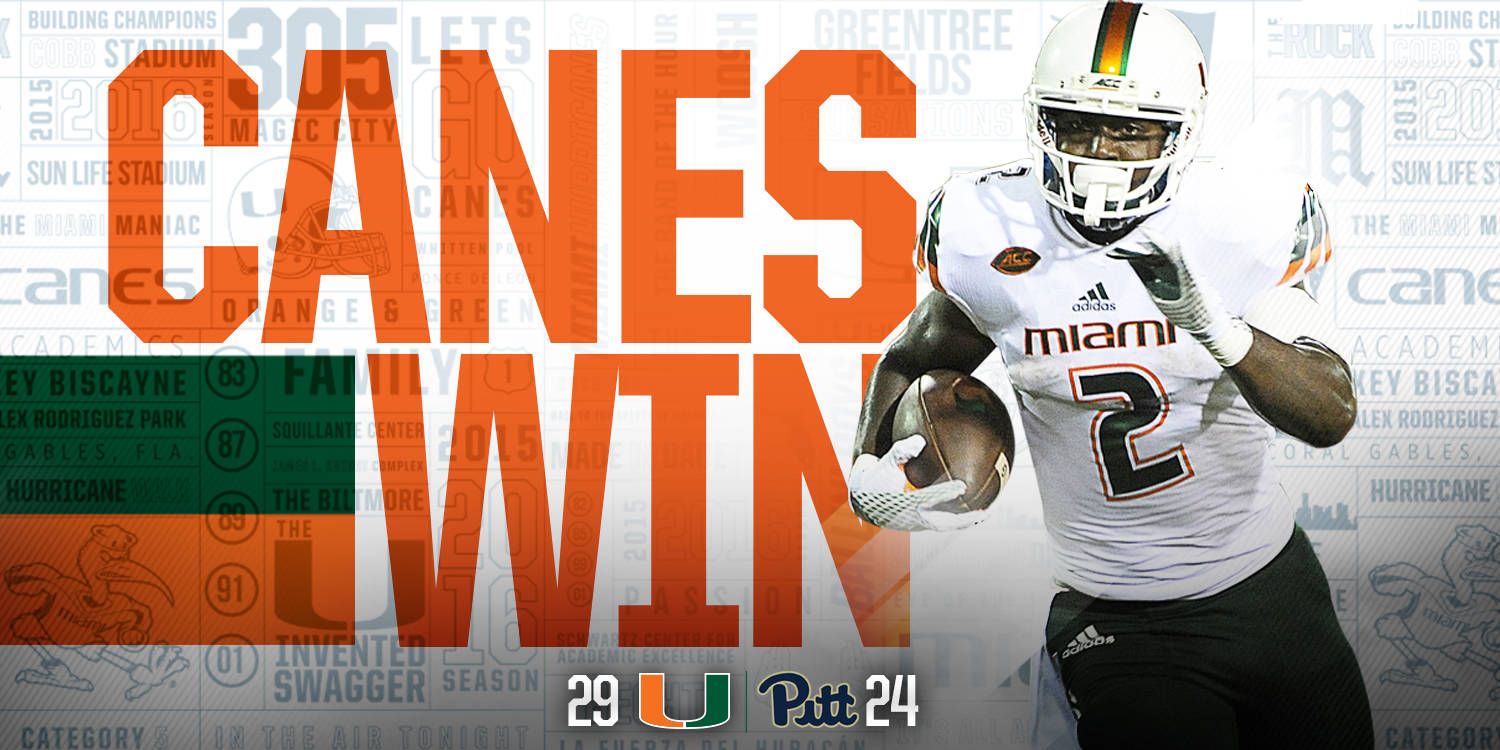 PITTSBURGH (AP) — Brad Kaaya threw for 261 yards and a touchdown and ran for another as Miami continued its surge under interim coach Larry Scott with a 29-24 win over Pittsburgh on Friday.

Kaaya moved past Heisman Trophy winner Vinny Testaverde and into fifth on the school’s all-time passing list after completing 21 of 35 passes. Joseph Yearby ran for 99 yards and Michael Badgley tied a school record with five field goals for the Hurricanes (8-4, 5-3 ACC). Miami improved to 4-1 under Scott, who took over in October.

Pitt, searching for its first nine-win regular season since 2009, couldn’t complete a late rally from a 20-point deficit. Nathan Peterman threw for a touchdown and ran for another and freshman Darrin Hall ran for 103 yards and a touchdown for the Panthers (8-4, 6-2). Wide receiver Tyler Boyd finished with 117 total yards in perhaps his final game at Heinz Field.

In the first half alone Miami called a flea flicker, a double reverse and twice went for it on fourth down. Kaaya converted the first into a 1-yard touchdown lunge and the second — on a fourth-and-inches at the Miami 31 — extended what became a 17-play, 72-yard drive that ended with Badgley’s third field goal of the half and a 23-3 Miami lead.

The Panthers have been one of the ACC’s biggest surprises in coach Pat Narduzzi’s first season by relying heavily on an offense that takes care of the ball and a defense that produces steady pressure on the opposing quarterback. Looking for the program’s first nine-win regular season since 2009, the Panthers did neither against Miami.

Fresh off a nearly flawless four-touchdown performance in a victory over Louisville, Peterman was inaccurate at best and sloppy at worst. He tossed his first interception in conference play on Pitt’s second offensive snap and struggled to find any real rhythm.

Kaaya and the Hurricanes had no such issues. Miami scored on five of its six first-half possessions, with Kaaya hitting Rashawn Scott with a pretty 22-yard touchdown that made it 17-0 with 2:34 left in the first quarter. Pitt trailed at some point in six of its eight wins this season, but never by more than a touchdown. Unable to provide Peterman with protection or time to look downfield, the Panthers instead relied heavily on the running game.

It made for effective but slow going. Pitt’s first drive of the second half took more than five minutes but ended when a pair of penalties turned a fourth-and-1 into a fourth-and-11 and a punt. While Hall broke loose for a 35-yard sprint with 3:52 to play in the third to pull Pitt within 23-10, Miami responded by methodically driving for another Badgley field goal.

Pitt rallied late, getting within five on a 5-yard scramble by Peterman with 2:32 to go. The Hurricanes recovered the onside kick and Pitt’s last-gasp lateral was fumbled out of bounds on the final play.