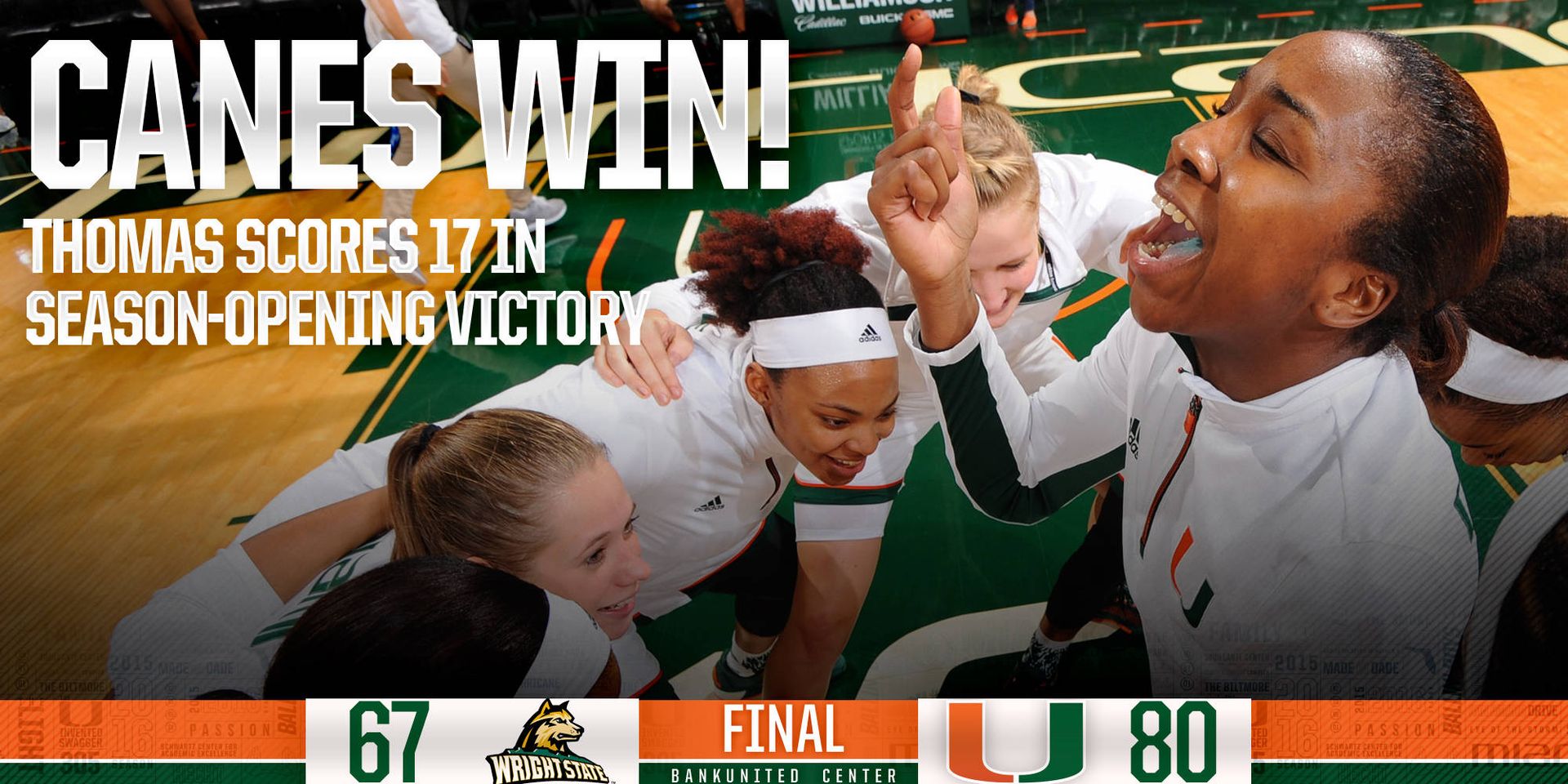 @CanesWBB Storms Back for Season-Opening Win

CORAL GABLES, Fla. – After falling behind Wright State early in its first game of the season Friday, the University of Miami women’s basketball team seized control and picked up an 80-67 victory in front of a record crowd.

The 4,034 fans at the BankUnited Center marked the most-ever at a Miami home game and they witnessed the Hurricanes win their season opener for the 19th-straight season.

Junior guard Jessica Thomas led Miami (1-0) with 17 points and redshirt senior guard Michelle Woods, on her birthday, added 14 points and a career-high seven assists, while shooting 4-of-6 from 3-point range.

”I was obviously very focused and intense before the game, but there were a couple moments where I walked out there and the kids were just going nuts,” Miami head coach Katie Meier said of the elementary school day crowd. “. . . Thirty seconds before the game I just looked around and soaked it all in and thought, ‘This is great.’ When you’re trying to build programs you know you need the community’s support and that was just an awesome show.”

Wright State (0-1) jumped out to a 17-4 lead in the first four minutes of the game, coming out scorching hot from the field to open the season. The Hurricanes then quickly began to claw their way back, using an 11-2 run to pull within four with 2:38 on the clock.

The Raiders led 23-17 after one period of action behind 11 points from senior guard Symone Denham.

Miami knocked down three 3-pointers in the first six minutes of the second quarter to take its first lead of the game. Two came from Woods and she assisted on the other one, which was by freshman guard Laura Cornelius. The first points of Cornelius’ young career gave Miami its first lead of the season, 32-30, with 4:19 left before the break.

“We came after them. I was either going to get down another ten [points], or we were going to change the game with our pressing and speed it up a little bit,” Meier said of what changed after Wright State’s opening run. “Most coaches wouldn’t have done that in that situation, but I just figured that I liked my depth and I was going to trust my team.”

Sophomore forward Erykah Davenport, making her first-career start, scored just before the buzzer off a nice pass from junior guard Adrienne Motley to give Miami a 40-37 edge heading into the locker room. Woods and redshirt junior Keyona Hayes combined for 19 points in the opening session, while redshirt senior guard Kim Demmings had 17 for the Raiders.

The third quarter was the Jessica Thomas show for Miami. The Gainesville, Fla. native opened the half with an immediate steal and a basket to set the tone. Thomas went on to finish with 13 points on 5-of-8 shooting in the frame, including 3-of-5 from long range, helping the Hurricanes earn a 61-53 advantage through 30 minutes.

Miami continued to extend its lead in the fourth quarter, as the team maintained its strong shooting from beyond the arc to seal the victory. The Hurricanes finished the game 12-of-27 (44.4 percent) on 3-point attempts and three different players each made at least three.

In addition to Thomas and Woods, both Hayes and Motley logged at least a dozen points, too. Hayes, making her return to the court after missing all of last season due to injury, finished with 14 points and a team-high nine rebounds. Motley made four of her final seven shots to conclude with 13.

Wright State’s Demmings, the 2013-14 Horizon League Player of the Year, led all scorers with 27 points and junior center Richelle van der Keijl logged a double-double with 10 points and 12 rebounds. Denham finished the game with 17 points for the Raiders, who have posted 25-plus wins each of the last two years.

“Wow, this was the toughest opening game in my career,” Meier said. “They’re a very talented team and I believe they’ll be an NCAA Tournament team. I believe they are capable of winning 30 games, so that was a big win for us.”

The Hurricanes will be back on the court Sunday at 4 p.m. when they host Bethune-Cookman at the BankUnited Center.