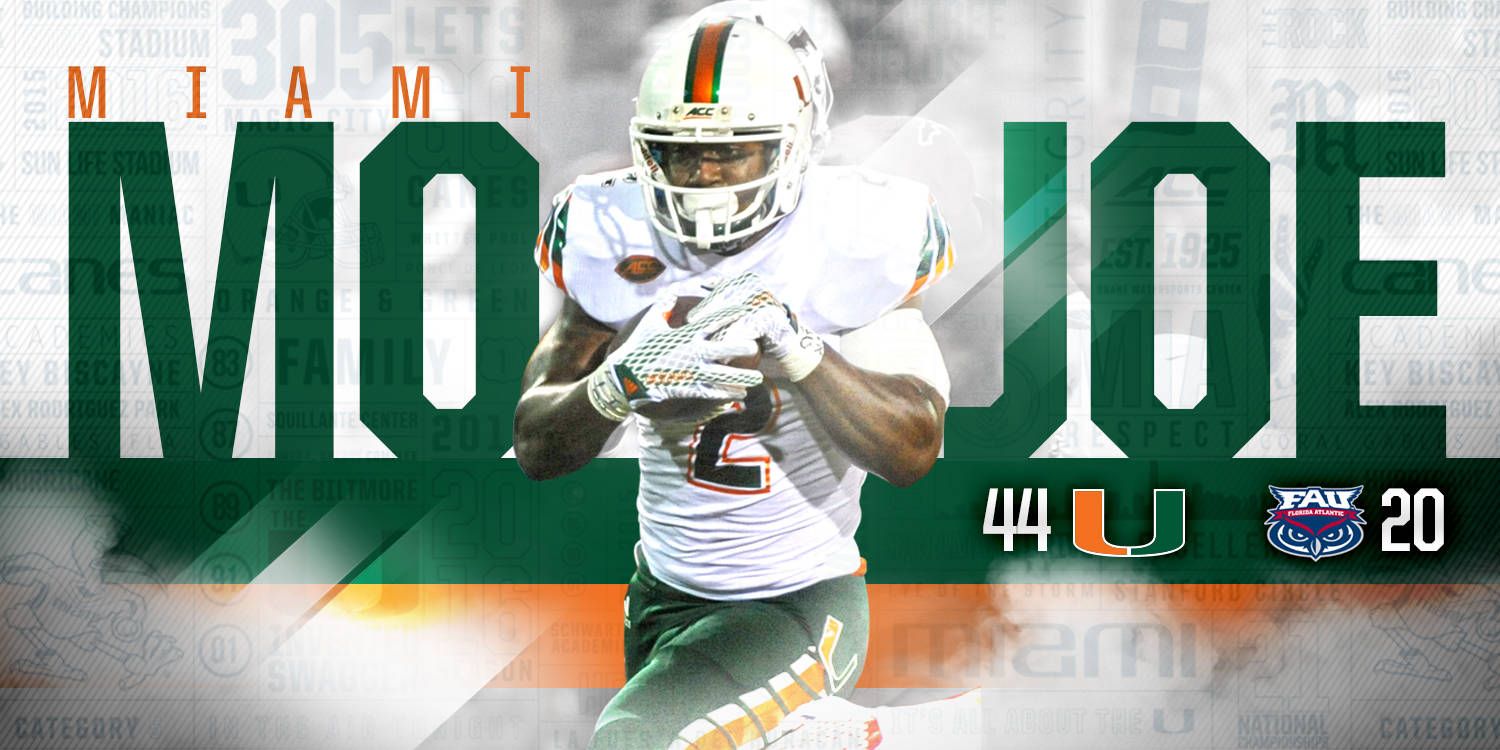 BOCA RATON, Fla. (AP) – For the first time, FAU Stadium was filled to the brim.

Most of the few left at night’s end were Miami fans — very, very relieved Miami fans.

Brad Kaaya passed for 287 yards and a touchdown for Miami (2-0), which got all it wanted from the Owls — who lost running back Jay Warren in the first half and played most of the night with backup quarterback Jason Driskel seeing his first collegiate action. And it still was a 20-20 game in the third quarter, before the Hurricanes pulled away with 24 unanswered points.

Warren finished with 132 yards on just 11 carries and scored a touchdown for the Owls (0-2), who drew a stadium-record 30,321 for the game. Driskel also threw for a score in a game interrupted for 67 minutes in the first half by lightning.

The Owls were thinking upset, and for a while it seemed like they had a real chance. But in the end, the combination of too much Miami offense talent and too many FAU mistakes — five turnovers in particular — was too much for the Owls to overcome.

FAU set the tone on the mistake front early, denying itself what would have been a three-and-out on the first Miami possession with a personal foul penalty. The Hurricanes scored on that drive on a 4-yard run by Walton, then made it 14-3 later in the first when Kaaya found Yearby with a short pass over the middle and the sophomore finished off what became a 34-yard score by dragging FAU defenders the final seven yards.

For Kaaya, it was his 15th career game, and his 15th with a touchdown pass.

It turned into one — eventually.

FAU outplayed Miami for long stretches of the first half, tying the game at 17 when Warren scored midway through the second quarter. It was tied again early in the third, before Walton and Yearby took over.

The night belonged to Yearby, who became the first Miami player since at least 1980 with 146 rushing yards and 97 receiving yards in the same game. His 1-yard scoring run midway through the third put the Hurricanes up for good, and Walton finished it off with two more scores in a span of 7 minutes.

FAU outgained Miami 292-231 in the first half, going into the locker room down just 20-17. But the second half was all Miami, with the Hurricanes outscoring the Owls 24-3 and outgaining them 295-97 in the final 30 minutes.

And when the game ended at 12:42 a.m., most everyone was long gone from what was a sold-out stadium.

It was FAU’s first time hosting an opponent from one of college football’s five power conferences in the Owls’ 5-year-old stadium, and they broke out all the stops. Howard Schnellenberger — who coached Miami to its first national title in 1983 and then was the founding father of FAU’s program — was on the field that bears his name for the coin toss, and the Owls were playing with plenty of emotion.

“With being full, sold-out for the first time ever, all that just adds more to the emotion of the night,” FAU athletic director Patrick Chun said. “It’s a great night for our stadium. It’s a wonderful night for our football program.”

It just didn’t come with the fairytale ending.