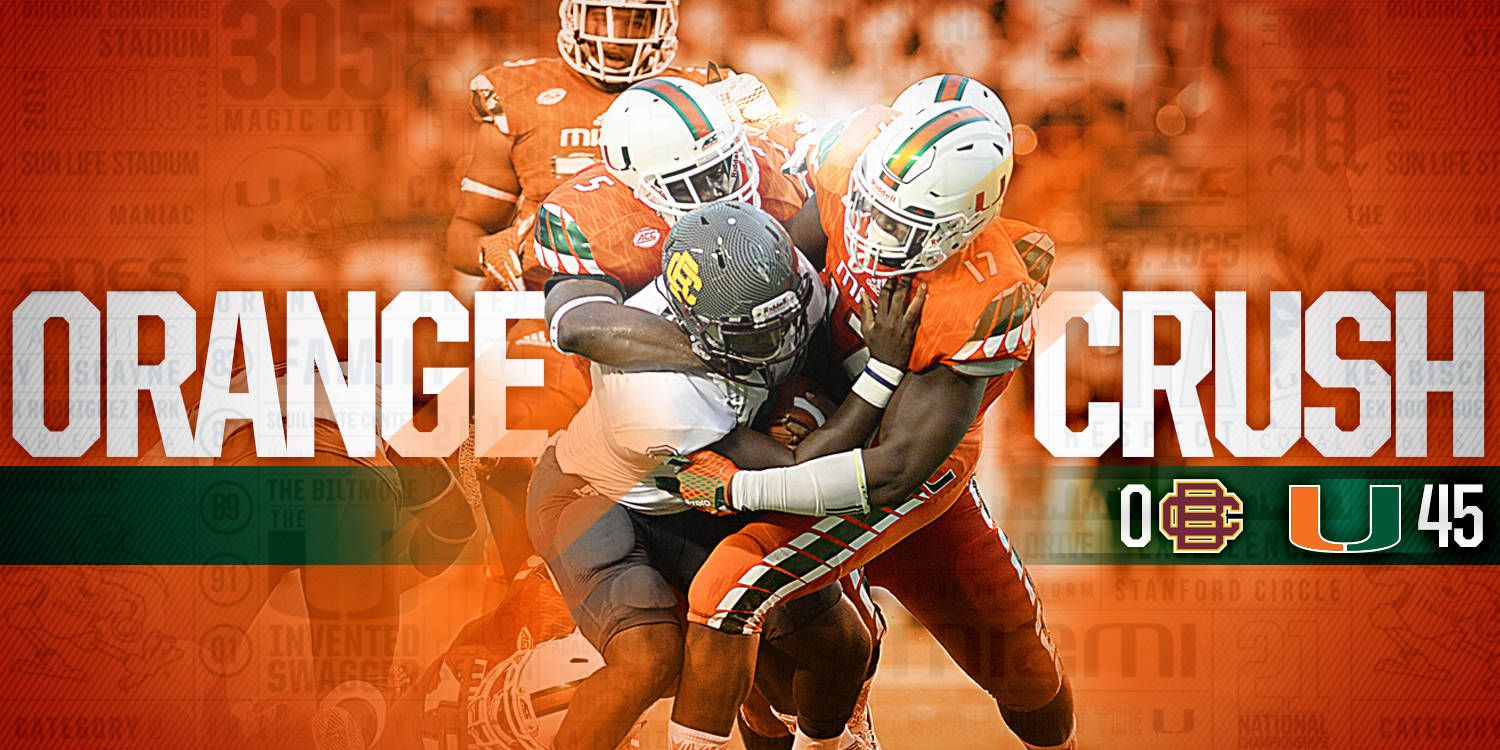 They mattered plenty to Miami.

Brad Kaaya passed for 173 yards and two touchdowns in less than three quarters, Elder took a punt return 72 yards for a score after having another nullified by an unusual call and Miami beat Bethune-Cookman 45-0 in a lightning-delayed game on Saturday night. It was Miami’s first shutout under coach Al Golden; the Hurricanes’ last was a 45-0 win over Florida A&M on Sept. 2, 2010.

But the biggest victory of all might have been Knighton getting on the field. The reserve offensive lineman suffered a life-threatening heatstroke on Feb. 24, 2014, spent 12 days in a coma and lost 55 pounds, and made his long-awaited debut after many surmised he would never get the chance to play for Miami.

“I think it’s the final piece to his healing and to our healing,” Carole Knighton, the lineman’s mother, told The Associated Press just after the play while surrounded by friends, family and even some of the medical personnel who worked with her son after the heatstroke. “It is God-given, Hunter-driven and it is a miracle. He was saved for a reason.”

Knighton’s first play came on a field goal try that was washed away by a penalty in the first quarter, as his mother sobbed tears of joy. He started getting regular offensive line snaps in the third quarter, when the Hurricanes were substituting liberally.

“It was amazing,” said Knighton, who acknowledged having some pregame butterflies — especially since he hadn’t played a game since 2012, after being redshirted as a freshman. “It’s weird; I kind of forgot how that felt, being able to run around and play football again. … I’m back and that’s where I want to be.”

Miami won its ninth consecutive home opener, but didn’t escape unscathed and lost two wide receivers in the first quarter. Braxton Berrios left with a knee injury that had the Hurricanes concerned, and Stacy Coley departed with an ankle injury. There was no immediate word on the severity of either injury and Berrios was taken to a hospital for further examination.

“I think they’ll be all right,” Golden said.

Bethune-Cookman was held to 79 yards of offense, the fourth time since 1996 that Miami held an opponent under 100 yards. Miami had 379 yards.

“I think the first positive we take from this game is we that we did not quit,” Bethune-Cookman coach Terry Sims said after his debut leading the Wildcats. “We kept playing. We did not care about the score, we kept playing hard and I love these guys for that.”

Elder returned two punts for scores in the second quarter. Only one counted.

He had a punt return for a score erased early in the quarter after officials determined another Miami player waved his arms to indicate to the Wildcats there would be no play on the ball and it therefore could not be advanced. The game was then delayed more than an hour by lightning and the second half was shortened to 20 minutes.

“It felt great,” Elder said. “You always want to start off the season right.”

Rayshawn Jenkins — who lost his entire 2014 season due to injury — and Artie Burns had interceptions for Miami, which makes the 45-mile trek north and visits Florida Atlantic (0-1) on Friday night.

“Was it perfect? No, it wasn’t perfect,” Golden said. “But we’re going to learn a lot as a team.”