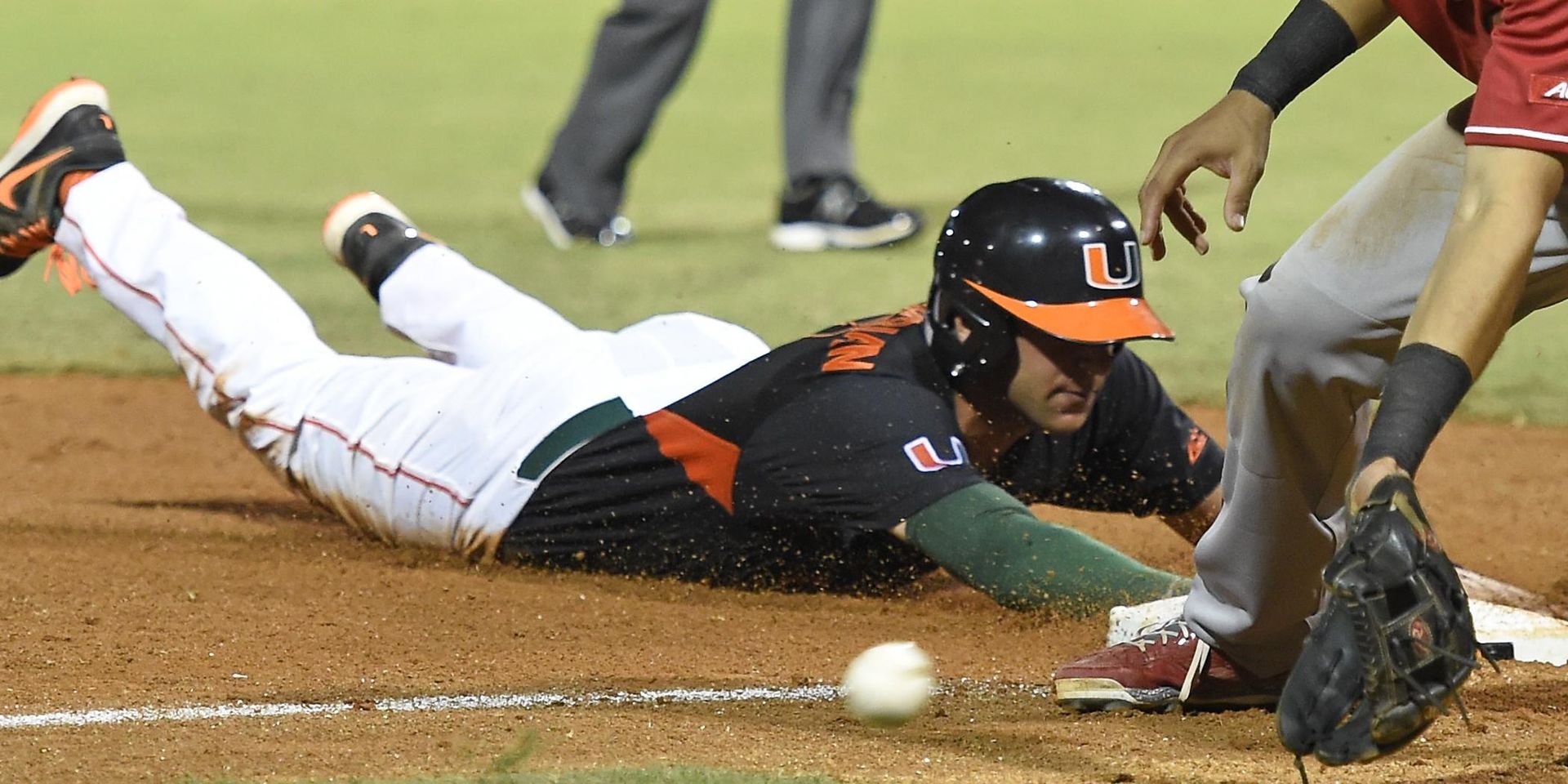 No. 13 Baseball Falls in 17-Inning Marathon

CORAL GABLES, Fla. – No. 13 Miami rallied to tie the game on four different occasions, including three times in extra innings, but ultimately fell to No. 12 Florida State 8-7 in a game that tied for the longest in program history at 17 innings.

The game, which took exactly six hours to complete, set a new record as the longest contest in Mark Light Field history and tied for the longest in program history – a similar 17-inning affair against the rival Seminoles in Tallahassee in 2000.

Miami fell behind 5-4 in the 11th inning but tied the game 5-5 when a wild pitch from reliever Cobi Johnson made its way to the backstop, scoring first baseman Christopher Barr from third.

The Hurricanes (30-12, 15-7 ACC) again trailed by one run in the 13th, but junior Ricky Eusebio came up with a two-out RBI single through the rightside to tie the game 6-6.

Junior George Iskenderian helped Miami manufacture a run in the 14th to tie the game at seven. After drawing a leadoff walk, Iskenderian stole second, took third on a wild pitch and scored on a throwing error by Florida State catcher Danny De La Calle.

Though Brandon Lopez reached on a single to open the bottom of the 17th, he was doubled off at second base on a flyout to center to end the game.

Trailing 4-0 in the middle innings, the Hurricanes got a run back in the sixth on a sacrifice fly from sophomore Willie Abreu, and tied the game 4-4 with a three-run seventh inning off the FSU bullpen.

The 4-4 stalemate lasted until the 11th when Florida State took its second lead of the night at 5-4 on a bases-loaded walk.

The Hurricanes were outhit 16-11, and had only two hits in the first seven innings. The two teams combined to leave 29 runners on base with 26 strikeouts.

A leadoff double by Carl Chester got Miami’s rally started in the seventh, and a sacrifice bunt attempt by Eusebio was mishandled by Florida State reliever Drew Silva, plating the speedy Chester on the overthrow to third base.

After a walk to Iskenderian put two runners on base, sophomore Zack Collins cracked a one-out single to rightfield to score Eusebio and cut the deficit to 4-3.

Another sacrifice fly – this one from David Thompson – completed Miami’s comeback and tied the game 4-4.

An RBI double to left from Dylan Busy plated Nieporte (double) to open the scoring in the second.

Niepore doubled the Seminoles’ lead on the first pitch he saw from Woodrey in the fourth inning, taking the lefthander deep for his fourth home run of the season. De La Calle made it 3-0 on a home run of his own to open the fifth, one of wo Florida State runs in the frame.

Woodrey exited with his team facing just a 4-1 deficit in the seventh. The Lighthouse Point, Fla., native delivered an efficient 85-pitch outing, tossing at least six innings for the 10th straight start this season. He walked just one batter and received an ovation from the 4,189 – Miami’s largest crowd of the season.

The Hurricanes struggled to generate much offense in the early going off FSU starter Boomer Biegalski, who fanned five batters in 5.1 scoreless innings.

Miami returns for game two of its series with Florida State on Saturday. First pitch for the game, slated for broadcast on ESPNU, 560 WQAM and WVUM 90.5 FM, is slated for 7 p.m.