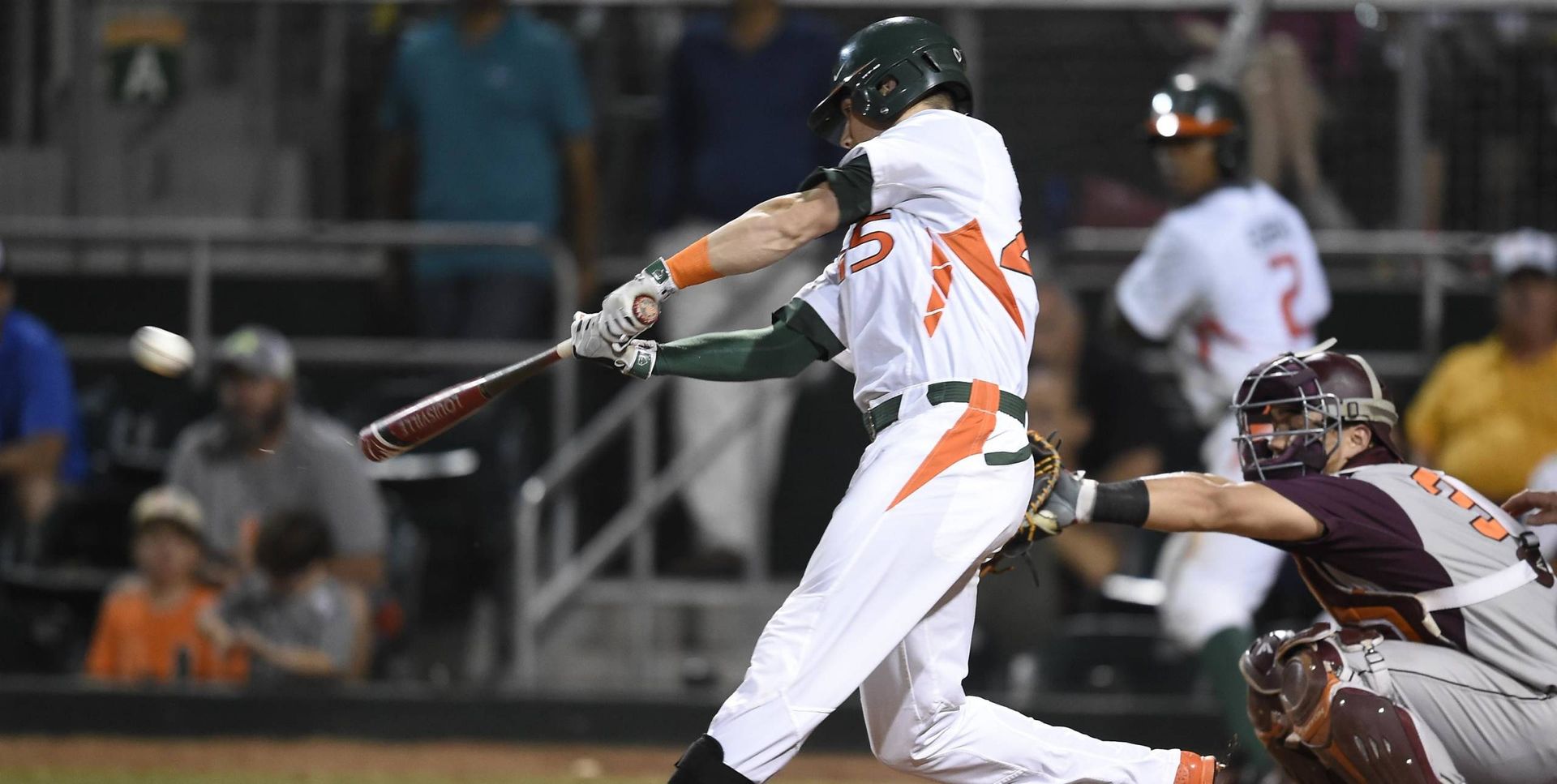 Offense Dominant in 14-4 Win Over Hokies

Paced by a strong showing on the hill from lefthander Andrew Suarez and a seven-run explosion in the fifth inning, Miami cruised to its seventh straight victory to open the month of April.

With the win, the Hurricanes (27-9, 13-4 ACC) maintained their four-game lead in the ACC’s Coastal Division and improved their home record to 20-2.

“I thought it was a team effort. I don’t think there was one guy who particularly stood out amongst everybody,” head coach Jim Morris said.

If anybody deserved the singular praise, it was Suarez (4-0), who tossed 6.0 innings and allowed all three of his charged earned runs in his final inning of work after Miami took an 11-1 lead.

Though he ran into late trouble he exited with back-to-back strikeouts and dominated for the game’s first five innings.

The Miami native completed his outing on his 88th pitch of the night (62 strikes), drawing an ovation from the crowd of 2,930.

“Andy’s always great. It’s hard to talk about him too much, because he has always gone out there and given it his all,” said catcher Zack Collins. “No matter what he has that day, he battles.

“He always gives us his best and a chance to win, and that’s what he did tonight.”

For the second consecutive game, Miami jumped on Virginia Tech’s starting pitcher for an early lead. The Hurricanes tagged Hokies lefthander Jon Woodcock for four runs in the second inning, jumpstarted by a solo home run from Collins on the first pitch he saw from Woodcock. (2-2)

The home run was Collins’ fifth of the season.

Woodcock then allowed an infield single to junior David Thompson before issuing back-to-back walks to load the bases.

The Hurricanes (27-9, 13-4 ACC) came through on the scoring opportunity, as freshman Carl Chester belted a long RBI single off the outfield wall in left and senior Garrett Kennedy connected on a two-RBI double down the leftfield line to bump Miami’s lead to 4-0.

That was all Suarez would need. The redshirt junior lefthander was in command from the outset, retiring the first nine batters he faced before leadoff hitter Raheim Cooper opened the fourth inning with an infield single.

Suarez struck out six batters and walked just one, but allowed three runs in the sixth after Miami had exploded for seven runs in the previous half-inning.

“Andy pitched very well for the first five innings. When we went out and scored all those runs, I think he might have lost some concentration there in that one inning,” Morris said.

Miami blew the game open by sending 11 batters to the plate in the fifth. A walk to George Iskenderian and an error on Virginia Tech leftfielder Mac Caples put two runners on base for Thompson to open the frame.

Thompson’s groundball to third was misplayed and resulted in the first run of the inning. Reliever Luke Scherzer retired the next two batters before Miami capitalized on another Hokies defensive miscue.

A pop-up to shallow center from first baseman Christopher Barr was misplayed and scored two more runs to move Miami’s lead to 5-1, while a two-RBI single from junior Ricky Eusebio made it 7-1.

A two-RBI double from Iskenderian capped Miami’s scoring and gave the Hurricanes a 9-1 advantage.

“One of the toughest innings to pitch is after a big inning,” Morris said. “To go back out after you’ve been sitting in the dugout for a long time, I feel that’s kind of what happened.”

Miami tacked on two more in the sixth on an RBI single from Brandon Lopez and an RBI groundout from Eusebio.

Miami will wrap up its series with Virginia Tech Sunday at Mark Light Field. First pitch for the finale, slated for broadcast on 560 WQAM and WVUM 90.5 FM, is set for 1 p.m.