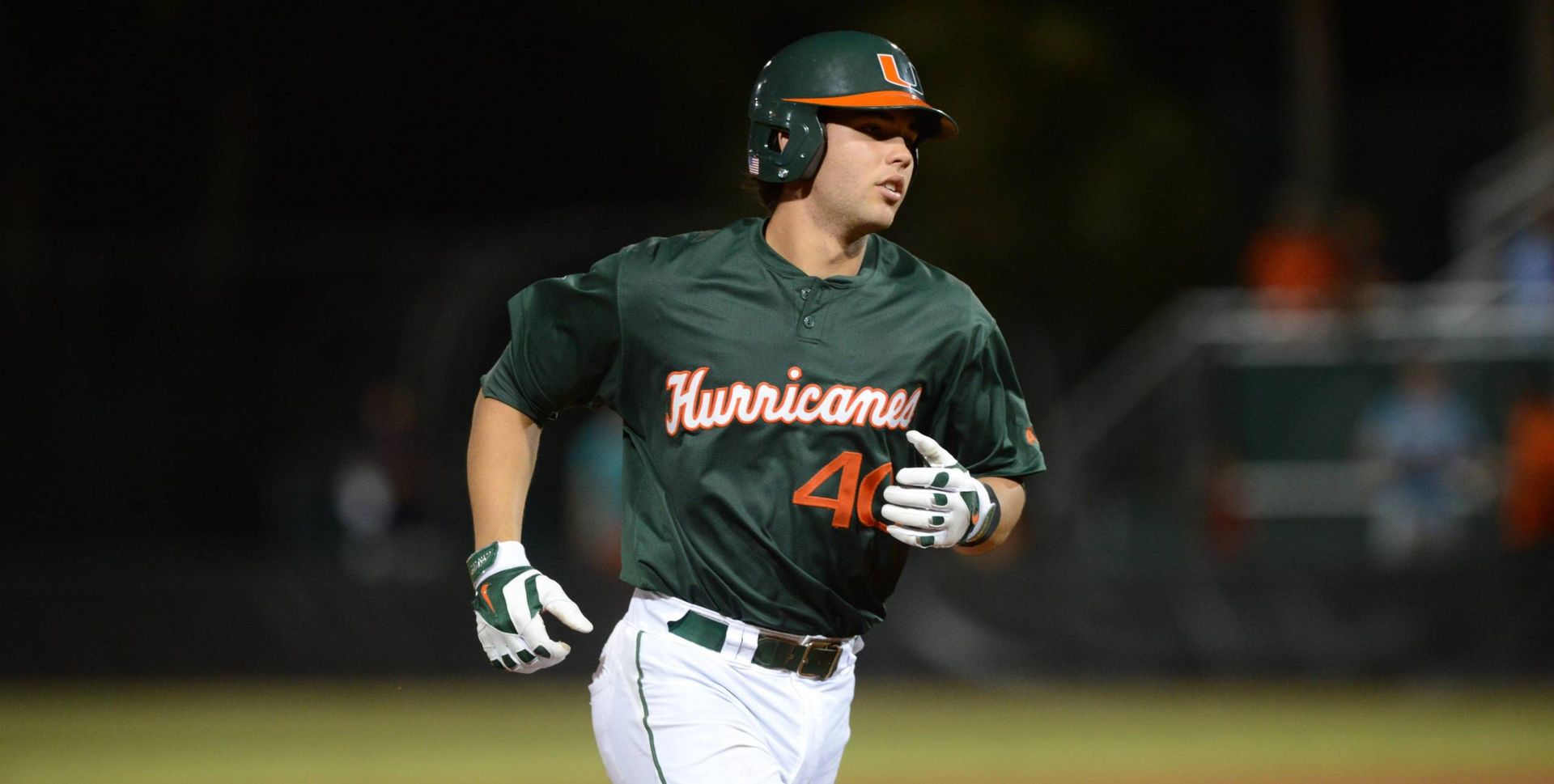 Kennedy Lifts No. 12 Baseball to 4-3 Victory

CORAL GABLES, Fla. – Garrett Kennedy delivered the go-ahead hit in the bottom of the seventh inning, lifting Miami to a 4-3 win over Duke Friday night at Mark Light Field.

Kennedy tied a career high with three RBI, including two on a one-out single off Blue Devils lefthander Mitch Stallings that broke a 2-2 deadlock.

Sophomore closer Bryan Garcia, who tossed the final 1.2 innings, earned his sixth save of the season.

It was Miami who struck first Friday night at Mark Light Field, with Duke lefthander Dillon Haviland allowing two runs in the bottom of the second inning.

The Hurricanes (22-9, 9-4 ACC) opened the frame with three straight basehits, including a leadoff single from George Iskenderian and a double from Willie Abreu that put two runners in scoring position for catcher Garrett Kennedy.

The senior capitalized on the scoring chance, stroking an RBI single and beating a Blue Devil defensive shift with a basehit through the rightside. A sacrifice fly from freshman Carl Chester doubled Miami’s lead to 2-0 before Haviland retired David Thompson to end the inning.

Duke tied the game in the fourth when Peter Zyla connected on an RBI triple to right and completed his trip around the bases on a Miami throwing error.

Despite the two-run rally, Miami lefthander Thomas Woodrey was typically efficient. He was pulled after 6.0 innings, having allowed just two hits with two strikeouts.

He threw 92 pitches with two strikeouts and just one walk, and went at least six innings for his seventh straight start this season.

After jumping out to an early lead, Miami was largely subdued by Blue Devils pitching through the middle innings, stranding 10 through the first six innings.

Hurricanes bats finally came alive in the seventh, when Iskenderian blooped a single into shallow right and Abreu connected on his second double of the night on a ball misplayed by the Duke outfield. Kennedy once again came through in the clutch, cracking a single to right-center that plated both runners to give Miami a 4-2 lead.

Things got dicey for Miami in the eighth, when Hammond allowed the first two Duke batters to reach on back-to-back singles. Sophomore closer Bryan Garcia entered with one out, and allowed one runner to score on a wild pitch before retiring Cris Perez and Jalen Phillips on back-to-back strikeouts to wiggle free with Miami maintaining a 4-3 lead.

Thompson became just the eighth Hurricane to ever record a hitting streak of 20 or more games with an eighth-inning single. Miami outhit Duke 13-4 on the night, but stranded 14 runners.

Garcia retired Duke in order in the ninth to lock down his sixth save of the year.

The Hurricanes return to Mark Light Field Saturday for game two of their weekend series with the Blue Devils. First pitch for the game, slated for broadcast on WVUM 90.5 FM, is set for 7 p.m.