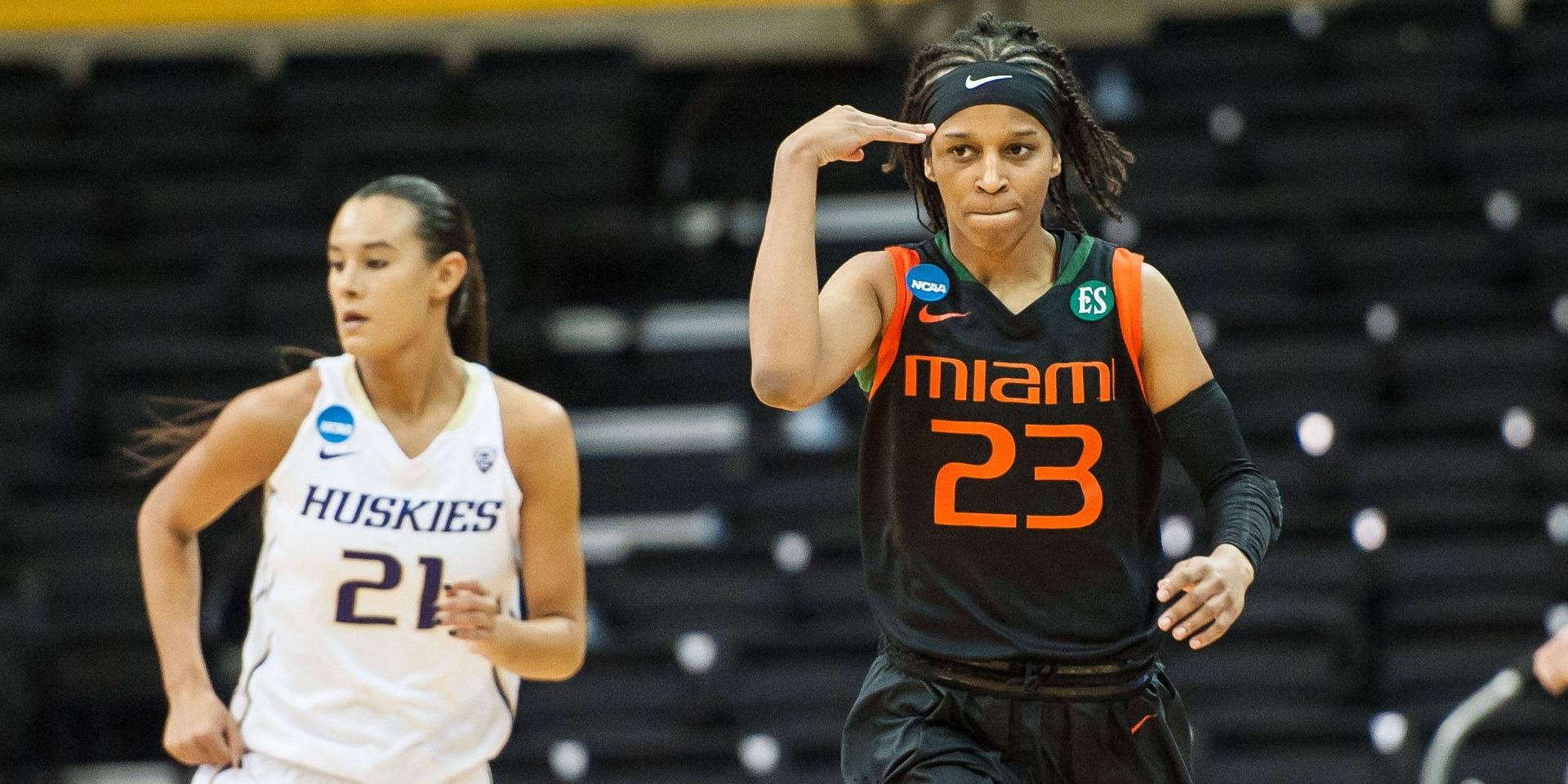 IOWA CITY, Iowa – The University of Miami women’s basketball team advanced to the second round of the NCAA Tournament for the third time in the last five years by knocking off sixth-seeded Washington Friday afternoon.

Led by a program NCAA Tournament record-setting 30 points from sophomore guard Adrienne Motley, No. 11 seed Miami took down the Huskies, 86-80, at Carver-Hawkeye Arena and picked up its 20th win of the season as well. The 86 points matched the most in an NCAA Tournament game in program history.

“That had to be one of the most fun games to coach in that I’ve had in my career, and it had to be awesome for the fans and for television,” Miami head coach Katie Meier said. “I think there were 13 ties in the game.  The players were just making plays.  It was just a beautiful women’s basketball game.  I thought well executed by both teams, and I think when I watch it on film, I’m going to have even more fun.  I just thought it was amazing.”

The first 15 minutes of the game saw the teams trading baskets at each end and the score was even at 28 after guard Michelle Woods hit a three-pointer with 5:04 to go before the break.

That shot by the redshirt junior sparked a Hurricane run, with Woods and Motley doing all the scoring at one end and great team defense at the other. Beginning with Woods’ game-tying three-pointer, the duo outscored Washington 16-5 to close the half.

Miami (20-12, 8-8 ACC) limited the Huskies to two makes on the final 16 shots of the session. Meanwhile, the Hurricanes hit six of their final eight shots before the intermission. Senior forward Necole Sterling was also big for Miami in the first half, scoring 10 points on 4-of-4 shooting.

Motley opened the second half with a three-pointer to push the Hurricanes’ lead into double figures for the first time all game. The Huskies then responded with a 9-2 run to trim Miami’s advantage to four, 46-42, with 16:52 on the clock.

The Hurricanes would not relent though, countering with an 8-2 spurt to get the advantage up to 10, but once again Washington made a run. The Huskies scored 11 straight points to take a one-point lead, 55-54, with 10:47 remaining.

The Huskies evened the score 16 seconds later with a three-point play, but Miami yet again mounted a run in response. The Hurricanes scored six straight points to take a six-point lead and they would not let this advantage slip away.

Miami made 16 of its final 22 free throws in the game, enough to hold off Washington, which hit some tough shots down the stretch. Freshman forward Erykah Davenport, who had a career-high and game-high 13 rebounds, grabbed a board with six seconds left and then sank a pair from the line to ice the game.

In addition to Motley, who led all scorers, three other Hurricanes posted double figures in the game. Sophomore guard Jessica Thomas had 19, Woods had 17 and Sterling had 11. Miami had a season-low four turnovers in the game and made a season-high 58.3 percent of its three-point field goal attempts (7-of-12).

“I think we got 66 of our 86 points from our three starting guards,” Meier said of Motley, Thomas and Woods, “and yet that’s not what we are going to talk about.  It’s going to be their defensive effort.”

Miami will play in the round of 32 Sunday in Iowa City against the winner of the afternoon game between third-seeded Iowa and 14-seed American. The game is scheduled for 12:00 p.m. ET at Carver-Hawkeye Arena.