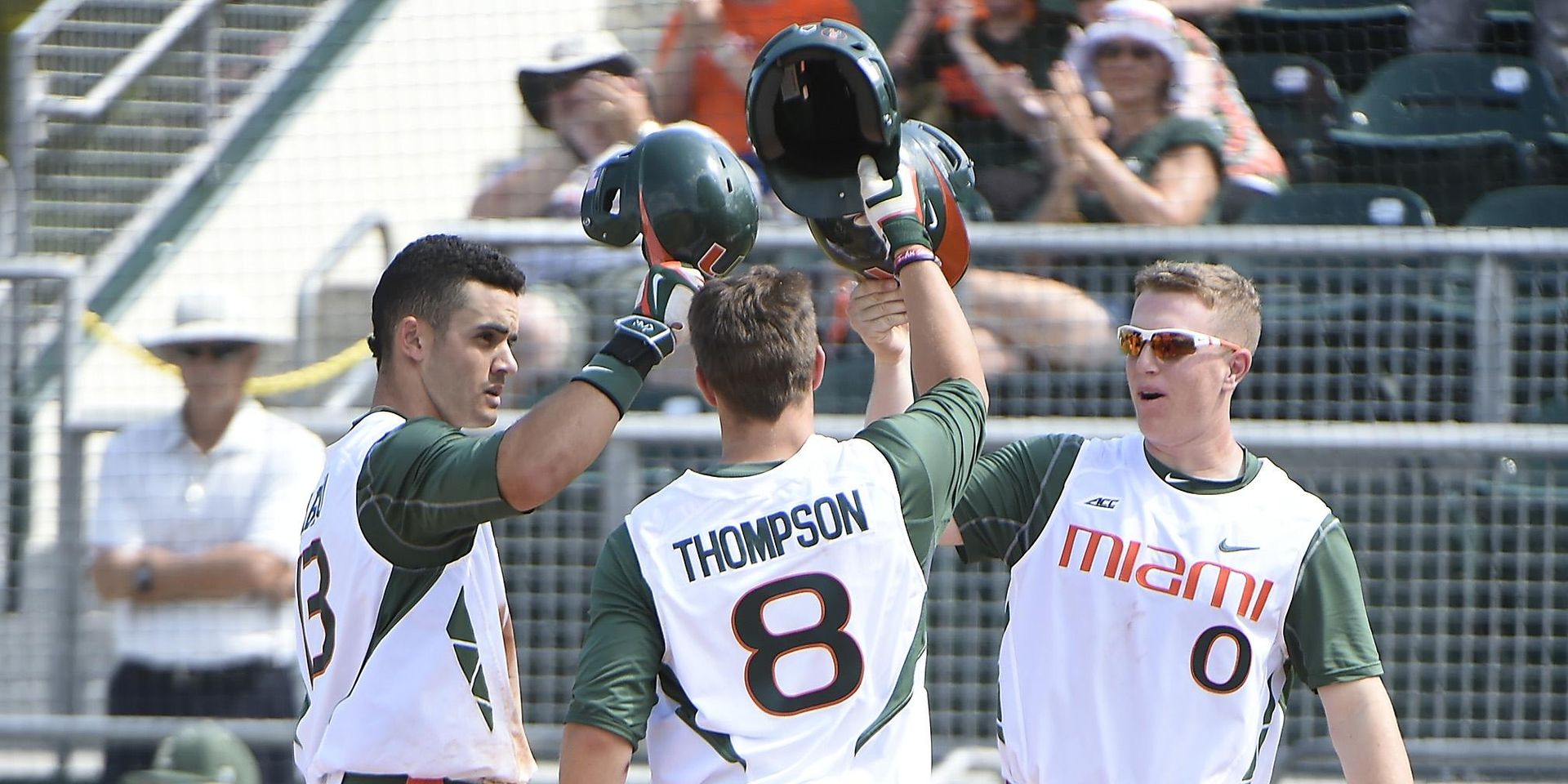 CORAL GABLES, Fla. – Junior David Thompson was recognized with ACC Player of the Week honors Monday after powering No. 17 Miami with a prolific week at the plate.

The way Thompson performed Tuesday against Army, he could very well be the leading candidate for the award once next Monday rolls around.

Thompson hit two more homers – including a third-inning grand slam that brought his team-leading total to six on the season – and drove in five, sending Miami to its sixth straight win, this one over the Black Knights by a final score of 9-1.

The multi-home run game was a first for Thompson, who has 18 RBI in the last six games.

“I was feeling comfortable at the plate, like I have been the last couple of weeks,” Thompson said. “Just putting good swings on some pitches. Hopefully I can stay hot the rest of the year.”

The grand slam was the first of Miami’s season, and the first for a Hurricane since Dale Carey hit one at Duke last May. Both of Thompson’s home runs were towering blasts.

“I knew they were gone when I hit them,” Thompson said with a smile.

The significance of playing Army was not lost on head coach Jim Morris.

“”I thought we played a good game. It’s nice to play Army. It’s an honor, really. They’re playing for Army, but at the end of their school, they have a five-year commitment to serve for our country,” Morris said. “I respect what they’re doing. They played hard, they’re well-coached, and it’s an honor to be out there playing against them.”

Garcia struck out six and walked just one, picking up a win for his third straight start. The Miami native said the five-run cushion by the third inning allowed him to focux on executing.

A two-run home run from George Iskenderian in the fourth inning moved Miami’s lead to 8-1.

“It definitely helps with [that kind of] run support,” Garcia said. “It didn’t get me comfortable, but when I see that big of a lead, I can stay focused.”

Iskenderian also made a nifty play in the top of the third, ranging to his left and stranding two runners with a throw from his knees for the final out of the inning. The play kept the score deadlocked at 1-1.

Miami would score five runs in the bottom half and never look back.

The Hurricanes (16-6), who had not faced the Black Knights since 1975, fell behind 1-0 in the second inning on an RBI single from Alex Dickerson. From that point forward, it was all Miami.

Thompson tied the game in the home half of the same inning on a solo home run, and in the third, he connected on his first career grand slam to bump Miami’s lead to 6-1.

“Anytime you’re behind, you don’t know what’s going to happen,” Morris said. “It was a big home run, the first one, to tie the game up. The grand slam puts us up, so you can relax and play a bit.”

Miami improved to 5-1 in midweek games with the victory.

“These midweek games are just as important as the weekend games. You have to play every day, and you have to play hard every day,” Morris said. “I think our guys are doing a good job so far.”

Miami returns to the diamond Friday for its series opener against Wake Forest in Winston-Salem, N.C. First pitch for the game, slated for broadcast on WVUM 90.5 FM and ESPN3, is set for 6 p.m.