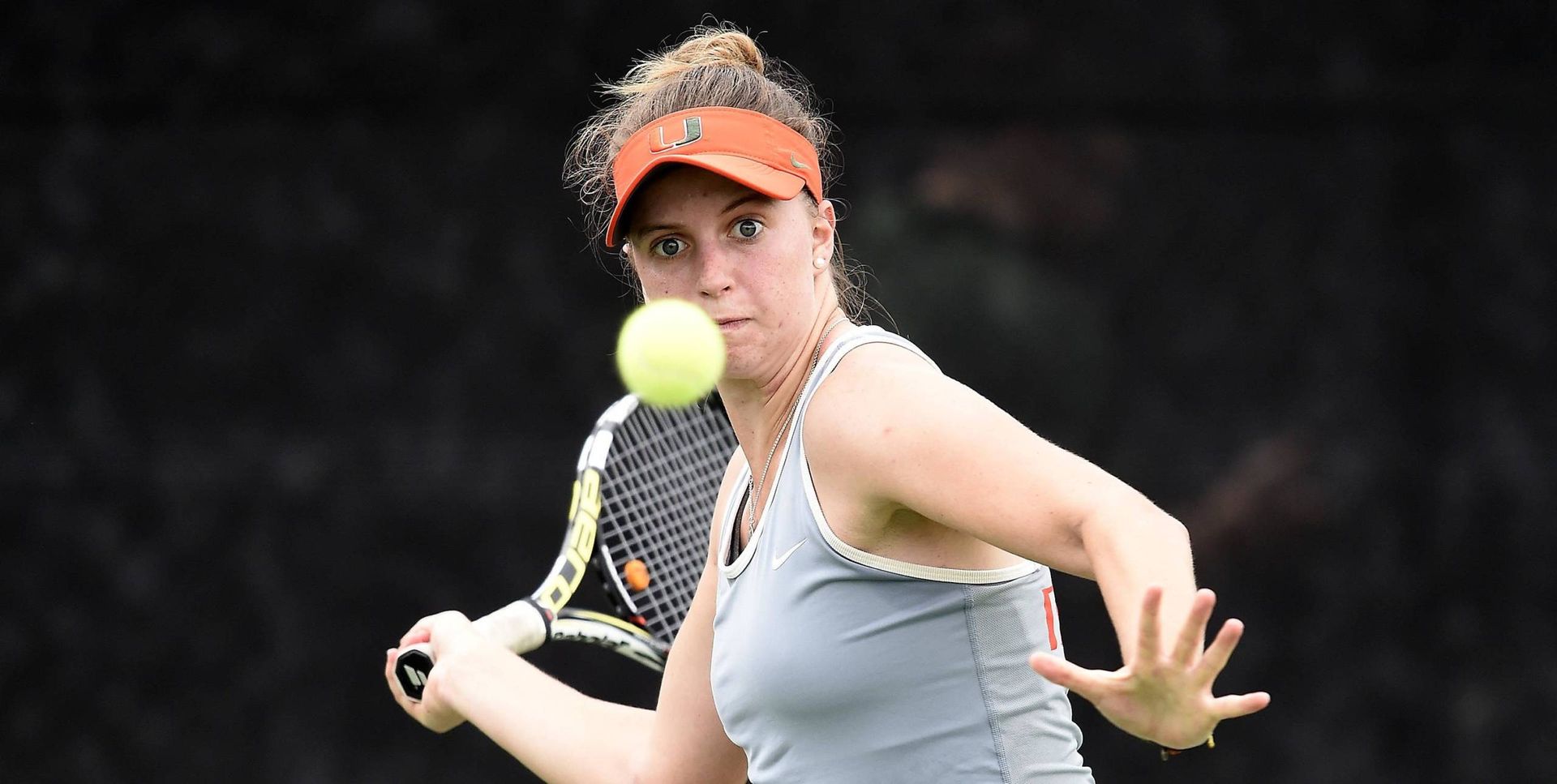 The 14th-ranked Hurricanes took down the Yellow Jackets 6-1 at the Ken Byers Tennis Complex to move to 9-2 (5-0 ACC) on the season.

“Collectively we played a great match,” Miami head coach Paige Yaroshuk-Tews said. “Solid team effort to get the doubles point in and we just took off from there.”

The match was delayed 50 minutes due to wet courts and once it finally began, the No. 19 pair of senior Monique Albuquerque and junior Clementina Riobueno quickly took care of business. The duo won 8-1 over Rasheeda McAdoo and Alexa Anton-Ohlmeyer to give the Hurricanes the early edge in doubles.

The other two matches were back and forth affairs that came down to the very end until one finally finished. It was Sinead Lohan and Wendy Zhang who wrapped their match up first and gave Miami the win.

The freshman pair had to fight back to pick up their victory and they did so in impressive fashion. They dropped five of the first six games against Natasha Prokhnevska and Johnnise Renaud, but then things began to change.

Lohan and Zhang won five straight games to take a 6-5 lead. The pair from Georgia Tech (5-5, 2-2 ACC) then leveled the score at 6-6, but Miami’s duo countered, winning the next two games for an 8-6 win, clinching the doubles point.

Senior Lina Lileikite and junior Stephanie Wagner, ranked eighth, led 7-6 over No. 35 Paige Hourigan and Kendal Woodard when play stopped and their match was left unfinished. It is the third time in five ACC matches they have been within one game of a victory when doubles play ended.

In singles competition, Miami was outstanding, winning five of the six matches. Wagner was the first to finish and she was dominant, coming up with a 6-1, 6-1 victory over Hourgian, ranked No. 64.

Not long after Wagner made it 2-0 Miami, Lileikite added another point to the Hurricanes’ score, as she took down Woodard, 6-2, 6-2 in an impressive effort.

Lohan then clinched the victory for Miami, as she picked up her third win this spring against a top 100 opponent. The Waterford, Ireland native won 6-3, 6-2 over Renaud, ranked No. 92, in her first ever ACC match at the first singles position for the Hurricanes.

“We absolutely dominated at one, two and three today,” Yaroshuk-Tews said. “I was happy that Sinead and Steffi reacted so positively to our lineup change at one and two.”

Although the result was decided, three matches remained. Senior Monique Albuquerque’s was the first of the trio to finish, as she wrapped up a 7-6 (7-3), 6-3 win over Anton-Ohlmeyer to put Miami ahead 5-0.

Megan Kurey gave the Yellow Jackets their lone point on the day with a comeback win over Riobueno, who is ranked No. 63. It was a narrow defeat for Riobueno, who won the first set, lost the second in a tiebreaker and then fell in a 10-point tiebreaker in place of the third set. Kurey came away with a 3-6, 7-6 (7-4), 1-0 (10-4) victory.

The final match of the day went to the Hurricanes, as freshman Yolimar Ogando won a tight one over Alexis Prokopuik, 7-5, 7-6 (7-2) to make it a 6-1 final in favor of the Hurricanes.

Miami has now won six straight matches and has outscored its opponents 38-4 in the process, including 32-3 in the five ACC contests.

The Hurricanes will play their final nonconference regular season match Tuesday, March 17 at eighth-ranked Baylor in Waco, Texas. Play is scheduled to begin at 1:00 p.m. and live stats will be available HERE.

“I’m excited to get to Waco [for us to] play another solid team,” Yaroshuk-Tews said.