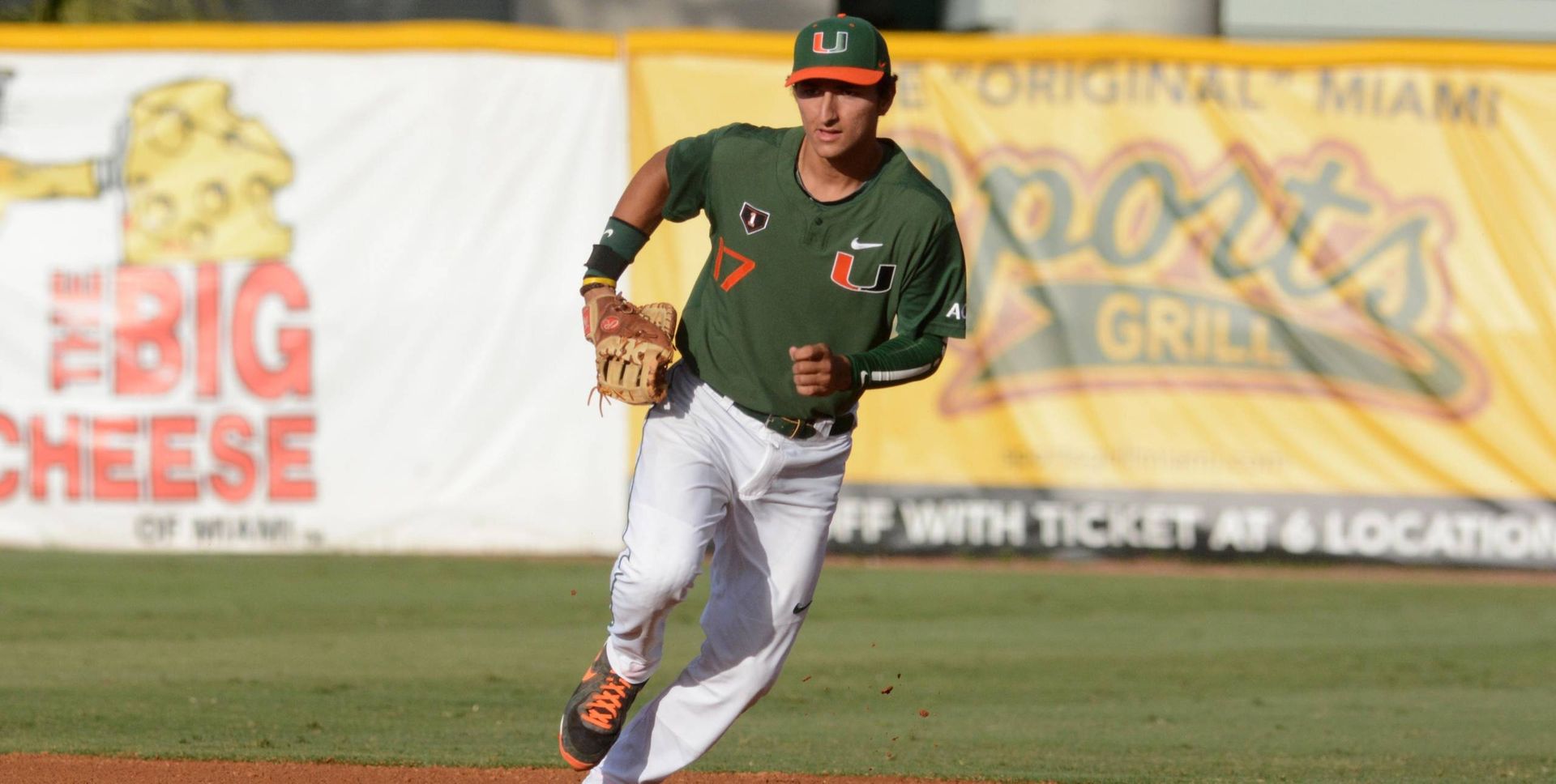 After walking off in extra innings Friday night, Miami scored three runs in the second, cruised through the middle innings, and added three runs of insurance in the seventh and three more in the eighth to improve its home record to 11-1 this season.

Junior Enrique Sosa went a career-long 6.1 innings, striking out six batters and walking none. Though he scattered seven hits, Sosa worked his way out of trouble and drew a standing ovation from the crowd of 2,856 when he exited in the seventh.

Sophomore Christopher Barr reached base three times, finished 2-for-3 with a triple, and smacked the game-winning hit – a second-inning RBI double – in the victory.

“I thought we played very well tonight,” head coach Jim Morris said. “We played good defense, we pitched well and we got some timely hitting. We played the game well. It was a big outing for us.”

Miami (14-6, 3-2 ACC) plated three runs in the second inning to jump out to an early lead, and junior David Thompson – who won Friday’s series opener with a walk-off solo home run in extra innings – once again served as the catalyst with a one-out single.

Making his first career start as a Hurricane, freshman Justin Smith followed with a four-pitch walk. Barr’s RBI double scored Thompson, and a sacrifice fly from sophomore Johnny Ruiz then scored Smith to make it 2-0.

Barr and freshman Carl Chester (hit-by-pitch) then attempted a double steal, and Barr crossed the plate on an errant throw to third from Wolfpack catcher Andrew Knizner.

“Just trying to move the runners over, getting runs in and going base to base,” Barr said of his mentality.

Barr earned his fourth straight start at first base, and came through with another strong performance.

NC State (10-6, 2-3 ACC) looked poised to cut into Miami’s 3-0 lead when it loaded the bases with just one out in the fourth, but Sosa struck out Joel McKeithan and Joe Dunand to strand three runners.

“In the beginning I was throwing a lot of fastballs with a lot of sink,” Sosa said. “The hitters were missing my fastballs inside…at the end I was throwing sliders, so many sliders that they were swinging over.”

The Wolfpack got on the board with an RBI infield single from Knizner in the fifth, but Sosa once again was able to escape serious damage. With two runners on base, Sosa induced a groundball from rightfielder Jake Armstrong that Ruiz smothered, tagging second for the final out of the inning.

Sosa opened the seventh with a strikeout of Jake Fincher before giving way to freshman lefthander Michael Mediavilla. Sosa tossed 93 pitches in the outing, surpassing his previous high of six innings.

“After the sixth, I went into the dugout and thought, ‘They can’t take me out,'” Sosa said with a smile. “They let me go back in, and I threw a strikeout.”

Mediavilla extended his scoreless streak to eight consecutive appearances in an inning of relief.

RBI singles from George Iskenderian and Willie Abreu bumped Miami’s lead to 5-1 in the seventh, while some miscues from the Wolfpack in the bottom of the eighth – including a bases-loaded walk and an infield error – moved Miami’s lead to 9-1 heading into the final inning.

Senior Daniel Briggi allowed the first run of his career in the ninth, but induced a groundout from Wolfpack leadoff hitter Brock Deatherage to secure the win.

“It’s not over with,” Morris said. “I’m not going to feel good walking out of here tomorrow unless we get a sweep. It’s great to win a series, but we need to come out determined to get a sweep.”

Miami returns to Alex Rodriguez Park at Mark Light Field Sunday afternoon for its series finale with NC State. First pitch for the game, slated for broadcast on 560 WQAM, is set for 1 p.m.