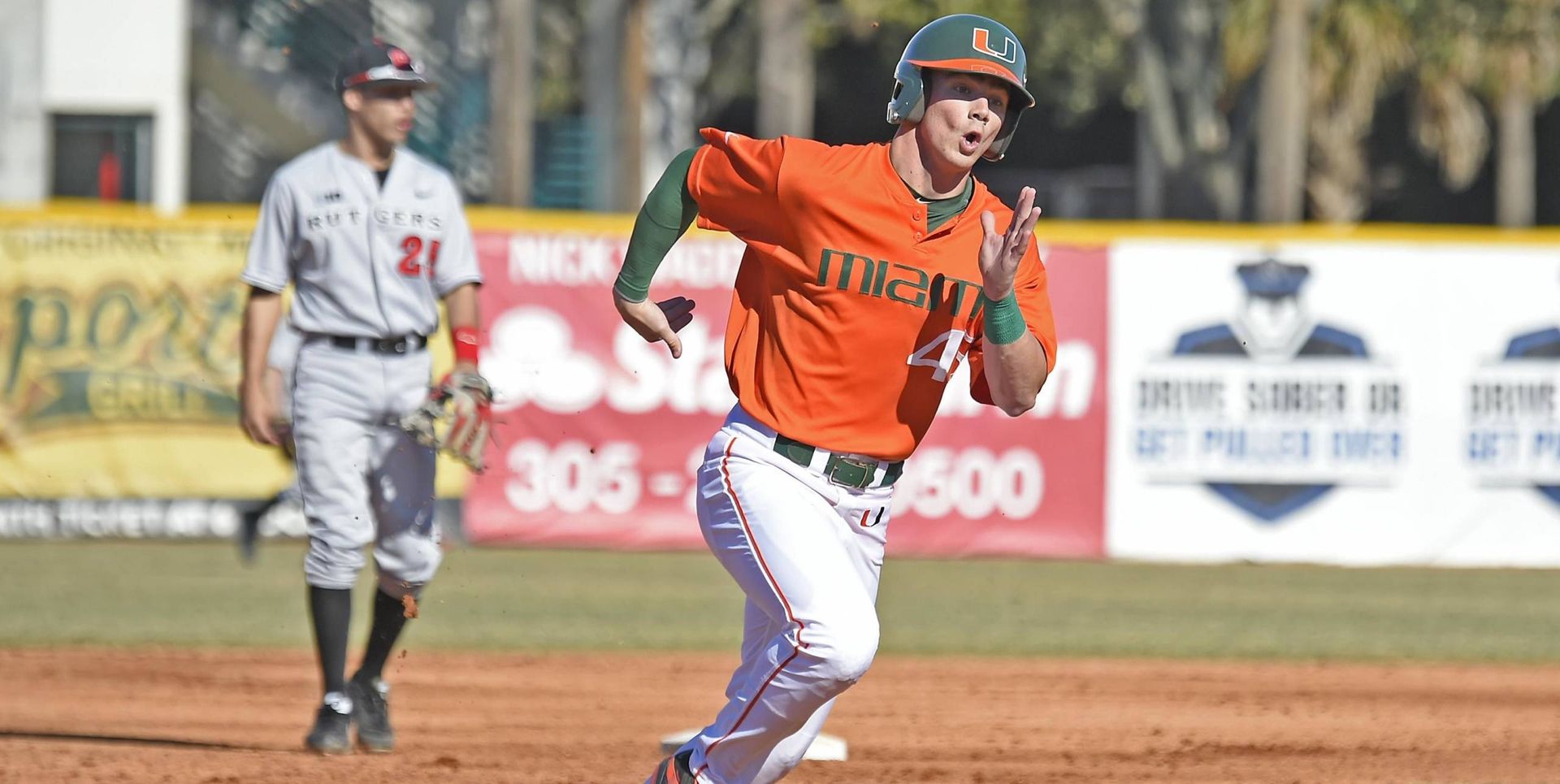 CORAL GABLES, Fla. – No. 19 Miami got all the offense it needed in the first inning, sophomore lefthander Danny Garcia dominated from the outset, and the Hurricanes cruised to a 7-0 win over Stetson Wednesday at Mark Light Field.

Stetson starter Evin Lynch (0-2) was chased before retiring a single batter in the bottom of the first. Freshman Carl Chester opened the game with a solo home run, and Miami recorded seven singles – including six in a row during one stretch – to take a commanding 7-0 lead by the end of the frame.

Miami batted around before reliever Adam Schaly recorded the first out of the inning – a popout from Chester.

“I don’t think I’ve ever seen nine hitters get on base in a row without getting an out,” head coach Jim Morris said. “It was a crazy first inning…it was great to watch.”

Garcia, coming off a strong outing in relief during Miami’s series at Louisville, delivered a scintillating performance on the hill. The Miami native struck out a career-high 11 batters, allowed just three singles, and dominated through seven innings in an outstanding performance.

Morris called it “for sure” the best outing of Garcia’s young career.

The 11 strikeouts were the most by a Miami pitcher this season, as Garcia lowered his ERA to 1.84 by the night’s conclusion.

“Pounding the strike zone,” Garcia said of his key to success. “If I got behind in the count, I would take a deep breath. I always felt confident in myself. Everything worked out as I wanted it to tonight.”

After Garcia opened the game by striking out the side, Miami carried over the momentum into the home half. Just one night after cranking out 15 runs on 17 hits in a win over FGCU, Miami recorded eight hits in the first inning – including six off Lynch.

Chester’s blast cleared the scoreboard in left, junior Ricky Eusebio followed with a single, and sophomore Zack Collins drew a walk to build the threat. The home run was Chester’s team-leading third of the season.

From there, Miami (12-6) ripped off six consecutive singles – one each from George Iskenderian, Willie Abreu, David Thompson, Garrett Kennedy, Christopher Barr and Johnny Ruiz – to bump its lead to 6-0.

“It was nice, yesterday and today, to get some runs and kind of relax,” Morris said. “We have a good bullpen, and our defense played well tonight.”

Lynch was pulled in favor of lefthander Adam Schaly after Kennedy loaded the bases with his basehit, but Schaly allowed hits to the first two batters he faced. An error charged to Hatters first baseman Will Mackenzie on a grounder from Eusebio capped Miami’s scoring at seven runs.

“That was his best outing since he’s been here, for sure,” Morris said.

That was more than enough for Garcia. The southpaw struck out multiple batters in four of his first five innings, and ended his night by inducing a double play from Hatters designated hitter Vance Vizcaino.

Coming off a dominant 4.0-inning outing in relief against Louisville, Garcia threw 94 pitches – 67 of which went for strikes.

“At first it was a little sore – obviously all pitchers get sore,” Garcia said about pitching on three days’ rest. “But it’s all mental. All I did was come out today and throw the ball like I’ve always done.”

Freshman Michael Mediavilla recorded three strikeouts in his outing, while Jesse Lepore pitched a clean ninth inning. The Hurricanes pitching staff combined for 14 strikeouts and zero walks on a night where Stetson struggled to get anything going offensively.

Miami returns to Alex Rodriguez Park at Mark Light Field Friday for its ACC home opener against NC State. First pitch for the game, slated for broadcast on 560 WQAM, is set for 7 p.m.