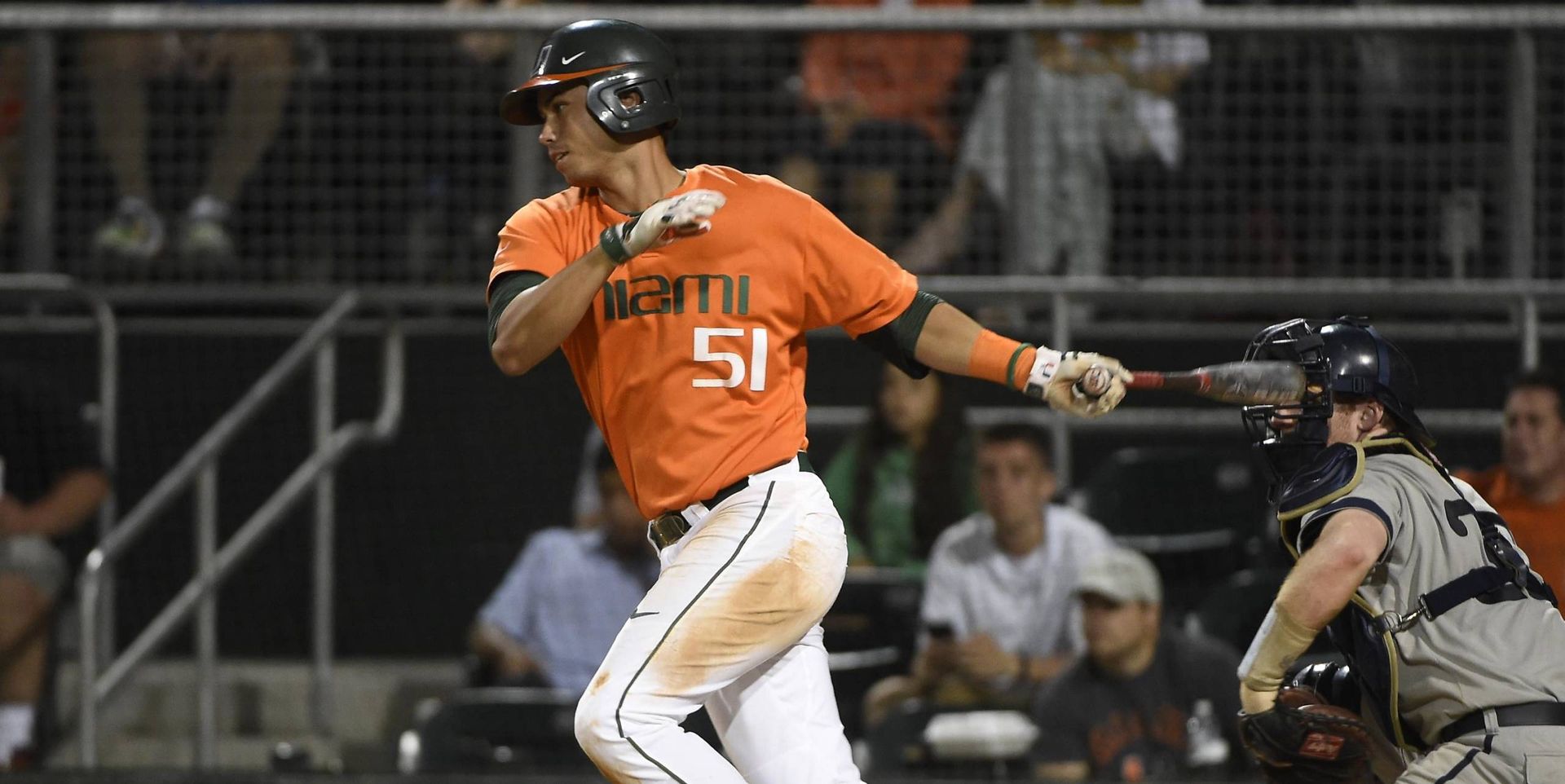 No. 11 Baseball Evens Series with 9-5 Victory

LOUISVILLE, Ky. — No. 11 Miami shook off a disappointing loss in the first leg of its doubleheader and captured a 9-5 win in game two, evening its series with No. 17 Louisville at Jim Patterson Stadium.

The Hurricanes (10-5, 1-1 ACC) jumped out to a 1-0 lead in the first inning, tacked on five runs in the fourth, and held on despite another comeback effort from Louisville to set up a rubber match Sunday.

Sophomore All-American closer Bryan Garcia pitched the final two innings and earned his fourth save of the season in the victory.

Miami led 6-3 in game one, but Louisville’s six-run seventh inning gave the hosts a lead they wouldn’t relinquish. Miami again led in game two – this one by an 8-0 margin – and, despite a four-run sixth inning from Louisville, held tight for its first ACC win.

Shortly after tagging Louisville ace Kyle Funkhouser for a career-high five earned runs in game one, Miami jumped out to a 1-0 lead in the first inning off Louisville righthander Anthony Kidston.

Freshman Carl Chester opened the game with a walk, and two batters later, junior Zack Collins crushed a double to the left-center gap that plated the speedy Chester and opened the game’s scoring.

Four of Miami’s five runs in the fourth inning came with two outs. After an RBI groundout made it 2-0 in favor of Miami. the Hurricanes reeled off five consecutive two-out hits – singles from Garrett Kennedy, Sebastian Diaz, Brandon Lopez, Chester and a two-RBI double from Ricky Eusebio – to go ahead 6-0.

Kidston (1-1) was charged with a career-high six runs, lasting just 4.0+ innings in the loss.

Miami tacked on two more insurance in the fifth on a two-RBI double from Lopez off Kade McClure. Those runs would prove crucial, as Louisville came storming back with five runs over the next two innings.

Junior righthander Enrique Sosa did well through his first few frames, allowing just a third-inning single while keeping the Cardinals off the scoreboard until the fifth when the hosts struck for a run on a Miami error.

But Louisville (9-5, 1-1 ACC) got to the righthander in the sixth, when the first two Cardianls batters reached on an error and a single. Third baseman Zach Lucas then belted a three-run home run to leftfield, cutting Miami’s lead to 8-4 and chasing Sosa after 5.0+ innings of work.

An RBI double from Devin Hairston off Miami reliever Daniel Briggi made it 8-5 in the sixth.

Louisville loaded the bases off reliever Cooper Hammond in the seventh with just one out. But just as it looked like the Cardinals might cut deeper into Miami’s lead, Hammond induced a 4-6-3 double play to escape the inning unharmed.

Though Miami struggled in the middle innings, Garcia entered and shut down the Cardinals for the final two frames. Garcia retired all six batters he faced, including two strikeouts, to earn the save.

First pitch for Sunday’s finale versus No. 17 Louisville, slated for broadcast on ESPN3, is set for 1 p.m.