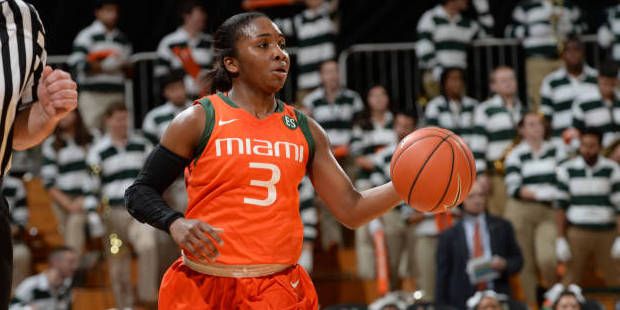 GREENSBORO, N.C. – The University of Miami remains the only ACC team to defeat Notre Dame in its two years in the conference, but the Hurricanes could not make it happen twice in one season.

Sophomore guard Jessica Thomas scored a career-high 24 points and redshirt senior forward Jassany Williams had a career-high 16, but that was not quite enough for the Hurricanes. Eighth-seeded Miami was defeated 77-61 by top-seeded and second-ranked Fighting Irish Friday afternoon in the quarterfinals of the ACC Tournament at the Greensboro Coliseum.

The first 12 minutes of the game were tight, with both teams playing superb defense. An impressive three-point play by Thomas sliced the Notre Dame lead to one, 20-19, with 8:08 on the clock.

The Fighting Irish then closed the half on a big run, outscoring Miami 17-6 over the final 7:45. Junior guard Jewell Loyd, the Blue Ribbon Panel ACC Player of the Year, posted nine points during the stretch after being held scoreless before it.

Thomas had eight points in the opening 20 minutes for the Hurricanes, who trailed Notre Dame 37-25 entering the locker room.

Although Notre Dame responded back, Miami (19-12, 8-8 ACC) continued to battle and twice got within five. The first time came on a jumper by senior forward Necole Sterling with 14:10 left and then after a basket by Loyd at the other end, Thomas had a layup of her own to bring Miami back within five.

The Hurricanes were unable to get closer than that though, as Notre Dame responded with a run of its own to get its advantage back up to double figures.

Miami kept up its intensity and effort down the stretch, even holding the Fighting Irish without a point for over five minutes, but Notre Dame was able to hold strong for a 77-61 win.

In addition to their career highs in points, Thomas and Williams both set new bests in made field goals. Thomas shot 9-of-14 (64.3 percent) in a career-high 36 minutes, while Williams went 7-of-14 (50 percent).

“I think that they were aggressive. They were confident when they caught the ball,” Meier said. “Jessica was making really quick reads and quick decisions and so was Jazz. I thought that was great. I thought that was wonderful that our team didn’t panic because they were taking [Adrienne] Motley out of the game. We just went to our other reads and that’s where this team has really grown.”

Loyd paced Notre Dame with 16 points, but Miami limited her to 5-of-14 (35.7 percent) shooting from the field. Freshman forward Brianna Turner, the Blue Ribbon Panel ACC Freshman of the Year, notched a double-double with 13 points and 10 rebounds.

In Miami’s two games this season against Notre Dame, the top-ranked team in the RPI, Miami was outscored by just a single point.