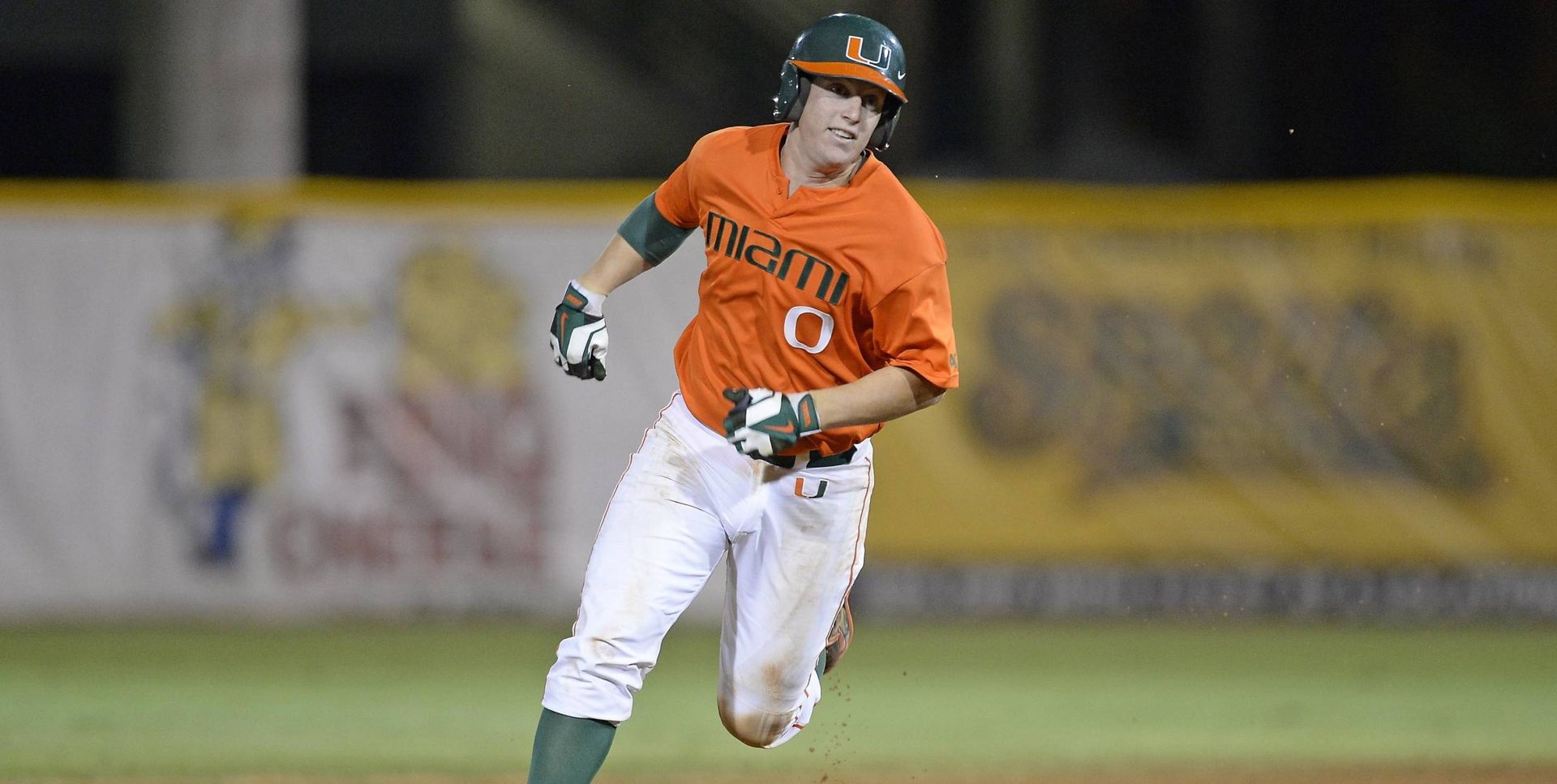 Collins Leads No. 11 Baseball to 7-3 Victory

The Hurricanes (9-4), who dropped Sunday’s finale to visiting Wright State and fell in an exhbition with the Marlins Tuesday, delivered an impressive rebound against the reigning Atlantic Sun Regular Season Champions. Miami plated runs in each of the first three innings, and closed it out with four strong innings from the bullpen – including the third save of the season from closer Bryan Garcia.

Miami ended its homestand with a 4-1 mark and improved its home record to 8-1 this season.

Key to Miami’s attack was Collins, who entered the night mired in an 1-for-18 slump (.059). The reigning ACC Freshman of the Year busted out in a big way, connecting on his second home run of the season and finishing the night with two hits, two walks and two runs scored.

“It felt good tonight, going 2-for-3,” Collins said. “I really felt good at the plate.”

“Those Marlins really got me back into it.”

In addition to his towering first-inning solo blast, Collins added a triple in the third and a pair of walks in his final two at bats. He would score on a RBI groundout from Willie Abreu in the third, and was named by head coach Jim Morris as Miami’s “player of the game.”

“I felt like that was a game where I could really work on my stuff without affecting anything,” Collins said of Tuesday’s exhibition. “I worked on a lot of stuff yesterday, and I felt good today.”

The home run, a monstrous shot that soared well past the wall in right-center, came on the first pitch he saw from FGCU starter Sterling Koerner (2-2).

“Taking batting practice today, the wind was blowing to left-center. When I hit the ball, I knew it was going to go,” Collins said of his home run swing.

Miami received an efficient outing from sophomore lefthander Danny Garcia (2-0), who allowed nine hits but just two runs. Garcia worked his way out of danger for most of the night, including a bases-loaded jam in the fourth. Garcia allowed three singles in the frame, but struck out Colton Bottomley to escape any damage.

Garcia was struck in the arm by a fifth-inning single from Adam Eggnatz, but after being checked out by trainers on the mound, remained in the game. Collins continued his impressive game with a perfect throw on an attempted steal by Eggnatz to end the inning and Garcia’s night after five solid frames.

Righthander Jack English was stellar in relief for the Eagles, allowing just one hit with four strikeouts in four innings of relief to keep the visitors in the game. After Koerner’s departure, Miami did not strike again until the bottom of the eighth when the hosts added runs on two Eagles miscues – a wild pitch and a passed ball.

Miami’s bullpen was up to the challenge, however, as freshman Michael Mediavilla and sophomore Cooper Hammond combined to pitch 2.2 scoreless innings, giving way to the team’s All-American closer Garcia.

Garcia entered with two outs in the eighth and retired pinch hitter Blake Berger on a strikeout. He allowed a run on a wild pitch in the ninth, but needed just 21 pitches for his 1.1-inning stint.

“I think every game is just as important as the other. But this was important, knowing we’re going to Louisville for a big ACC weekend. We’re off to a good start,” Collins said.

First pitch for Friday’s opener against No. 17 Louisville, slated for broadcast on ESPN3, is set for 3 p.m.