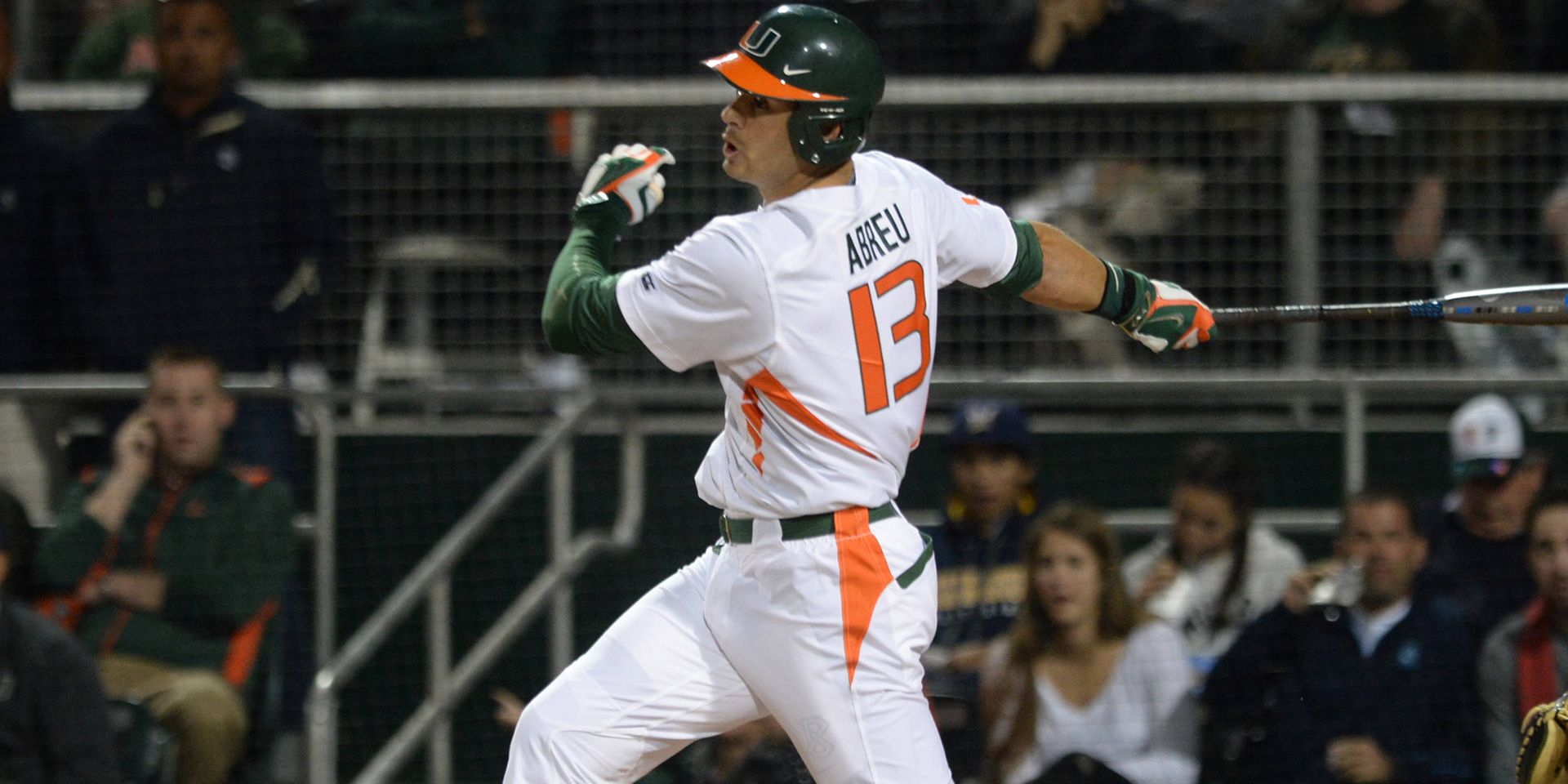 CORAL GABLES, Fla. – After a walk-off home run from Garrett Kennedy secured a come-from-behind win Friday night, No. 11 Miami entered the ninth inning Saturday in need of another heroic performance to avoid a Sunday rubber match.

Despite an 0-for-4 start at the plate, Willie Abreu ensured a second straight night of on-field celebration for his teammates.

The sophomore outfielder battled Raiders closer Andrew Elliot through a lengthy at batt, and on Elliott’s 10th and final pitch of the night, smacked the winning single to left to give Miami a 4-3 win and the series victory.

“It was a good fight. Our team never gives up,” Abreu said. “I”m real proud of everybody…we did what we had to do to be able to win that ballgame.”

Abreu said he had confidence facing Elliott (0-2), a hard-throwing righthander who gave up the home run to Kennedy the night before.

“Talking with our hitting coach Gino [DiMare], being able to stay relaxed up there at the plate,” Abreu said about his mindset. “The coaches have trust in me, and I was able to come through.”

Abreu’s single capped a spirited ninth inning for the Hurricanes, who entered trailing 3-2 but loaded the bases on two singles and a walk without recording an out.

Ricky Eusebio, one of three players to record three hits Saturday, opened the inning with a single and tied the game 3-3 by scoring on a wild pitch from Elliott during Abreu’s at bat.

“We struggled in the beginning, but we never quit,” Abreu said. “We came back and were able to pull it off.”

Though Saturday’s outcome was hanging in the balance, Miami (8-3) received another strong effort from junior righthander Enrique Sosa.

“I thought Sosa threw well,” head coach Jim Morris said. “He pitched well enough to win. We just left too many runners on base.”

For the second consecutive game, it was Wright State (4-4) that jumped out to an early lead. The Raiders tagged Sosa for two runs in the first inning, as an RBI single from Andrew McCafferty and a throwing error charged to Miami second baseman Edgar Michelangeli put the Hurricanes in an early hole.

The Raiders loaded the bases with just one out in the fourth, but Sosa limited the visitors to another sacrifice fly – this one by Brad Macciocchi – and got a popout from leadoff hitter Mark Fowler to hold the deficit at 3-0.

The Hurricanes looked poise to cut into their deficit in the fifth, when back-to-back singles from freshman Chester and Eusebio gave Miami a runner in scoring position with no outs. After Zack Collins struck out, a single from Iskenderian loaded the bases. But Scholtens escaped any damage when Abreu hit into an inning-ending 4-6-3 double play.

Chester set a career high with three hits on the night, including two infield hits and an RBI single.

“It was a good day at the plate,” Chester said. “I was trying to put the ball in play and let my feet do the rest of it.”

Miami found little success early on against ace Jesse Scholtens, who allowed just one unearned run in 5.1 innings. Scholtens departed with two outs in the sixth, having scattered eight hits. He walked three batters and struck out four in a 110-pitch outing.

“He’s got a good arm. He’s really tough to run on…he shuts the game down, even if you get on base, he’s a guy that’s very hard to run on,” Morris said of Scholtens.

Righthanded Jack Van Horn entered in relief of Scholtens, and an error from John Brodner put runners on the corners. Chester lifted an RBI single into centerfield to plate Thompson (walk) and cut Wright State’s lead to 3-1.

Miami inched closer in the eighth, as a leadoff walk from Thompson and a double from Friday night hero Garrett Kennedy put two runners in scoring position. An RBI groundout from Edgar Michelangeli cut the lead to one run at 3-2 and gave Miami a chance to win the game late.

“I think it’s the definition of The U,” Abreu said about his team’s mentality. “We never stop. We always fight until the end. Until the game’s over, we have a chance. We know that not every day we’re going to come with our best baseball, but at the end of the day, we can fight.”

The Hurricanes return to Mark Light Field Friday Sunday for the series finale with Wright State. First pitch for the game, slated for broadcast on 560 WQAM, is set for 1 p.m.