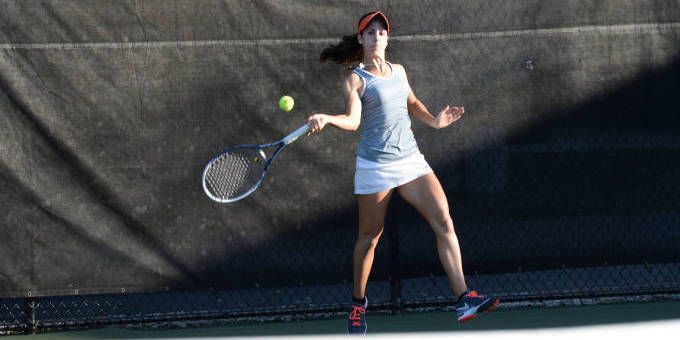 The No. 20 Hurricanes defeated the Demon Deacons 7-0 and lost just one set the entire match.

“We’re excited, we’re excited for March. March is a tough month for us and to start [ACC play] the way we did today was great,” Miami head coach Paige Yaroshuk-Tews said. “We rested a couple girls, so it was nice to not only start of ACC play, but start off ACC play with some girls that typically don’t play, and they came out and they just played with incredible energy and did a great job . . . Big day for everybody and I thought they played well, I thought they played clean.”

Miami (5-2, 1-0 ACC) was outstanding in doubles play to open the day, taking command of all three matches early and not looking back. The nation’s No. 17 ranked pair, senior Monique Albuquerque and junior Clementina Riobueno, defeated Wake Forest’s Andrea Retolaza and Xue Zhang, 8-3, for the first win.

It was then a race to see who could clinch the doubles point between the seventh-ranked duo of senior Lina Lileikite and junior Stephanie Wagner or the freshman tandem of Sinead Lohan and Wendy Zhang. It would be the latter pair who would give Miami the doubles win over Wake Forest (9-4, 0-2 ACC), but just barely.

When Lohan and Zhang wrapped up their 8-3 victory over Samantha Asch and Luisa Fernandez to clinch the point for the Hurricanes, Lileikite and Wagner had match point just one court over. Their match was left unfinished with the Miami duo on top 7-3.

“One [Albuquerque/Riobueno] is playing so much better. They’re slowly getting back to the team that they were last year and so I’m happy to see that,” Yaroshuk-Tews said of the doubles performance. “Two [Lileikite/Wagner] played really solid, three had incredible energy. We’ve been talking to Wendy a lot about bringing the energy and she had that. Sinead played a solid match as well, so I think three probably played closer to the way we’re looking for them to play than I’ve seen in a while, but I was happy with one, two and three in doubles today.”

In singles competition, the Hurricanes were just as impressive as they were in doubles, winning all six matches. Lileikite, ranked No. 84, got the first victory for the Hurricanes, quickly taking down Andrea Retolaza, 6-1, 6-0, in a superb showing on court three.

Riobueno was next, as the ITA’s No. 62-ranked singles player defeated Xue Zhang, 6-2, 6-3. Then it was between Albuquerque and freshman Yolimar Ogando on who would clinch the victory for Miami.

It turned out to be Ogando, who picked up the first dual match win of her career, taking down Kasey Gardiner 6-3, 6-1. The Carolina, Puerto Rico native trailed 2-0 in the first set and then won 12 of the final 14 games.

Albuquerque’s match finished soon after and she picked up a resounding 6-0, 6-2 win over Wake Forest’s Luisa Fernandez on court five.

Freshman Silvia Fuentes then came through with a superb comeback victory in her match. After trailing 3-0 in the first set, she stormed back for a 6-3, 6-4 win against Samantha Asch.

“Fuentes came away with a win against a kid who played number two last year and beat us actually at Wake,” Yaroshuk-Tews said, later adding, “She came out and I think she thought she had to play a little bigger than she needed to play. She just found out like five minutes before the match that she was going to be playing four, so I think she felt the need to play a little bigger than was necessary, so when she settled in and realized she just needed to play her game, she was fine.”

Wagner’s match was the last one to finish and she had most of her teammates and coaches lined up on the court next to her cheering her on at the end. Facing No. 100 Kimmy Guerin, Wagner lost the first set, but then took control of the match and won 3-6, 6-3, 6-3.

The Hurricanes will have a quick turnaround for the next match, as they face No. 14 Clemson Sunday, March 1 at 4:00 p.m. the Neil Schiff Tennis Center.