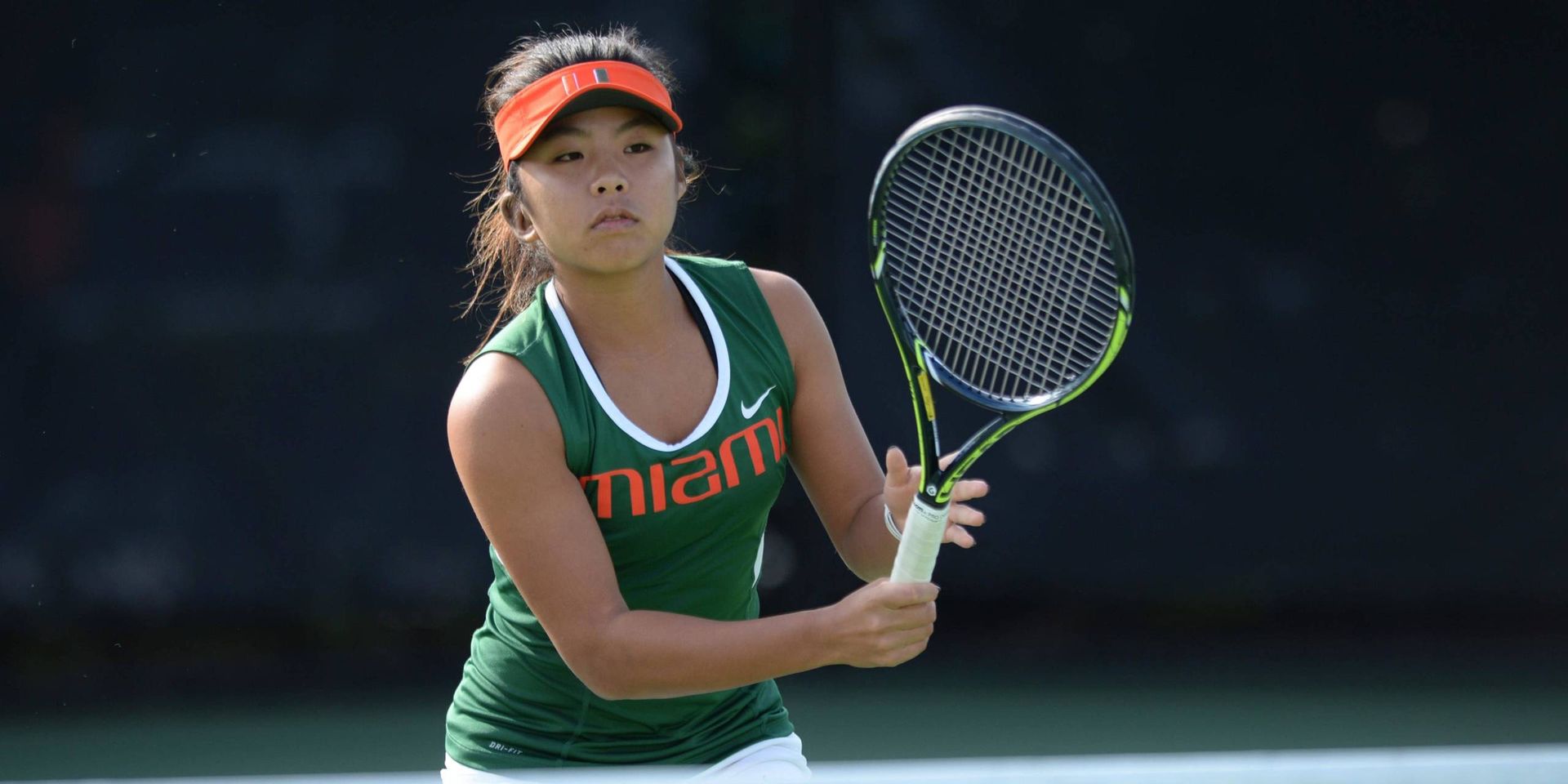 CORAL GABLES, Fla. –The University of Miami women’s tennis team began day two of the Miami Spring Invite with a strong performance in doubles in doubles action at the Neil Schiff Tennis Center.

The Hurricanes played three doubles matches against No. 11 Vanderbilt and one against No. 44 Utah, coming away with three victories.

“We played good doubles, we played really well at two, three and four,” Miami head coach Paige Yaroshuk-Tews said. “One was a little defensive. Number one for Vanderbilt [Antal/Casares] is a good team. We didn’t play bad tennis, it’s just when you’re only playing a set of tennis, no ad, if you’re defensive high in doubles you’re probably not going to come out on top.”

The No. 37 all-freshmen pairing of Sinead Lohan and Wendy Zhang eased their way to a 6-3 victory over Vanderbilt’s Georgina Sellyn and Sydney Campbell. Miami’s other rookie duo, Yolimar Ogando and Silvia Fuentes, cruised to a 6-1 win, beating Utah’s Victoria Robertson and Alexia Petrovic.

The match between Monique Albuquerque and Clementina Riobueno and Vanderbilt’s Antal and Casares was a back-and-forth affair, as the teams exchanged leads more than once. Abuquerque and Riobueno, ranked No. 15, were able to force a tiebreaker, but fell 7-6.

In singles, No. 88 Clementina Riobueno took care of Lana Groenvynck of Texas in straight sets, 6-0, 6-1. No. 94 Lina Lileikite followed suit with her own straight set win over Texas’ Pippa Horn, 6-3, 6-4.

On court two, freshman Sinead Lohan, ranked No. 39, defeated fellow freshman Ryann Foster, 6-3, 7-6. In the second set, Lohan trailed the Longhrn 4-1 and rallied back and take a 6-5 lead. Foster forced a tiebreaker and raced to a 6-2 lead. Lohan again answered with her own rally, with six consecutive points to win the breaker, 8-6, and the match.

“I can’t remember the last time I’ve seen two freshmen playing that type of tennis this early in the season,” Yaroshuk-Tews said of Lohan’s match against Foster. “Lohan really unveiled a side of her game that I hadn’t seen since she’s been here. She really dug her heels in [during] the second set and she didn’t go away.”

Court one featured two ranked players, in Miami’s Stephane Wagner, ranked seventh in the country, and Texas’ No. 84 Breaunna Addison. After Addison won the first set 6-2, Wagner fell behind in the second set 4-1, but the junior then took over to grab a 5-4 lead.  Addison tied the set at five, but Wagner showed her resiliency again, winning the set 7-5.

In the third and decisive set, Addison jumped out to a 5-1 lead and Wagner’s final attempt to complete the comeback fell just short, losing the third set 6-2.

Yolimar Ogando’s match against Texas’ Lucia Kovarcikova was left unfinished after an injury to the Longhorn.

The Hurricanes will return to the court Sunday morning for the final day of the Miami Spring Invite and Yaroshuk-Tews sees the matches as an opportunity to improve.

“Tomorrow we just need to start taking the balls that are coming through the court a little bit more,” Yaroshuk-Tews said. “We’re letting too many balls come through the middle of the court. We were hitting too many groundstrokes, we need to hit more volleys tomorrow.”

Play will begin at 8:00 a.m. Sunday with doubles action and Miami will be facing off against No. 44 Utah. The Hurricanes will then meet No. 11 Vanderbilt for singles play. All of Miami’s matches Saturday are set to take place on courts one through four.