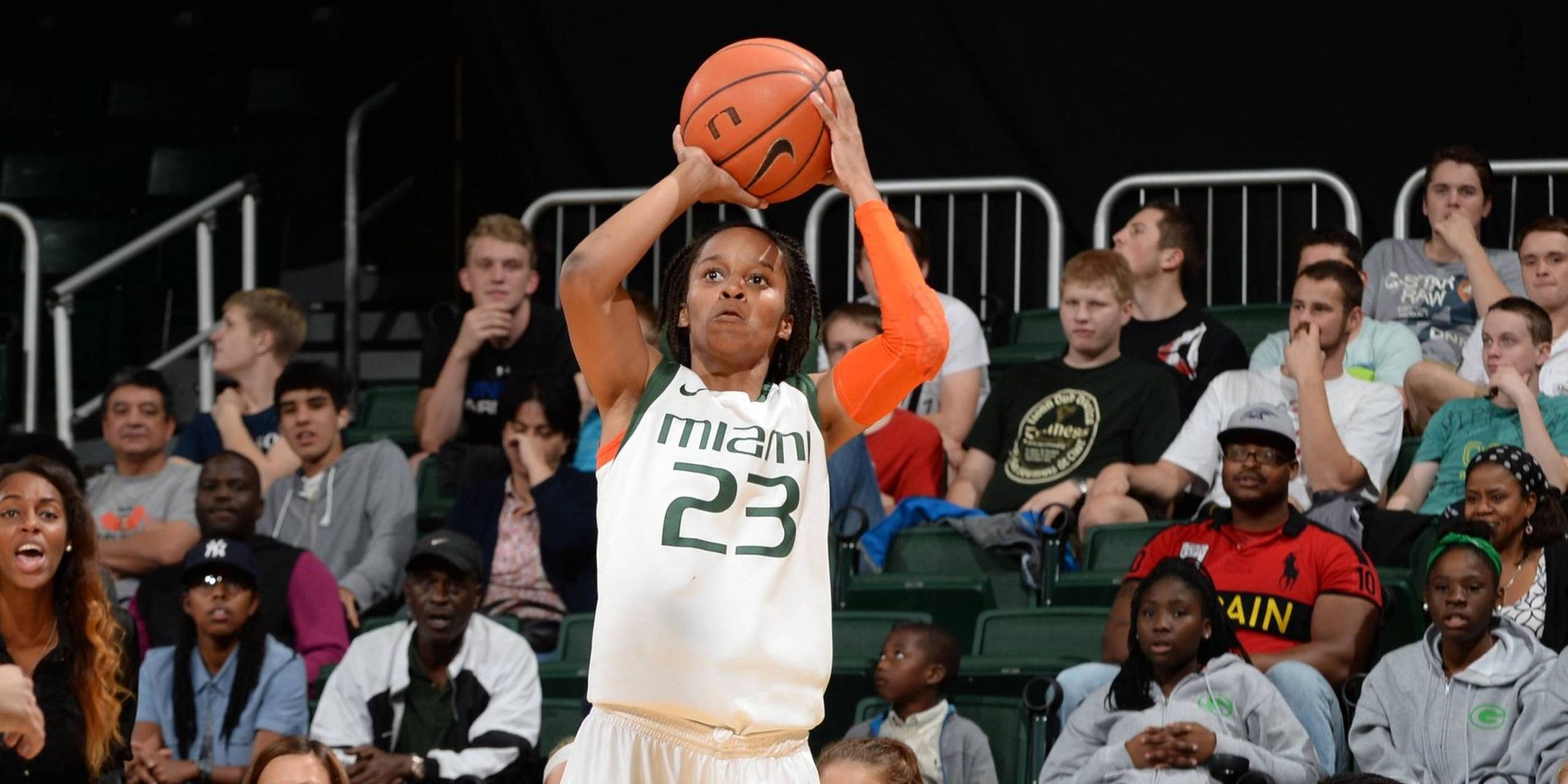 NEW ORLEANS – Although it was in the Big Easy, the University of Miami’s game against UCLA Thursday night was certainly a tough test—and the Hurricanes passed.

Facing the preseason top 25 ranked Bruins, Miami (8-2) used superb first half shooting and its usual quality defense to knock off UCLA 74-67 in the opener of the Tulane/DoubleTree Classic at Devlin Fieldhouse.

“Well, we’re trying to prove ourselves a little bit and I’m frankly trying to figure out our identity,” Miami head coach Katie Meier said. “Obviously we’re really buying in on the defensive end. [UCLA] is a high scoring, high volume team and that first half defensive effort was beautiful.”

After a strong start to the game by the Hurricanes to take a 10-point lead, UCLA (3-5) went on a 9-2 run to close to within three, 28-25, with 3:50 left before the break. Miami then immediately answered and did so in a big way to fully swing the momentum back its way.

Sophomore guard Adrienne Motley hit a jumper, then redshirt freshman guard Nigia Greene knocked down a three-pointer, got a steal and made a layup. Just like that, a 7-0 run in under 45 seconds pushed the advantage back to 10.

Redshirt junior guard Michelle Woods, who had already hit a pair of three-pointers in the first half, then made two free throws to give Miami a lead of a dozen. The teams then exchanged points the rest of the half, including a jump shot at the buzzer by Motley.

The sophomore’s 11 points on 5-of-7 shooting at the intermission helped Miami to a 39-27 lead at the break. Woods and Greene each had eight entering the locker room.

“I thought we mixed up our defenses a lot and the kids were communicating really well,” Meier said of the way the team played defensively in the first 20 minutes.

It took the Hurricanes just eight seconds to extend their lead when play resumed, as senior guard Suriya McGuire quickly found Motley who hit a three-pointer to put the Hurricanes up by 15. The lead would grow to as much as 17.

A third Michelle Woods three-pointer put Miami up by 15 with 12:23 to play, but this time, UCLA countered with an impressive surge. The Bruins went on a 15-3 run to slice Miami’s advantage to three, 53-50, with 8:11 remaining.

After seeing its large lead chopped down and the contest turned into a one possession game, Miami was able to gather itself and close the game strong.

UCLA would get no closer than three and Miami would actually push its advantage back up to double digits, 63-53, on a pair of Michelle Woods free throws with 3:27 on the clock.

“Took a timeout and said ‘You got your legs.’ I mean, we lifted like five times for this moment,” Meier said of the team’s response to UCLA’s run. “While they were in finals we didn’t do a ton of basketball, but I said, ‘You have your legs , they’re coming back [to you], you’re fine. Do what you do, get in your stance, just right back to the fundamentals.’”

Adrienne Motley led all scorers with a season-high 23 points on 7-of-12 shooting. It was the fifth time this season that she has scored over 20 in a game.

Michelle Woods set a season high with 17 points and went 3-of-5 from three-point range as well as 6-of-6 at the line.

“That was the best game Michelle Woods has played this year by far,” Meier said. “That’s the Chelley that I know and she’s been out a year [after her injury]. She had a great week of practice and I even said in a pregame speech to the team that I thought we had a couple players that really had improved their game and were ready to go. And I was specifically talking about Laura [Quevedo], Chelley and Nigia. I thought they had a great week of practice and they really played very, very well.”

Suriya McGuire finished with 13 points and shot 7-of-10 from the line, while Nigia Greene had eight points. Redshirt senior Jassany Williams pulled down nine rebounds, tying for the game high.

Miami will be back in action tomorrow, as the Hurricanes face host school Tulane in its second game of the Tulane/DoubleTree Classic. The game against the Green Wave (7-1) is set for 8:00 p.m. ET from the Devlin Fieldhouse.