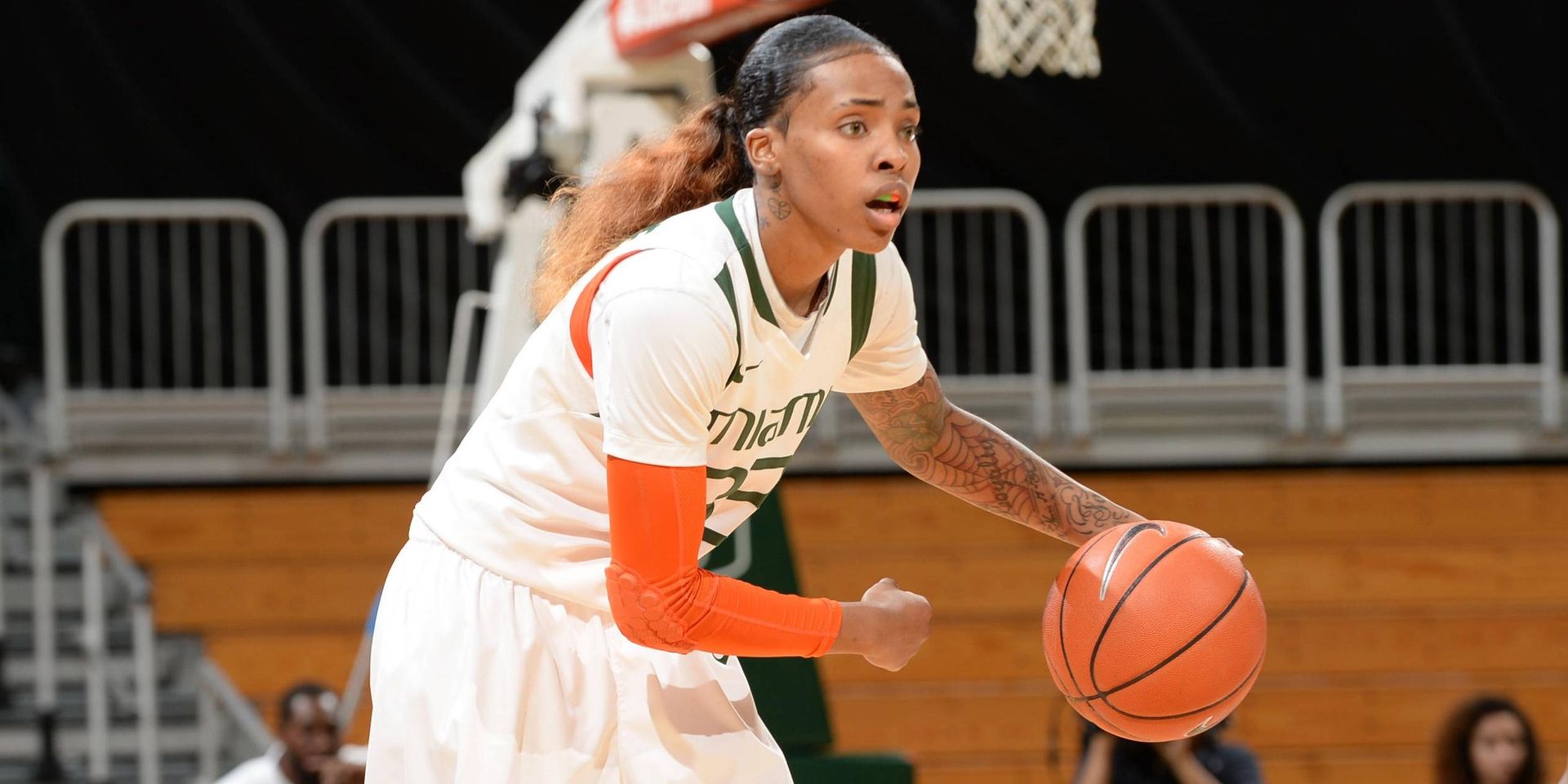 CORAL GABLES, Fla. – Suriya McGuire hit a three-pointer 15 seconds into the game and then hit another two minutes and 16 seconds later to put the University of Miami up 11-0 on Wisconsin Thursday night at the BUC.

It was the third straight time that the Hurricanes scored at least the first eight points of the game and Miami (5-2) used the early burst to take down the Badgers 66-54 in the ACC/Big Ten Challenge. It was also the third game in a row in which Miami never trailed.

“We moved Ray into the starting lineup. We’ve been platooning, so the starting lineup doesn’t really matter—it’s just been two even teams,” UM head coach Katie Meier said of the fast start. “But tonight I knew we needed Ray. I knew she would have a big game. I didn’t want to cut any of her minutes down. That was an incredible impact to start the game.”

McGuire, a senior guard from Minneapolis, Minn. echoed the comments of her coach about the way the team opened the game.

“I agree with Coach [Meier], how came out in the beginning of the first half very aggressive,” McGuire said. “We shared the ball, we prepped all week for the game and that was exactly the game plan. We just have to be able to execute—like Coach said, it varies. No one has an official starting spot. We have to stay consistent.”

Despite having just one more possession in the first half than Wisconsin did, Miami attempted 22 more shots due to its impressive defense. Ten of the 15 turnovers that Miami forced came via steals, including three by McGuire, a senior guard.

The second half was much of the same for the Hurricanes, as their stellar defensive paired with the scoring prowess of McGuire and Motley was too much for the Badgers to overcome.

Miami forced another 13 turnovers in the second half for 11more points, while turning it over just eight times after the break. In the 40 minutes of play, Miami had 18 steals.

For the game, Wisconsin had 28 turnovers and 35 field goal attempts. The Hurricanes finished with 72 shots from the field, more than doubling the Badgers’ total.

McGuire added six points in the second half to end with 19 on the night, just four shy of her career best mark. She also had five steals, matching a career high.

“It gives me a lot of confidence, but I’ve never been a player to worry about my points,” McGuire said of her scoring display. “I just want to make an impact in the game and make sure we get the win, regardless if I have two points, 19 points, 11 points. Whatever it takes to get the win.”

Motley had 11 points after the break and posted 21 for the game, matching her season high. Three times in the contest, Motley grabbed an offensive rebound, went up with it and turned it into two points. The Newport News, Va. native had a season-high seven rebounds, four at the offensive end. Motley also had a season-high six assists.

“I just told the team, it was a night where we had only two players whose offense was coming through –that was Ray and Motley,” Meier said. “The rest of the team, really, not bad looks but they weren’t going in. On those nights, you better offensive rebound and you better get some steals, and that’s what we did. I didn’t feel like we converted off our steals like we normally do, but in huge moments, when Wisconsin had a little bit of life, it was either an offensive rebound or a press or steal situation that kind of broke their backs.”

Junior guard Nicole Bauman and senior guard/forward Jacki Gulczynski both had 18 points for the Badgers. Wisconsin’s leading scorer on the season, Michala Johnson, got injured in the first half and played a total of just nine minutes.

Miami will have a quick turnaround for its next game, as the Hurricanes welcome Jacksonville to the BankUnited Center in just two days. Miami will face the Dolphins Saturday, Dec. 6 at 4:00 p.m. as a part of a doubleheader with the men’s basketball team, who plays UW-Green Bay at 2:00 p.m.