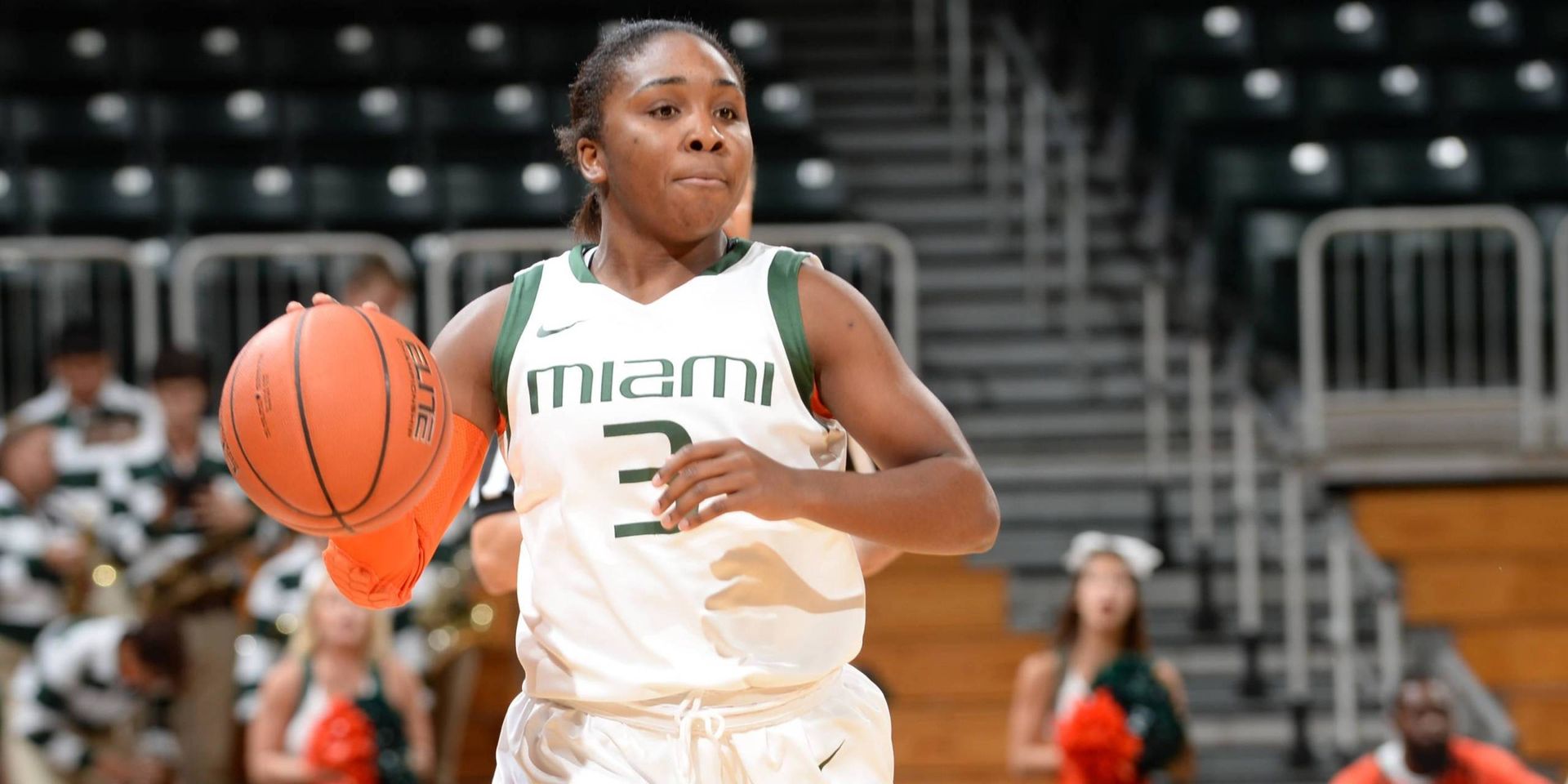 CORAL GABLES, Fla. – For the first eight and a half minutes Friday night, it looked like North Florida might be able to hang with the Hurricanes at the BankUnited Center. Then, Jessica Thomas took over.

The sophomore guard hit a pair of three-pointers and dished out an assist for another long range bucket by redshirt freshman Nigia Greene. Other Hurricanes chipped in with buckets as well and just like that it was a 14-4 run for Miami to take a 27-12 lead with 7:49 left in the half. From there, UM head coach Katie Meier’s team would would continue to dominate play and rolled to an 81-53 win.

It was the second straight game where Thomas was a catalyst for a Hurricanes run, as the Gainesville, Fla. native continues to assert herself as a force in the backcourt with her increased role this season.

“That’s her attitude, she’s just tough, she’s such a gritty kid and she’s such a competitor,” Meier said. “Last year she would kind of compete, not in a selfish way, but she would compete for herself to let everyone know how good she is. Now she’s making sure Miami is competing and she’s making great plays with the ball. I thought she had a phenomenal game tonight.”

Miami (2-1) did not trail the entire game and the only time it was tied once points were on the board was at 2-2.

This is the third consecutive season that Miami had defeated North Florida (1-2) and the combined margin of victory has been a decisive 237-116.

“I thought we shared the ball, we had a lot of hockey assists tonight, the one more passes,” Meier said. “Necole Sterling missed a couple shots and she became a facilitator and set some people up. And Jessica was hot, but she still was setting people up and we needed that. We needed that, we practiced that a lot this week and I’m just glad what we practiced showed up tonight.”

Adrienne Motley was outstanding in the second half, helping extend Miami’s lead by scoring 15 points after the break. The sophomore guard finished with 21 to lead all scorers and shot 8-of-10 from the field, including making both of her three-pointers.

“It was so efficient,” Meier said of Motley’s second half performance. “Mot’s just quiet because it’s just an easy little shot and she makes it and it’s one of the lowest percentage shots in basketball, that little pull-up, but with Motley it’s her high percentage shot. I loved the up the sideline three that she hit though, that was my favorite play.”

As a whole, Miami used a balanced offensive attack to take down the Ospreys, as all 11 players who saw action got in the scoring column and seven finished with five-plus points.

In addition to Motley, Jessica Thomas and freshman guard Laura Quevedo also scored in double digits. Thomas had 11 points and a season-high five assists, while Quevedo had an early breakout game as a Hurricane. The native of Madrid, Spain scored 15 points on 6-of-9 shooting, including 3-of-6 from beyond the arc.

“It was great, and I think she knows, sometimes freshmen, they worry about themselves until they wake up and realize that the team really needs them and we desperately need her and that position,” Meier said. “. . . She knew why we brought her here and she really showed up tonight.”

Senior guard Destinee Smith paced the Ospreys with 13 points, but the Hurricanes held her to 3-of-13 shooting. Senior forward/center Paulina Zaveckaite had 10 points for North Florida.

Miami’s next game will be against the Sun Devils of Arizona State Tuesday, Nov. 25 at 7:00 p.m. at the BankUnited Center.