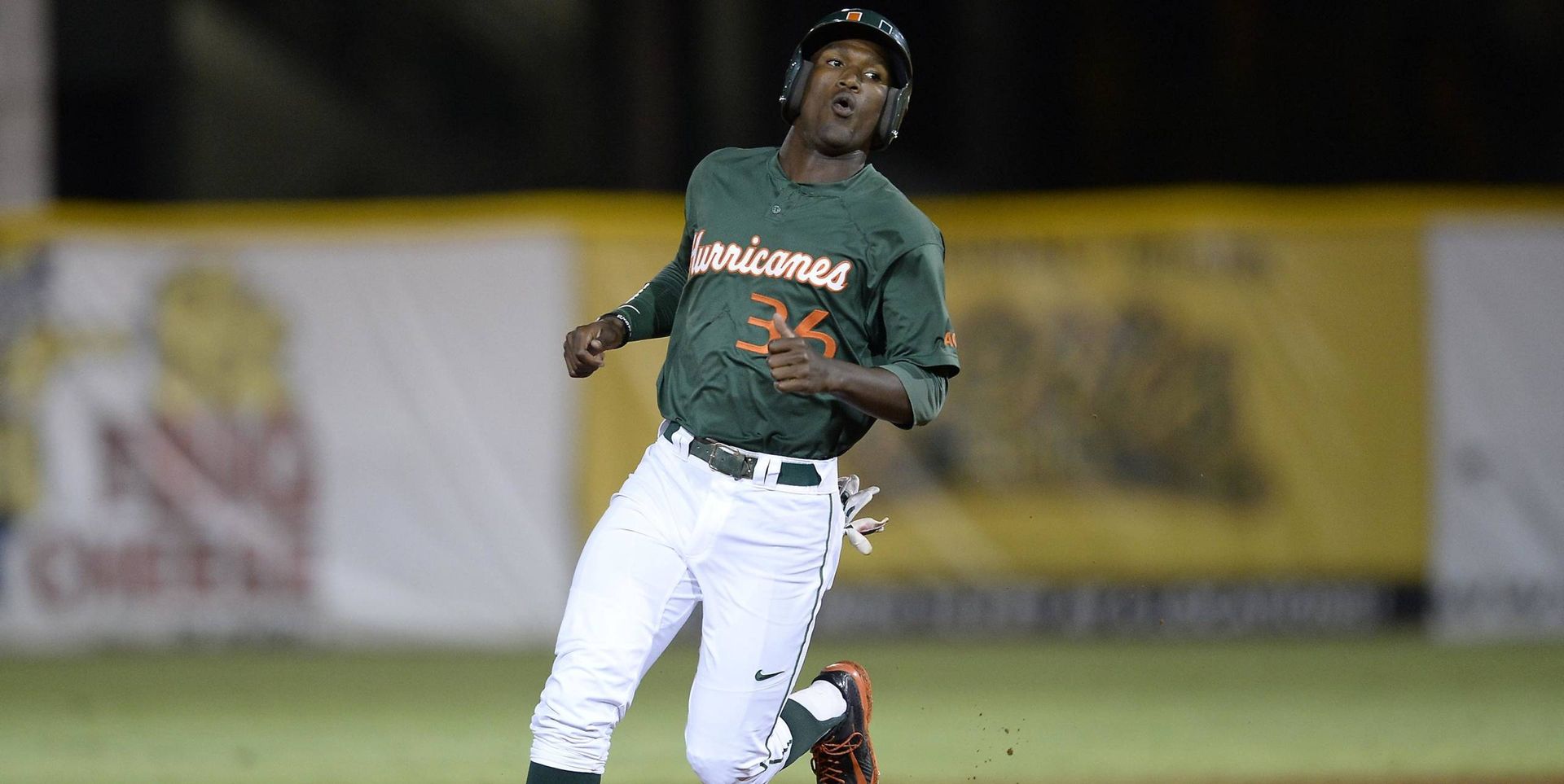 Baseball Falls in Matchup with Clemson 3-2

GREENSBORO, N.C. — Top-seeded Miami fell to fifth-seeded Clemson in disappointing fashion Thursday night, dropping its Pool A matchup 3-2 on a walk-off single from the Tigers in the bottom of the ninth inning.

Freshman closer Bryan Garcia (5-4) allowed two of the first three baserunners to reach in the ninth, and Clemson second baseman Steve Wilkerson came up with a single through the rightside to score the winning run from second. Miami fell to 0-2 at the ACC Championship, dropping just their fifth game in the last 32 tries.

“Our guys played hard,” head coach Jim Morris said. “We had some opportunities where we could have won the game with a basehit here or there. Bottom line, they got that big hit when they needed it. They were fighting hard…everyone was fighting hard in that game.”

It was Miami who struck first off Clemson first-team All-ACC selection Daniel Gossett, tagging the righthander for two runs in the top of the third inning.

Back-to-back singles from senior Alex Hernandez and freshman Jacob Heyward set up the scoring chance for the Hurricanes, who swept Clemson in the regular season series between the two teams in late April.

Senior Dale Carey’s attempted sacrifice bunt was fielded by Clemson third baseman Weston Wilson, but a miscommunication in the Tigers infield caused no covering player at first base. The play loaded the bases for the Hurricanes, and Zack Collins drove in the opening run when he was hit by a pitch from Gossett.

Miami (40-17) was not done yet, as a wild pitch from Gossett plated Heyward from third base to make it 2-0.

After suffering a hand injury during pregame warm-up, Miami lefthander Chris Diaz battled his way through 4.1 innings. Named the ACC Co-Pitcher of the Year earlier in the week, Diaz surrendered just five hits and one earned run on an RBI groundout from Jay Baum in the third.

“It was definitely one of my toughest outings all year,” Diaz said. “I couldn’t find a feel for my fastball. I was trying to make adjustments the whole game, but nothing seemed to work. My team battled, they kept us close, and unfortunately we came up short.”

Diaz was relieved in the fifth after allowing a single to Steve Wilkerson and hitting Garrett Boulware with a pitch. With two runners on base and just one out, freshman righthander Cooper Hammond induced a double play to end the inning and keep Miami’s lead at 2-1.

A solo home run from Clemson pinch hitter Jon McGibbon off Hammond in the sixth tied the game up 2-2.

After surrendering two runs in the third, Gossett shut Miami down for his final 5.1 innings of work. The righthander was relieved with one out in the ninth, and Miami managed to put runners on the corners with two outs.

“They played well. Gossett threw really well against us, just as he did the first time,” Morris said. “We felt like he was the best pitcher we faced all year coming into this game.”

Carey led off the action with a one-out single – his career-high fourth hit of the night – and took third base on an errant pick-off attempt. But groundouts from Tyler Palmer and Thompson ended the threat.

“Tyler had been doing a great job all year coming up clutch,” Carey said. “When I got to third base, I expected the same thing out of him – he put a good swing on the ball, but it chopped into the ground.”

Top-seeded Miami wraps up Pool play on Saturday with a matchup against fourth-seeded Duke. First pitch for the contest, slated for broadcast on RSN and ESPN3, is set for 11 a.m.