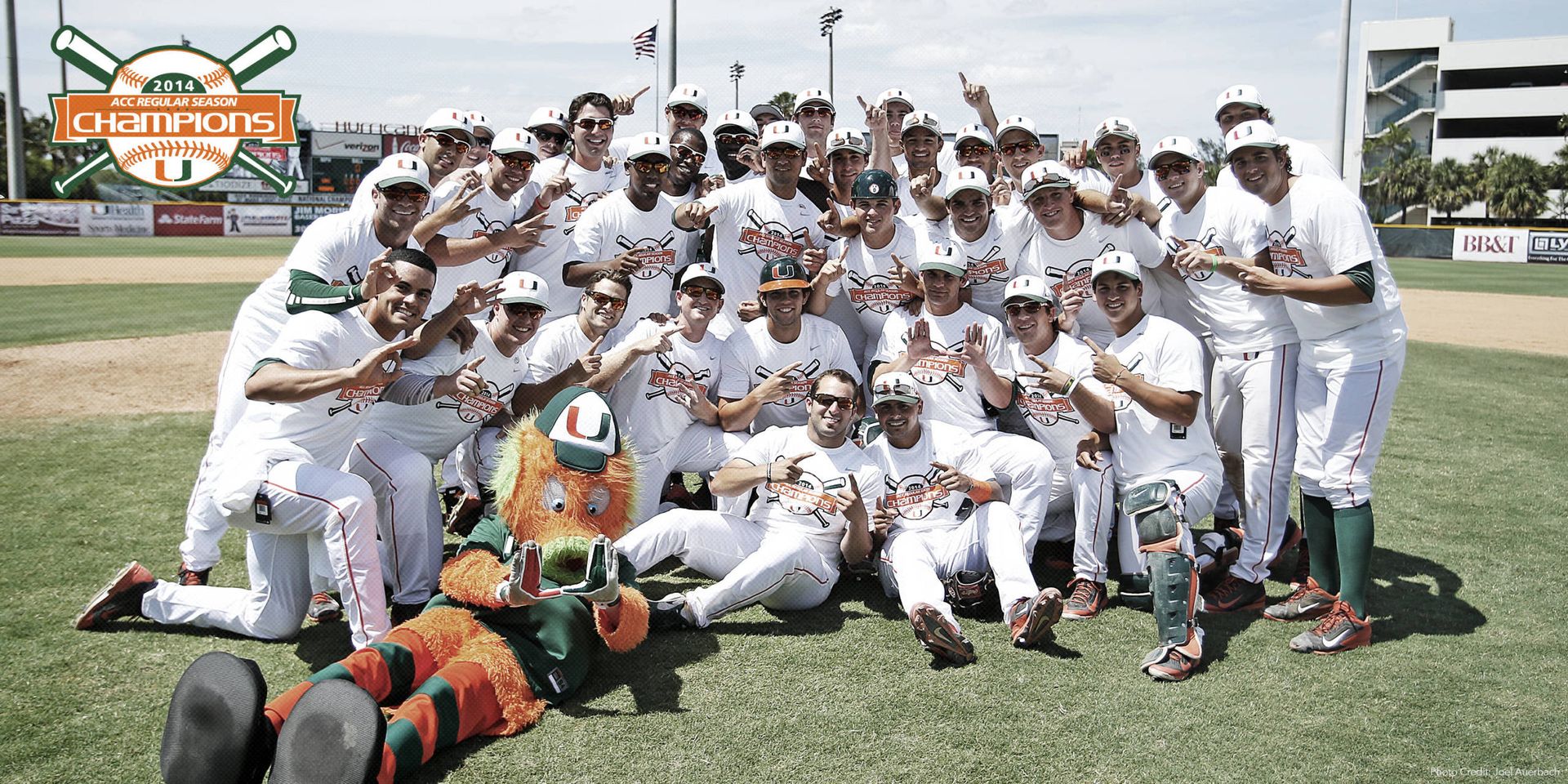 No. 4 Miami captured the second ACC Regular Season Championship in program history Saturday, earning a 2-0 victory over visiting North Carolina to clinch the No. 1 seed in next week’s ACC Tournament in Greensboro, N.C

But when asked about his team’s mentality after an understated postgame celebration on the field, Palmer was quick to diffuse any overexcitement.

“When we get [only] two wins in a weekend, we want the third. We have to stay hungry,” he said. “This is not the first time the program has won an ACC Regular Season Championship. There’s history in this program…we want to make it back to Omaha.”

After a 13-12 start through the team’s first 25 games, including a 5-4 mark in ACC play, Saturday’s championship-clinching victory and on-field celebration might have seemed like a pipedream for Palmer and his teammates.

Instead of folding, Miami went 27-3 over its final 30 contests – emerging victorious in its seven remaining ACC series and compiling a 19-2 record over those games – to finish the spring with its first 40-win regular season since 2008.

The hosts received six strong innings on the hill from veteran lefthander Bryan Radziewski (7-2), who kept North Carolina off the board and yielded just six hits.

“We kept going and never looked back,” Radziewski said about his team’s remarkable late-season run. “It’s a testament to all the hard work we put in, and all the freshmen who needed to get their feet wet.

“It’s a very good accomplishment,” head coach Jim Morris said. “Our guys have worked very hard – players, coaches, everybody. We stuck together as a team. We had a few injuries here and there, but the guys have always stuck together and taken up for each other.”

The Hurricanes (40-15, 24-6) struck first off North Carolina righthander Zac Gallen, plating a run in the bottom of the first inning to take an early 1-0 lead. A triple from Palmer – whose late-game heroics gave Miami a walk-off game one win in 16 innings – set up a scoring chance for sophomore first baseman David Thompson.

Making his third consecutive start after missing 32 games due to injury, Thompson cracked a two-out single past the glove of Tar Heels second baseman Wood Myers to plate Palmer for a 1-0 lead.

The stretch continued an impressive weekend for Palmer, who was one of Saturday’s heroes.

“Last night I was kind of speechless – people were asking me, ‘How did it feel to hit a walk-off on my Senior Night?’ It’s something that you can’t even picture,” he said. “It’s a dream come true. Everything we’ve accomplished this year, it’s made my senior year worthwhile.”

Miami added another run in the fourth, and once again Thompson was the catalyst. The sophomore connected on a leadoff single, advanced to second on a single from Brandon Lopez, and took third on a sacrifice bunt.

On a shallow sacrifice fly from Johnny Ruiz, Thompson slid in towards UNC catcher Korey Dunbar. Though an impressive throw from centerfielder Skye Bolt reached home in time to apply the tag, a hard slide from Thompson jarred the ball out of Dunbar’s glove to make the score 2-0.

“I thought I was going to be out,” Thompson said. “But like they teach us here, ‘slide late and slide hard.” That’s what I did. I put my cleat right on his glove and knocked the ball out…I was trying to get it out of there somehow.”

Radziewski finished with six strikeouts on the afternoon, moving into sole possession of eighth place in the program’s all-time list with 318.

“They’re a great ballclub, they’ve always been great,” Radziewski said of the Tar Heels lineup. “I was able to mix all my pitches in.”

Radziewski gave way to Miami’s talented young bullpen in the seventh. Sidewinder Cooper Hammond pitched 1.2 scoreless innings through the eighth, while closer Bryan Garcia registered his 15th save of the spring by recording the final four outs of the game.

Miami has earned a No. 1 seed in the ACC Tournament only once before: 2008, when it went 4-0 en route to a tournament championship. That season also marked Miami’s last trip to Omaha and the College World Series.

Just like his team captain opened the press conference, Morris closed it with understated confidence.

“Hopefully this is the start to some big things,” he said.

The Hurricanes will begin their run at the 2014 ACC Championship in Greensboro, N.C., on either Wednesday (May 21) or Thursday (May 22). Play-in games for teams seeded No. 7 through No. 10 begin Tuesday (May 20) at NewBridge Bank Park.