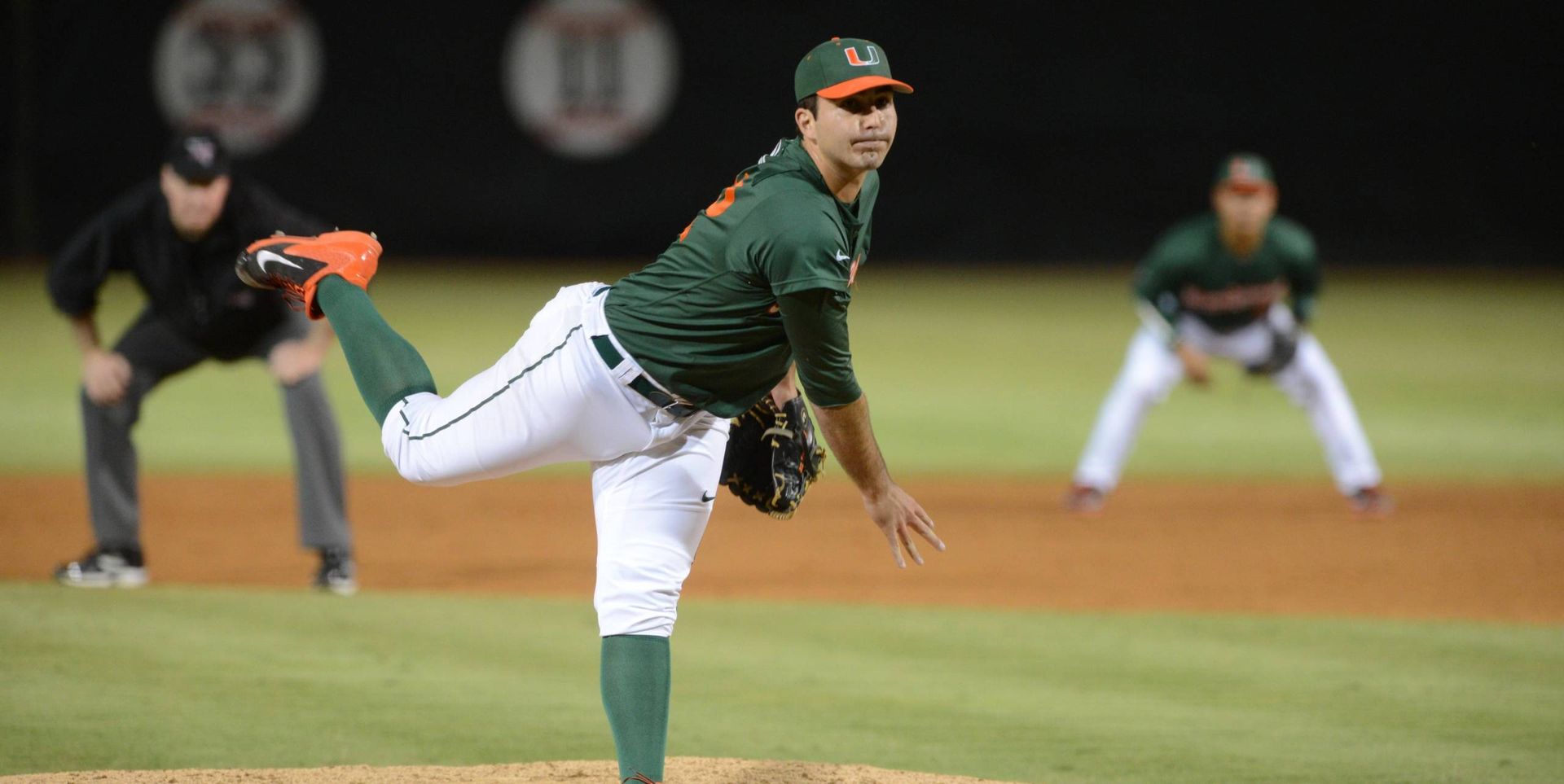 ORLANDO, Fla. — A sacrifice fly from senior Alex Hernandez broke a 5-5 deadlock in the top of the ninth inning, sending No. 20 Miami to a thrilling 6-5 victory over UCF Wednesday night at Jay Bergman Field.

The Knights rallied from a 5-0 deficit in the middle innings to tie the game in the eighth, but Hernandez’ deep flyout plated senior John Lawroski from third to regain a late lead. Lawroski, pinch running for Brad Fieger who connected on a ninth-inning single, took off for second with Brandon Lopez at bat, and eventually captured third on the play when Lopez singled.

The heads-up baserunning proved pivotal, as Lawroski’s run ended up the gamewinner.

Freshman Bryan Garcia (3-2), who entered in the eighth and allowed two inherited runners to score, finished off the Knights in the ninth to earn the win.

“You can throw in the white towel or give up, and our guys showed a lot of resiliency and a lot of character to be able to come back,” head coach Jim Morris said.

“It was good win for us. It was disappointing when you’re up five to let the other team claw back, but credit to them – they outhit us,” Morris said. “We’re very fortunate to win, given that situation. It was a big win for us – UCF was hot coming into this game.”

Salas scattered five hits and no runs across five innings of work, as Miami split the season series with UCF – who had come into the contest winners in 13 of its past 15 games. The Coral Gables, Fla., native, who had seen two appearances out of the bullpen since a disappointing March 11 home start against Bethune-Cookman, rebounded to extend Miami’s season-long winning streak.

“I couldn’t wait for this day. I probably had so much adrenaline in the first inning, I couldn’t really control myself,” Salas said. “I felt good today, I was going right after guys – they were aggressive and swung at a lot of my first pitches. I’m glad to come out of here with a good team win.”

Aided by some wild pitching from the Knights, the Hurricanes (22-12) took an early three-run lead and cruised on the back of Salas through the middle innings. UCF (20-14) utilized seven pitchers across the contest, but could not find the strikezone against Miami’s offense, which drew 10 walks.

Salas, on the other hand, threw 49 of his 67 pitches for strikes in an impressive five-inning stint.

“I was trying to gets outs. I didn’t really think about pitch count or inning limit or anything like that – I’m just trying to help us get a win,” Salas said.

Using the same formula in the fourth, Miami added two more runs to take a 3-0 lead. Walks to junior Garrett Kennedy and sophomore Johnny Ruiz put two runners on base, and Knights reliever Joe Marotta plunked Carey to load the bases. Senior Tyler Palmer came through on his opportunity, driving a pitch from Zac Favre – UCF’s fourth pitcher in as many innings – into leftfield to score Kennedy.

An error on the play from Knights outfielder JoMarcos Woods helped score Ruiz all the way from second, moving Miami’s lead to 3-0. Favre did well to limit the damage, however, striking out Abreu and Collins for the final two outs of the inning.

Collins rocketed a double into rightfield in his first at bat, extending his career-long hitting streak to six games. He finished the night 2-for-4 with two RBI, including a two-out, bases-loaded single in the sixth that stretched Miami’s lead to 5-0.

Walks from Johnny Ruiz and Abreu, as well as a fielder’s choice from Palmer, helped Miami load the bases for the third time in the sixth. With two outs, Collins ripped a single off UCF reliever Parker Thomas through the rightside to plate two runners. The RBI’s were the team-leading 28th and 29th of the season for Collins.

UCF rallied for three runs off Miami’s bullpen in the sixth with RBI singles from Sam Tolleson and Jordan Savinon, as well as an RBI groundout from Kam Gellinger, to cut Miami’s lead to just two runs at 5-3.

Facing the top of the Knights order, sophomore Thomas Woodrey returned for the seventh and quickly retired UCF. After getting a pop-up from leadoff hitter Dylan Moore to shallow right, Woodrey struck out Erik Barber and then caught Derrick Salberg in a pickle for the final out of the inning.

Garcia entered with two runners on base in in the eighth and allowed both to score, as a wild pitch scored one run and an RBI single from Savinon completed the UCF comeback at 5-5.

With Miami back on top 6-5, Garcia allowed a leadoff double in the home half of the ninth before retiring the Knights. Miami captured its ninth straight victory in front of a split crowd of 2,021 fans at Jay Bergman Field.

“In an environment like this, it’s big to get a win. It’s a tough place to play and they have a great ballclub,” Salas said. “Guys coming up with little plays – Lawroski stealing a base ends up being the winning run – it’s little things like that this team is built on, and I think that sets us up well to have success down the road.”