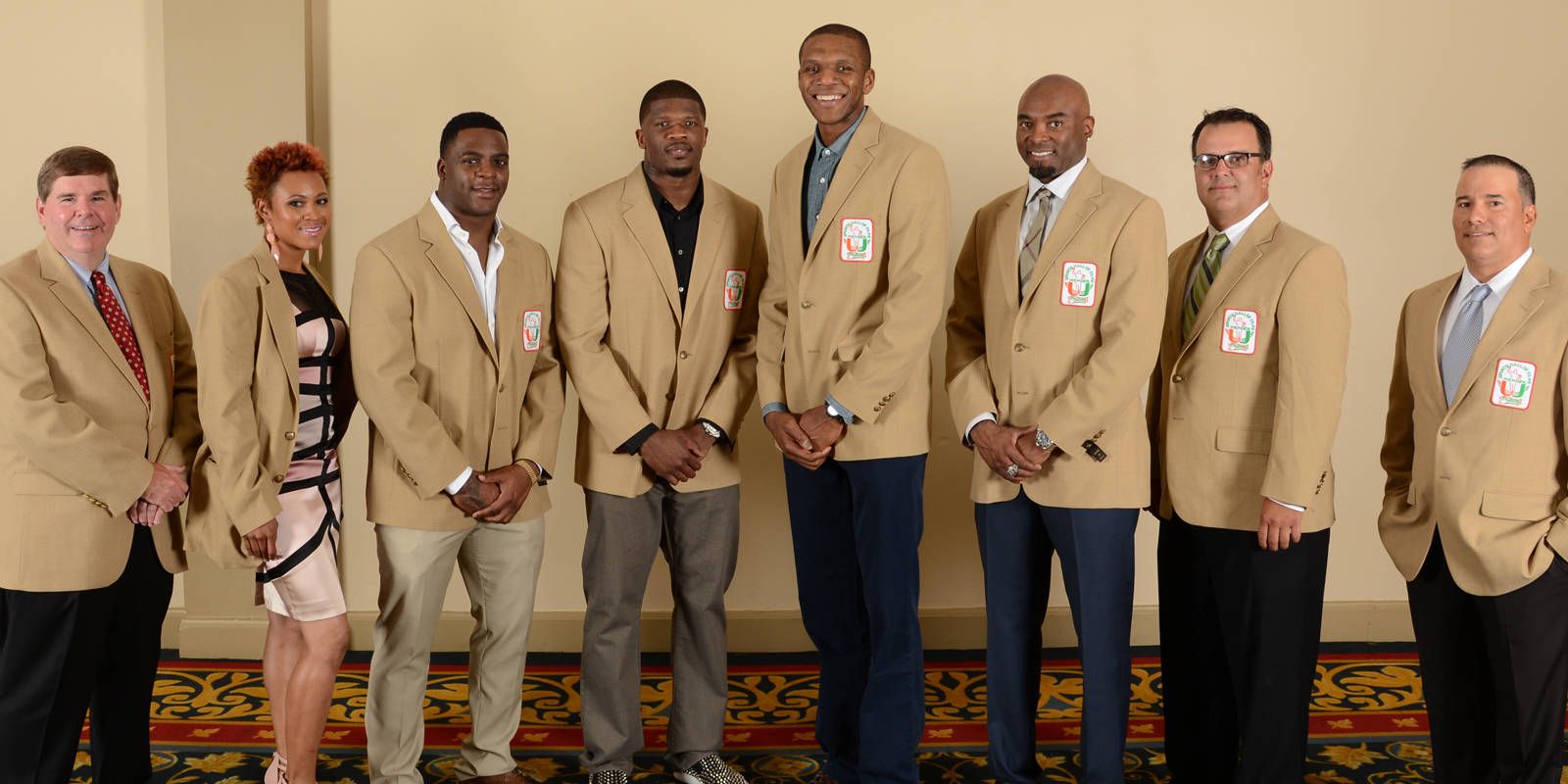 MIAMI – Eight Miami Hurricanes legends were inducted into the UM Sports Hall of Fame during its 46th induction banquet Thursday at Jungle Island.

Prior to the inductions, senior LB Denzel Perryman was presented with the Walter Kichefski Endowed Football Scholarship by Don Mariutto Jr.

One of the finest all-around players in UM history, James Jones is still listed in the record books as fourth in career blocked shots (192), seventh in career 3-point field goal percentage (.383), eighth in free throw percentage (.831), tenth in steals (137), 11th in field goals made (124) and 14th in total points (1,356).  He twice led Miami in rebounding and blocked shots, and once in steals. A four-time All-BIG EAST Academic team member, he was selected a 2003 Verizon Academic All-American.

Another in the long line of great Hurricane lefthanders, Jeff Morrison teamed with UMSHoF member Neal Heaton to form one of the finest 1-2 pitching punches in college baseball history, leading the Canes to the College World Series all four years (1978-1981). He is still fourth in career earned run average (2.37), fifth in career victories with 38 (38-6 overall), sixth in career innings pitched (387) and seventh in career appearances.  In 1981, he had a 12-1 record with a 2.93 ERA with five complete games and two shutouts. A three-time COSIDA Academic All-American (’79, ’80, ’81), Jeff was awarded the NCAA’s Post Graduate Scholarship Award in 1981.

Clinton Portis ranks fourth among Miami’s all-time leading rushers with 2,523 yards on 440 carries (seventh-most). He is tied with Edgerrin James for the school lead with 14 100-yard rushing games. His eight 100-yard rushing games in 2001 are the second-most all-time, and he gained at least 100 yards against all five of Miami’s ranked opponents that year, including 122 yards against FSU and 104 in the National Championship Game against Nebraska. His 21 career touchdowns rank eighth in school history.

The 1998 NCAA Diver of the Year, Rio Ramirez defected from Cuba in 1993 at a meet in Puerto Rico with $13 in his pocket and soon became one of Miami’s most decorated divers.  He was a three-time All-American and a four-time NCAA Champion, winning titles in the 1-meter springboard (1997, 1998 and 1999) and the 10-meter Platform (1999).  Rio was named the 1998 NCAA Diver of the Year when he won the 1-meter springboard, finished second in the 3-meter springboard and eighth in the 10-meter platform at the national championship meet.

One of the stars on both of UMSHoF member Coach Jim Morris‘ National Championship teams (1999 and 2001) Javy Rodriguez is second all-time in steals with 135. He led the Canes three years in stolen bases and led the NCAA in steals in 2001 with 66, the school single-season record. He twice led the Canes in batting average (.382 in 2001 and .376 in 2002) and is second all-time in hits (321).  He is third in at-bats, fourth in total bases and fifth in runs scored.  A career .369 hitter, his total is the all-time highest career average among UM’s middle infielders.

A two-time (1991 and 1992) All-BIG EAST wide receiver, Lamar Thomas left Miami as the school’s all-time leader in receptions with 144 (now second behind Reggie Wayne), second in touchdown receptions with 22 and receiving yards with 2,271 (now fourth). He led the Canes in receiving touchdowns in 1991 and 1992 and his 10 touchdowns in 1992 are the third-highest in school history.  He established a UM record with three touchdown receptions against Texas Tech – since tied twice. Lamar had a penchant for big catches in big games, most notably his seven receptions for 107 yards and the winning touchdown against Florida State in 1992.

The University of Miami Sports Hall of Fame was founded in 1966 by eight Dade County Circuit Court judges, who wanted to establish an organization that would recognized those student-athletes, coaches and administrators who excelled at their sport and brought acclaim to the University of Miami through their achievements and championships.

For the latest information on the Miami Hurricanes, follow us on Twitter, @HurricaneSports. For the most accurate and up to date information delivered to your phone, download the official Miami Hurricanes app for your Droid or iPhone. For more information of the UM Sports Hall of Fame, visit www.UMSportsHallofFame.com or call 305-284-2775.