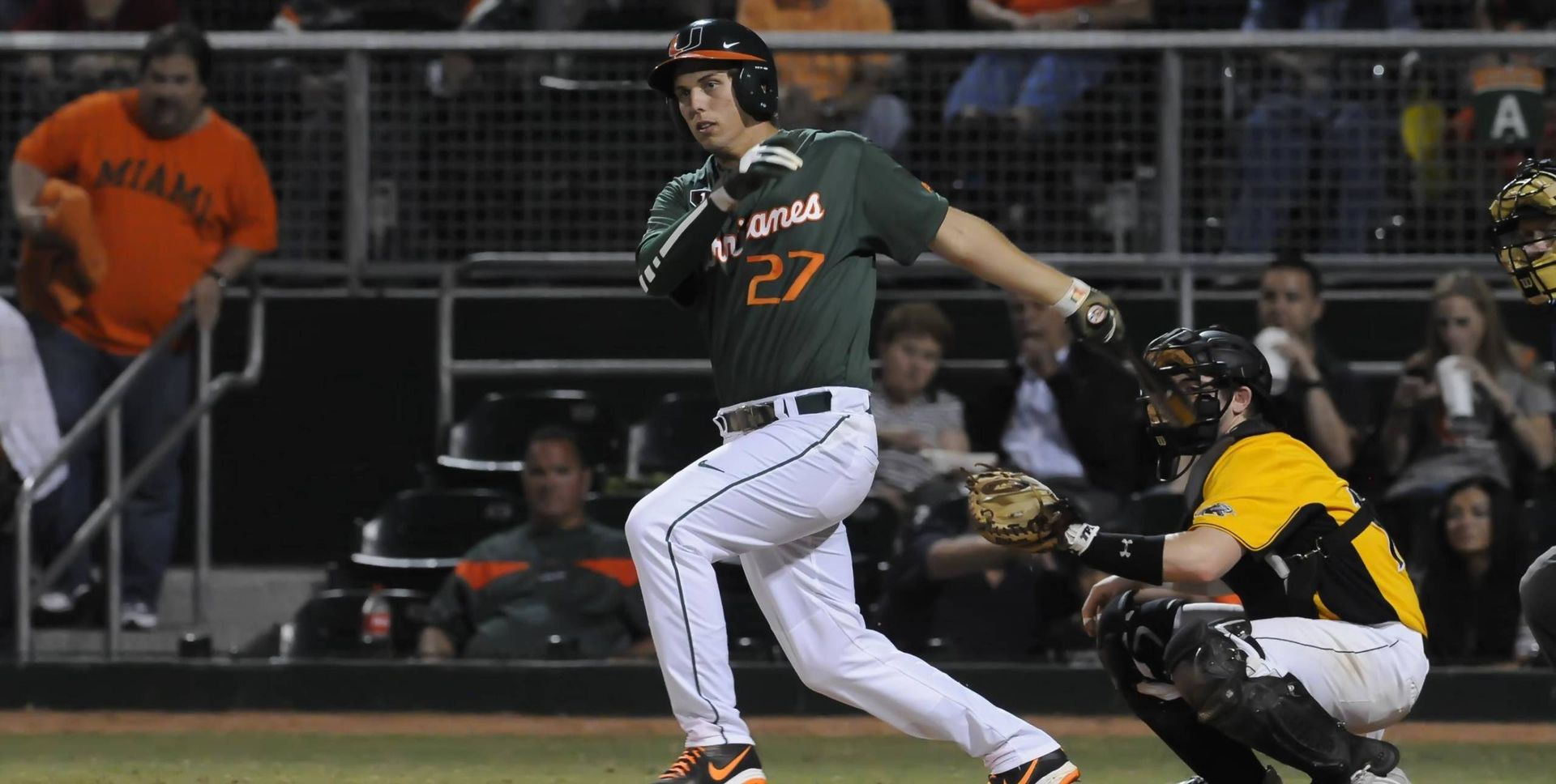 No. 24 Baseball Clinches Series With 4-3 Win

“I made sure to keep the ball low, and I really threw my one-seam [fastball] a lot,” Suarez said of his keys to success. “I had a feel for all my pitches today. It was a great day for me.”

Despite a two-run home run in the eighth that cut Miami’s lead to 4-3, freshman Bryan Garcia shut down the Hokies for his conference-leading ninth save of the spring. The win gave the Hurricanes back-to-back road series victories for the first time since 2011.

Garcia also recorded a save in Miami’s come-from-behind win on Friday night.

“Every game, you have to go in with the same approach,” Garcia said. “You have to go in, throw strikes, and get outs. It’s exciting to have this role, but finishing on top each game is the most important part.”

Miami plated a single run in each of the first three innings, giving Suarez a 3-0 lead in the early going. An RBI single from Zack Collins in the first, an RBI single from Brad Fieger in the second, and an RBI groundout from Johnny Ruiz in the third sent Miami to a comfortable lead against Virginia Tech lefthander Sean Keselica (2-2).

Collins’ RBi was the team-leading 25th of the season for the freshman slugger, who drove in the winning run in Friday’s 8-7 win.

“It’s great,” Suarez said about pitching with a lead. “I’m more confident when I throw, and I don’t put as much pressure on myself because we’re already up.”

Miami (20-12, 10-4 ACC) used small ball to plate its opening run, when senior Dale Carey reached via drag bunt, stole second, and advanced to third on a groundout from freshman Willie Abreu. Collins came through with the clutch two-out hit, looping a ball into shallow right to score Carey from third.

Freshman Sebastian Diaz, making his second start in the last three games, opened the second inning with a double and took third with some heads-up baserunning on a flyout from freshman Brad Zunica. Fieger’s RBI single through the leftside plated Diaz from third, as Miami jumped out to a 2-0 lead.

Abreu scored the third run of the afternoon after reaching base and taking second via Logan Bible’s error in leftfield. Collins advanced Abreu to third with a deep flyout, and Ruiz’ groundout to first sent Miami to a 3-0 advantage.

Abreu’s career-best seven-game hitting streak was snapped in the win.

Virginia Tech (14-14-1, 5-9 ACC) would strike back for a run in the third, as an RBI groundout from Alex Perez plated Ricky Surum, who doubled to open the inning.

Despite the RBI groundout, Miami received another strong from Suarez, who cruised through the middle innings.

Miami tacked on a run in the seventh, when Fieger – who recorded his second three-hit game of the season in the win – led off with a single up the middle. After taking second on a wild pitch and third on a sacrifice bunt from Brandon Lopez, Fieger scored on a wild pitch from Virginia Tech reliever Sean Kennedy to make it 4-1 in favor of the Hurricanes.

Suarez kept the Hokies largely off balance through the eighth, when a two-run home run from Brendon Hayden cut the Miami lead to just 4-3.

“I saw the wind was blowing out early, and I made the mistake in the eighth, but keeping the ball low was key,” Suarez said.

The Hurricanes return to English Field for the finale of their weekend in Blacksburg, Va., on Sunday, April 6. First pitch for the game, slated for broadcast on ESPN 3, is set for 1 p.m.