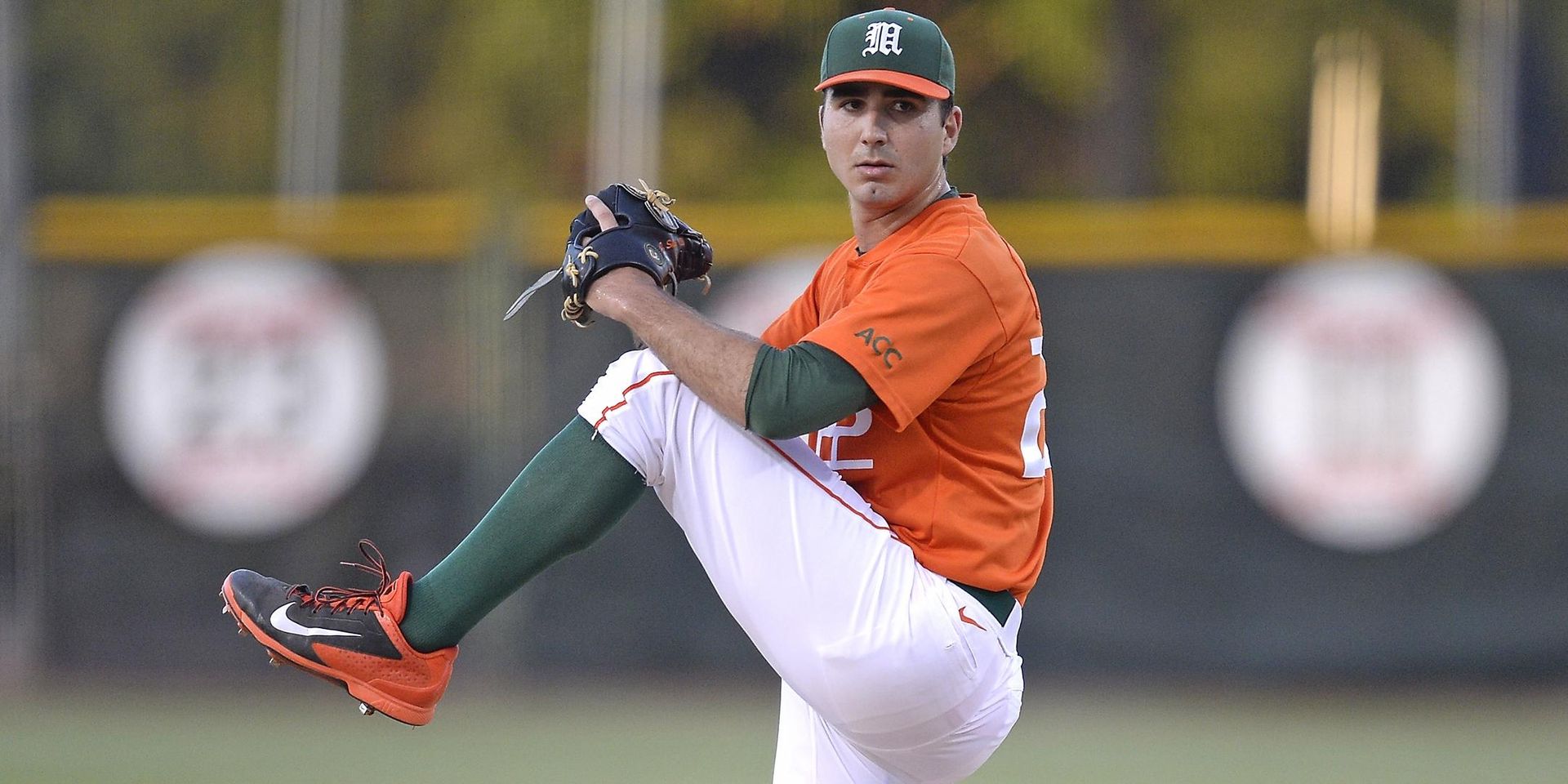 “I thought it was a good team win,” head coach Jim Morris said. “I thought we pitched good, played good defense, and got a lot of hits from a lot of guys.”

The Hurricane offense exploded for six runs in the fourth inning, as Miami jumped out to a commanding lead and cruised behind an impressive relief performance from senior Javi Salas (2-3). RBI doubles from Dale Carey and Zack Collins keyed the outburst for Miami, who tied a season-long winning streak with the win.

“I’ve been working a lot with [pitching coach] J.D. [Arteaga] to make sure I’m pitching down in the zone,” Salas said. “That’s when I’m most effective. I’m not really a strikeout guy, so I’m trying to pitch to contact. I felt good out there today, and my defense made some good plays for me.”

Salas tossed 3.0 clean innings of relief, allowing just two hits and striking out two to earn the victory. The Coral Gables native took extra satisfaction in topping the Wildcats, who tagged him for six runs in his last start in a disappointing 7-3 defeat.

“I felt like I had something to prove against them,” Salas said. “Obviously my last outing was disappointing. It felt good today…we can take that flight tomorrow and we’re all going to be happy to go up there in another ACC series and take care of business.’

Freshman Derik Beauprez made his third consecutive midweek start in the win, throwing 4.0 innings and scattering five hits and one earned run. The Colorado native successfully worked his way out of some early jams, finishing the night with three strikeouts on 83 pitches. He gave way to Salas, who combined with freshman Danny Garcia and sophomore Enrique Sosa to protect the lead the rest of the way.

After falling behind in the early going, the Hurricanes (18-12) struck for two runs off Bethune-Cookman starter John Sever in the bottom of the third to take a 2-1 lead.

Freshman Sebastian Diaz, making his career-first start at designated hitter, opened the action with a four-pitch walk. A sacrifice bunt from Alex Hernandez moved Diaz to second, and senior Dale Carey was hit by a Sever pitch to put two runners on base. Senior Tyler Palmer delivered on the opportunity, cracking an RBI single through the leftside to plate a sliding Diaz.

With two outs, Willie Abreu laced a two-out hit up the middle to score Carey, as Miami took a 2-1 advantage in front of a crowd of 2,322.

Abreu extended his career-long hitting streak to six games with a 2-for-3 performance at the plate. The multi-hit performance was his team-high 11th of the season.

Miami blew the game open with six runs in the fourth, as a bases-clearing double from freshman slugger Zack Collins capped the scoring and made it 8-1 in favor of the Hurricanes. All six runs – the most by Miami in a single inning this season – were scored with two outs.

Back-to-back walks from sophomore Brandon Lopez and Diaz put two runners on base, and an RBI single from Alex Hernandez to left scored the first run of the inning. The team-leading 10th double of the season from Carey made it 4-1 and put two runners in scoring position, and an opposite-field basehit from Palmer made it 5-1.

After Abreu walked to load the bases, Collins unloaded on a 2-2 curveball that split the outfield and upped Miami’s lead to 8-1. The Pembroke Pines, Fla., native continued a torrid pace at the plate, where he’s hitting .378 over the last ten games.

“You always have more confidence when you get it together,” the freshman slugger said. “It’s all the same mindset. It’s just putting the ball in play with two strikes.”

Collins three-RBI performance brought his season total to a team-high 22, including 11 over his last five games.

“I’ve always had the same approach,” he said. “I’ve been putting the bat on the ball now, grinding out at bats with two strikes, trying not to strike out as much and put the ball in play,”

The hit chased Sever (3-2), who allowed a career-high eight runs on eight hits and four walks over 3.2 innings.

Salas, Garcia and Sosa combined to keep the Wildcats off the board for the final five innings, allowing just two combined hits. Miami’s bullpen extended its scoreless streak to 16.2 consecutive innings dating back to a March 24 matchup against Virginia.

“It was important to get [Javi] back out and pitching,” Morris said. “Whether it’s in the bullpen or in the rotation, we need him pitching for us, and we need his leadership on our team.”

Sebastian Diaz walked five times in his start, marking the first such performance since Miami Hurricanes legend Mike Fiore walked five times against Mercer in 1988. A bases-loaded walk from Diaz made it 9-1 in the eighth, while an RBI single from Hernandez capped the scoring at 10-1.

Miami next travels to Blacksburg, Va., for an ACC series matchup with Virginia Tech beginning Friday, April 4. First pitch for the series opener, slated for broadcast on ESPN3, is set for 5:30 p.m.