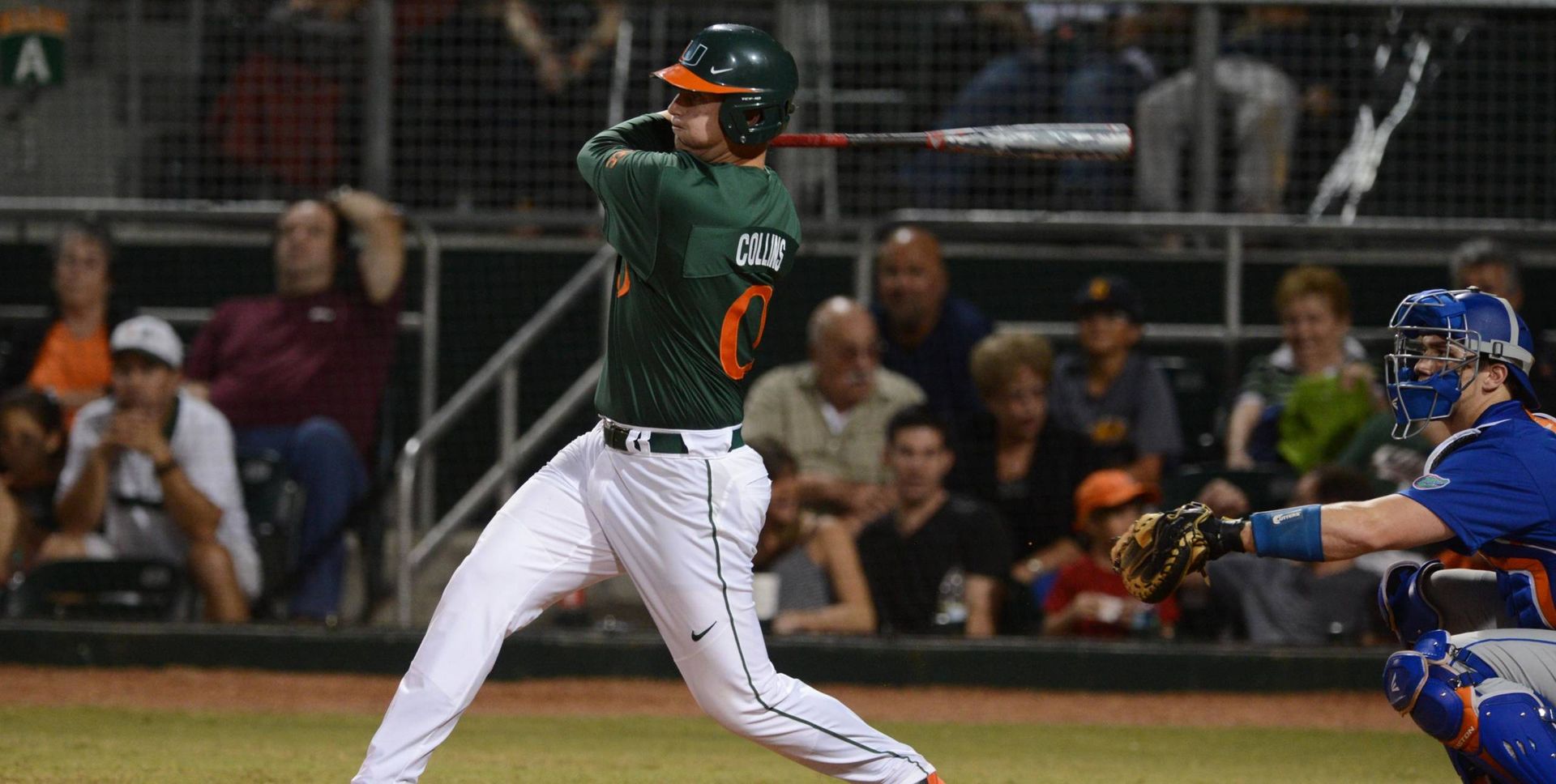 No. 25 Baseball Drops Matchup with UCF

“They played well. Their pitcher threw outstanding,” head coach Jim Morris said. “He did a really good job all night staying ahead of hitters and working his ball down.”

UCF jumped out to an early lead, striking for two runs in the first inning off Miami lefthander Danny Garcia (0-1). The Miami, Fla., native allowed back-to-back singles to Derrick Salberg and Erik Barber, and then hit James Vasquez with a pitch to load the bases. A sacrifice fly from shortstop Tommy Williams and an RBI single from designated hitter Sam Tolleson gave the visitors a 2-0 advantage.

“We didn’t throw strikes, and we got ourselves in trouble,” Morris said. “[Olson] outpitched us and they outplayed us.”

Miami (11-10) would halve the deficit with a run in the third. Junior Garrett Kennedy opened the inning with a single, and would eventually take second on a passed ball charged to UCF catcher Jordan Savinon. Senior Dale Carey extended his hitting streak to a career-best 10 consecutive games with an infield single, and both runners advanced on a wild pitch from Olson.

A third Knights miscue – this one another wild pitch from Olson – plated Carey from third to make it 2-1.

“We were getting under balls,” freshman Zack Collins said. “Anyone in college baseball can catch a pop-up. If we would have stayed on top and hit line drivers and ground balls, I think everything might have gone better.”

UCF (10-12) would tack on another run in the fourth on an RBI groundout from Erik Barber to regain a two-run lead at 3-1.

Garcia was removed in favor of sophomore Enrique Sosa before the fifth inning. Garcia threw 90 pitches in the 4.0-inning outing with two strikeouts.

“I wasn’t adjusting to my pitches,” Garcia said. “I basically couldn’t throw strikes.”

Sosa pitched a scoreless fifth, but ran into trouble in the sixth when Miami’s defense committed two errors. A throwing error charged to Kennedy and a fielding error from Brandon Lopez on a potential double-play ball helped UCF tack on two more runs to widen the margin to 5-1.

The Knights tagged Miami’s bullpen for two more insurance runs in the seventh, jumping out to a 7-1 lead on RBI singles from JoMarcos Woods and Dylan Moore.

A solo home run from Collins off Olson in the bottom of the seventh made it 7-2.

“It was a changeup away, a good pitch by him. I just tried to stay on it and put the barrel on it,” Collins said of his home run swing.

But that was as close as the Hurricanes would get, as UCF plated the game’s final two runs in the top half of the ninth to complete the 9-2 victory.

Miami travels to Hammond Stadium in Fort Myers, Fla., Wednesday for a matchup with Florida Gulf Coast. First pitch is set for 6:30 p.m.