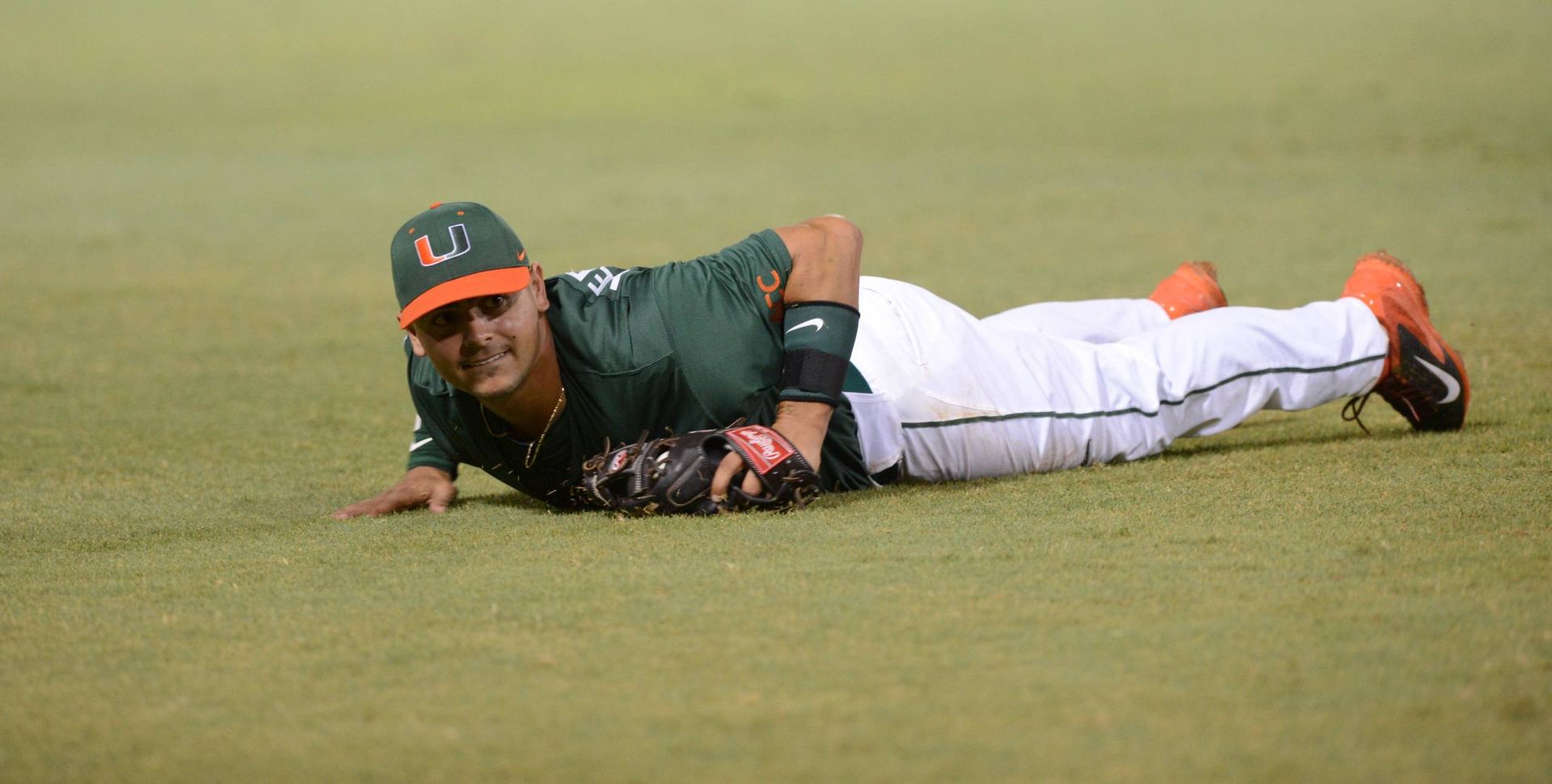 ATLANTA, Ga — In another back-and-forth affair at Russ Chandler Stadium, No. 13 Miami dropped the first game of its Saturday doubleheader 13-7 to host Georgia Tech.

With Miami leading 7-6 heading into the bottom of the eighth inning, Georgia Tech struck for seven runs to take a commanding late advantage. Game two of the doubleheader and the rubber match of the series, slated for live coverage on CSS with ESPN3 simulcast, is set for 7:30 p.m.

Similar to Friday’s series opener, the Hurricanes wasted little time in opening the game’s scoring. Leadoff batter Dale Carey cracked his fifth double of the season to extend his hitting streak to eight games, and scored on a two-out RBI single from senior Brad Fieger to make it 1-0 in the top of the first.

And Miami wasn’t finished there. Back-to-back singles from senior Alex Hernandez and sophomore David Thompson loaded the bases, and a free pass from Tech starter Matt Grimes issued to sophomore Brandon Lopez walked in a run to make it 2-0 in favor of the visitors. Miami connected for four of its 10 hits off Grimes in the game’s first inning.

The Hurricanes tacked on four more runs in the third, sending eight batters to the plate and connecting for six more hits. An RBI triple from Thompson scored Hernandez for a 3-0 lead, and Thompson beat a throw home on a weak grounder from Lopez to move the advantage to 4-0. Edgar Michelangeli and Garrett Kennedy added to Miami’s onslaught, connecting on an RBI double and an RBI single, respectively, as Miami took a 6-0 lead into the bottom of the third and chased Grimes after just 3.0 innings.

The hosts would begin to chip away, however, and came back to tie the game 6-6 by the bottom of the fifth.

After loading the bases with no outs in the bottom half of the third, Georgia Tech tagged Miami lefthander Bryan Radziewski for its first two runs. A sacrifice fly from Mott Hyde and an RBI infield single from A.J. Murray cut the Tech deficit to 6-2, but Radziewski did well to limit the damage. The Miami, Fla., native got a flyout of Elliott Barzilli to rightfield to end the inning with the bases still loaded.

Two more runs in the fourth came on an RBI single from Hyde and a sacrifice fly from Ryan Peurifoy. The Yellow Jackets tied the game in the fifth, when a two-RBI single from Daniel Spingola made it 6-6 and chased Radziewski out of the game.

Miami regained a one-run advantage on an RBI groundout from Michelangeli in the top half of the seventh. Tech reliever Matt Gorst was effective in his three innings, but opened the seventh with back-to-back walks to Hernandez and Thompson. After a wild pitch from Gorst advanced Thompson to third, Michelangeli connected on a grounder to the middle infield that plated Thompson.

Trailing 7-6, Georgia Tech captured its first lead of the weekend with seven runs in the bottom of the eighth. RBI doubles from Matt Gonzalez, Keenan Innis and Gold helped the Yellow Jackets take a commanding 13-7 lead heading into the ninth. Javi Salas (1-3) was charged with the loss.