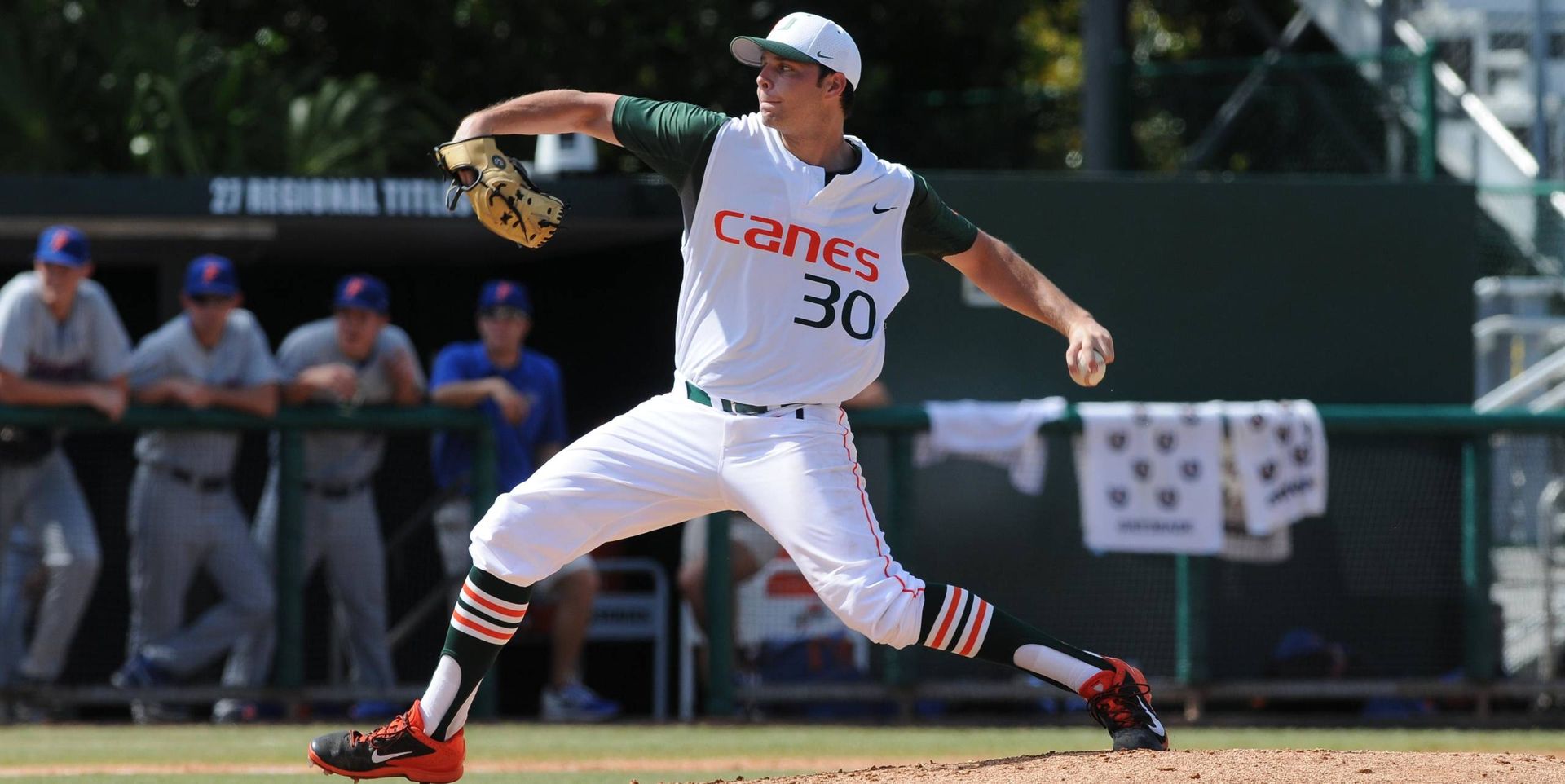 No. 16 Baseball Finishes Sweep of Eagles

The sweep was the first of the spring for the Hurricanes (10-5, 3-0 ACC), who have won five straight games and three of four series to open the season.

“It was a big win today,” head coach Jim Morris said. “Our guys played well, in particular Andy [Suarez]. We didn’t have a sweep last year in an ACC series. To be able to sweep and get out to a fast start is really big.”

Suarez said the key to his success on a windy day at The Light was keeping the ball low. He retired 14 batters by way of groundouts, compared to just four flyouts.

“When I was warming up, I noticed the wind was blowing in a little bit,” Suarez said. “I made sure to attack the zone, keep the ball on the ground, and it worked out for me.”

Boston College righthander Jeff Burke (0-1) kept Miami off the scoreboard until the sixth, when the Hurricanes struck for four runs.

Dale Carey led off the inning with a single that dropped into shallow right, while a sacrifice bunt from Tyler Palmer advanced him to second. After Burke intentionally walked freshman Willie Abreu, a bloop single from Brad Fieger landed in the infield to set up a bases-loaded situation.

An RBI single from sophomore David Thompson ripped off the arm of Burke scored Fieger to make it 3-0. With runners on the corners and two outs, a passed ball charged to Boston College catcher Nick Sciortino scored the fourth and final run of the inning.

Thompson, who entered the weekend hitting just .243, finished the weekend with a team-high five hits to raise his average to .304.

“I started off real slow this year,” Thompson said. “I’ve made some adjustments in the cages with [assistant coaches] Gino [DiMare] and Rich [Witten], and started to get a lot more comfortable at the plate.”

Suarez (2-1) was sharp for the Hurricanes, retiring the first 13 batters he faced until a one-out walk to Joe Cronin in the fifth. After allowing an RBI single to Nick Colucci in the seventh, Suarez retired Scirotino on a fielder’s choice and got Gabriel Hernandez on a foul pop-up near the home dugout to end his afternoon in front of 2,650 fans.

“This was a huge week,” Suarez said. “At Florida State, a lot of us didn’t pitch well. Coming back [starting] when we played Villanova, our pitching did good. I feel like for the rest of the season, we’re going to be good.”

The Hurricanes bullpen allowed two runs in the eighth, but freshman closer Bryan Garcia shut down the Eagles for his fifth save of the season. It marked the second time this weekend and fourth this season where Garcia has recorded a save requiring more than one inning.

“It feels good,” Garcia said of his stint. “It’s good that Coach Morris has confidence in me to bring me in the eighth and know that I’m going to be able to get both innings done.”

Miami returns to Alex Rodriguez Park at Mark Light Field for a midweek matchup with Bethune-Cookman on Tuesday, March 11. First pitch is set for 6 p.m.