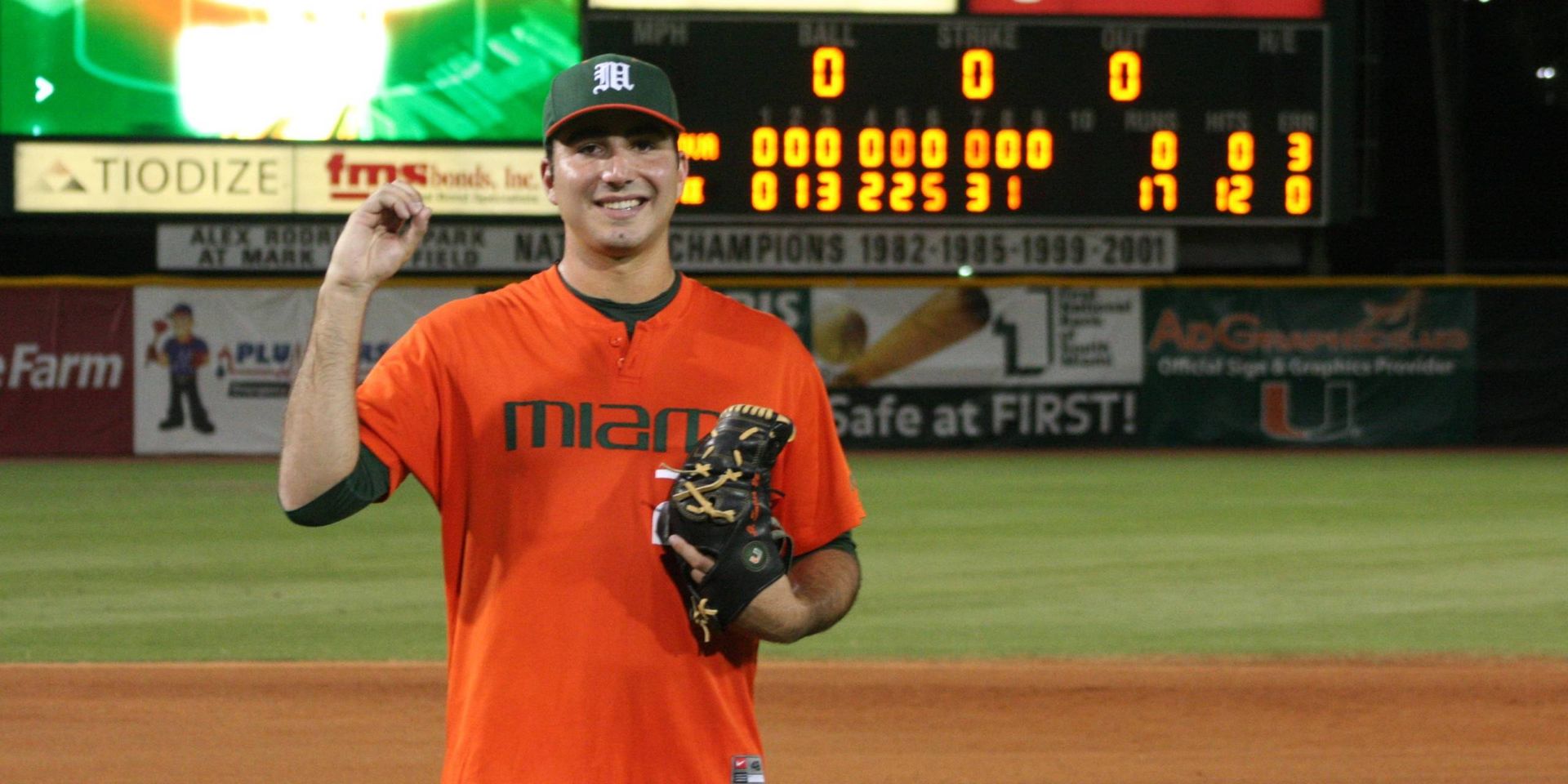 The senior righthander and team captain retired all 27 Wildcats batters he faced, needing just 113 pitches to get through perfection.

Salas became just the second Miami Hurricane to ever throw a perfect game and the first since Kevin Sheary on March 14, 1987. He struck out Villanova pinch hitter Derrick May Jr. for the final out of the game, sending his teammates into a frenzied celebration in front of the mound.

“I don’t even know what to think,” Salas said after the game. “In that last inning, I was trying to keep my adrenaline down. The fans were getting up, and I couldn’t believe it. It’s a dream come true.”

Salas said it took some superstitious silent treatment from his teammates in the dugout after the sixth inning to realize the potential magnitude of his performance.

“I got back in the dugout and I was kind of isolated and no one was talking to me,” he said. “That’s when I realized what I had going. I had a couple of 3-1 counts there that I was hoping I didn’t walk a guy. I had to keep my approach and stay aggressive going after these guys. Luck had it for me today.”

PERFECTION: Get the shirt here

Salas credited his team’s performance in all three phases of the game as the recipe for success against the Wildcats (2-8).

“That’s the only reason I showed up today – to get our team back on track,” Salas said. “I didn’t care how it happened or what the score was, we really needed to win. I think it all came together tonight. We played great defense, we hit the ball, and we got a little luck with pitching.”

Head coach Jim Morris was especially proud of his rising star, who turned down the chance at professional baseball after being drafted by the Minnesota Twins in the 2013 MLB Draft.

Salas was elected team captain for the second consecutive year prior to 2014 – his final season as a Hurricane.

“He’s our captain, one of our hardest workers and a leader by example,” Morris said. “He’s a pre-law student. He’s everything. He is a perfect student-athlete.”

The Hurricanes (6-5) scored four runs over the game’s first three innings in support of Salas, taking a 4-0 lead on a two-out, two-RBI single from freshman outfielder Willie Abreu in the bottom of the third.

Sophomore David Thompson broke out of a funk with an RBI single in the second inning that scored Abreu, who reached via error and stole second base.

Brad Fieger, who entered the game as the ACC’s active leader in career hits, knocked in sophomore Brandon Lopez with a bloop single to left to make it 2-0 in the third. Alex Hernandez followed Fieger with his team-leading fifth double of the season off Villanova starter Hunter Schryver (0-2), and both seniors scored on Abreu’s single just one pitch later.

Miami added two more runs in the fourth inning, aided by two balks from Villanova reliever Donovan Armas in the frame. Schryver, who hit freshman Zack Collins with his first pitch of the fourth and then walked freshman Brad Zunica on four pitches, was pulled in favor of the righthanded freshman after 3.0+ innings.

Armas nearly escaped the jam with back-to-back outs, but balked two runners into scoring position and then allowed an RBI single to senior Tyler Palmer. A second balk from Armas scored Lopez from third base, as Miami took a 6-0 lead into the fifth inning.

The hosts blew the game open with five runs the sixth, including Fieger’s first home run of the season belted over the leftfield fence. Thompson’s two-RBI double into the left-center gap sent Miami to a 12-0 lead. A double from Collins into the right-center gap added three more runs in the seventh, as Miami went up 16-0.

Salas was in no need of offensive fireworks Tuesday. The righthander was in complete control throughout the game. He threw his 100th pitch of the night in the eighth inning, and struck out May Jr., swinging to end the ninth. The Coral Gables, Fla., native struck out six batters on the night, none more exciting than the final three-pitch rendition that sent the crowd of 2,435 into standing ovation.

He celebrated with his family after the game, and joined his younger brother Jorge, a student radio broadcaster for WVUM 90.5, in the radio booth for a postgame interview.

“I hope this gets us going,” Salas said. “We start ACC play this weekend, so we really have to get on a roll here.”