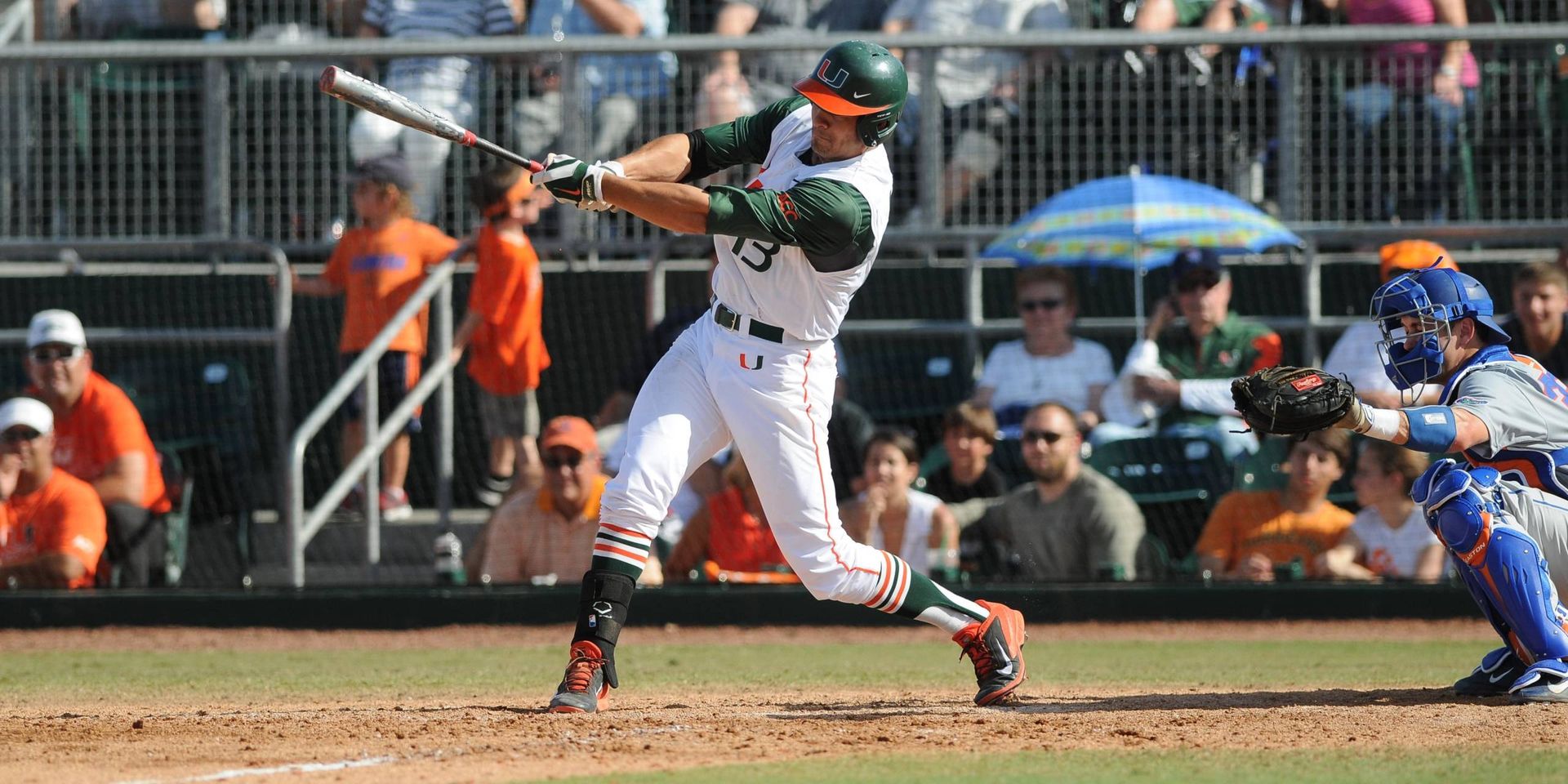 TALLAHASSEE, Fla. – No. 14 Miami fought back from a five-run deficit to tie the series finale against No. 2 Florida State, but ultimately dropped the afternoon matchup 13-6 at Dick Howser Stadium.

Trailing 6-1 in the bottom of the third, Miami got two runs back on a fourth-inning home run from freshman Zack Collins and another three runs on sixth-inning doubles from Brad Zunica and Dale Carey.

But the Seminoles (8-1) tagged the Miami bullpen for seven runs in the bottom of the sixth, as the Hurricanes (5-5) dropped game three in front of 5,902 fans.

Sunday marked the first time Miami’s trio of vaunted freshmen sluggers – Willie Abreu, Collins and Zunica – found themselves on the same line-up card. The decision paid dividends for head coach Jim Morris, as the three combined for seven hits on the afternoon, including the second career home run for Collins and a career-high three hits from Abreu.

Each recorded hits consecutively in their first at bats of the game, when Miami took a 1-0 advantage in the second inning. Abreu reached on an opposite-field single down the third base line, and Collins followed with a double over the head of Seminoles leftfielder DJ Stewart to put two runners in scoring position.

Making his career-first start as a Miami Hurricane, Zunica wasted little time in making his presence felt. The 6-foot-6 slugger flared an offering from Seminoles starter Mike Compton into shallow left, scoring Abreu from third for his career-first RBI to give Miami a 1-0 lead.

But Florida State struck back for six runs off Miami starter Andrew Suarez in the third inning. A two-RBI single from Stewart with the bases loaded gave the Seminoles a 2-1 advantage, while a triple from John Nogowski past the outstretched glove of a diving Dale Carey in center plated two more runs. Jose Brizuela’s RBI single to right capped the scoring for the hosts.

Finding themselves down by five runs early, the Hurricanes (5-5) responded in the top half of the fourth. Abreu ripped a one-out single up the middle for his second hit of the day, and scored on Collins’ no-doubter belted over the high fence in rightfield.

The home run marked the eighth of the season and first on the weekend for either team.

Miami threatened but could not cut deeper in the fifth, when Carey led off the inning with a double into the rightfield corner. After a sacrifice bunt from senior Tyler Palmer moved Carey to third, senior Brad Fieger walked to put runners on the corners. But Alex Hernandez struck out on a called third strike and Garrett Kennedy popped up to shallow left to end the threat.

The freshmen combination proved successful once again in the sixth, when an RBI double from Zunica crushed over the head of Stewart cut the deficit to 6-4. Abreu, who recorded his third hit of the afternoon on a single off reliever Billy Strode to open the inning, legged his way home all the way from first to close the gap to two runs.

Sophomore Brandon Lopez took second on a fly ball that centerfielder Ben DeLuzio lost in the sun, with Zunica taking third on the play to put two runners in scoring position. Carey’s second double of the game on a chopper to left field completed the comeback, plating both Zunica and Lopez to tie the game 6-6.

The excitement was short-lived, however, as AJ Salcines (0-1) was tagged for seven runs in the bottom of the frame. Defensive miscues by the Hurricanes aided the Florida State offense, which registered six of its 15 hits in the inning.