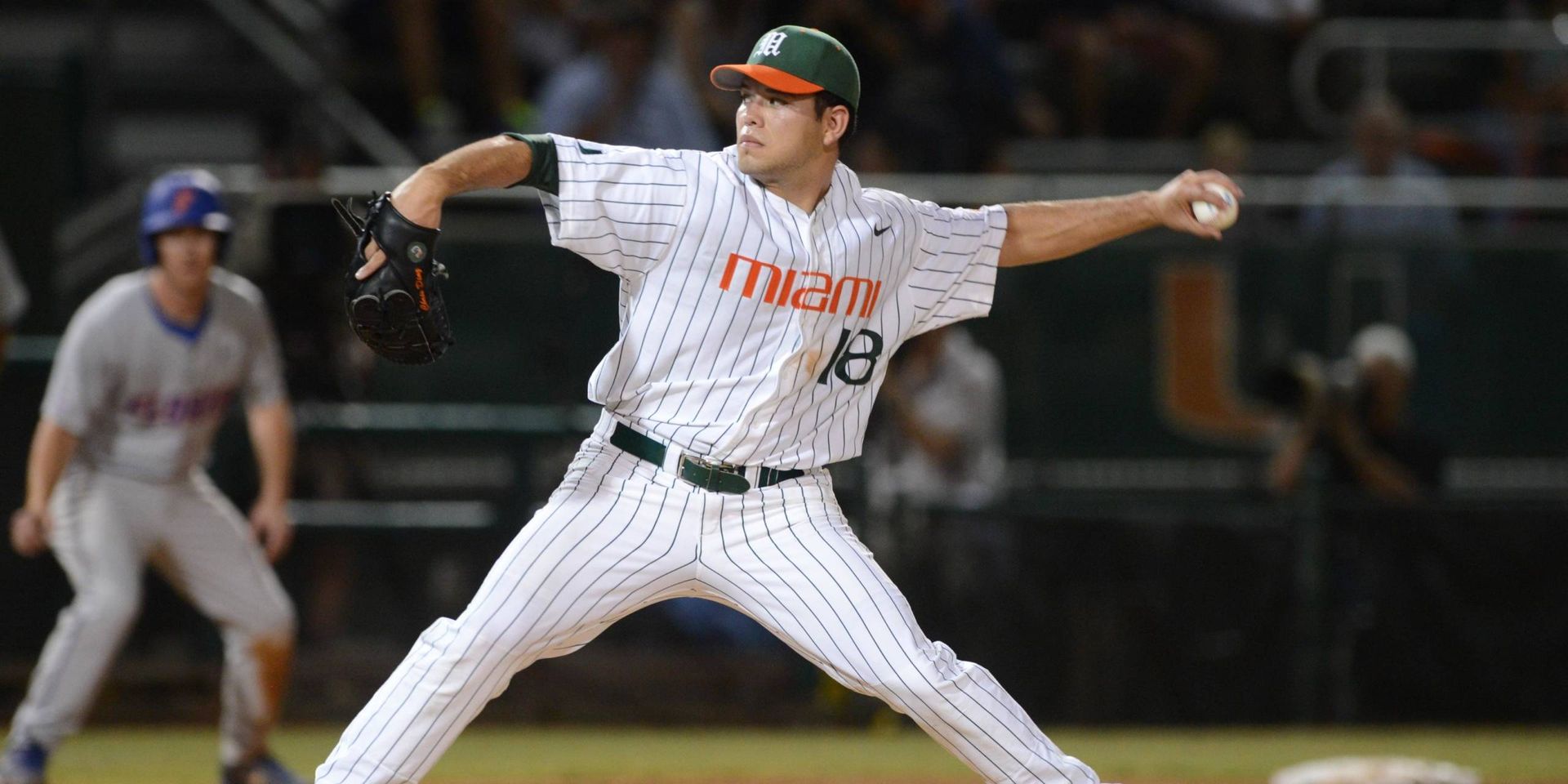 “He pitched great,” said head coach Jim Morris of Diaz, who improved his personal record to 3-0 with the win. “He’s one of those guys who goes right after people. He’s got good sink, gets a lot of groundballs. If you play good defense behind him, you have a good chance to win. I thought he had the guys off-balance all night. He pitched extremely well.”

Freshman righthander Bryan Garcia earned his third save of the season, pitching the final two innings in the close victory. The win marked Miami’s third of the season against a team ranked in the top 25 and continued an impressive albeit brief trend; Miami handed then-No. 1 and undefeated North Carolina (16-0) its first loss of the season on March 15, 2013 at Boshamer Stadium.

It was the Seminoles (6-1) who struck first in Friday’s opener, scoring a run on a two-out throwing error by sophomore David Thompson in the bottom of the first.

Miami loaded the bases and threatened to tie the game in the third, but FSU starter Luke Weaver (2-1) retired senior Brad Fieger on a groundout to end the inning. Junior catcher Garrett Kennedy and sophomore shortstop Brandon Lopez, making his first official start of 2014 after recovering from a knee injury, connected for back-to-back singles in the frame.

Diaz (3-0), who went a season long-tying seven innings in the outing, impressively worked his way out of a tough jam in the third to keep the visitors within one run. After allowing a double to Josh Delph and an infield single to Justin Gonzalez to put runners on the corners with no outs, Diaz struck out DJ Stewart, fielded Brett Knief’s attempted squeeze perfectly to get Delph at home, and struck out John Nogowski to end the inning.

“I was keeping the ball down and had a lot of sink on my ball,” Diaz said. “They were hitting it into the ground a lot. My defense played great today, and they helped me win.”

Diaz’ work paid off, as a sacrifice fly from senior infielder Alex Hernandez off Weaver a half-inning later tied the game 1-1. Freshman sluggers Willie Abreu and Zack Collins reached on a single and walk respectively, and Abreu advanced to third on a passed ball charged to Seminoles catcher Danny De La Calle.

Hernandez then lifted a Weaver offering deep enough to center to plate Abreu, who scored standing up to knot the game 1-1.

Miami took its first lead of the game in the sixth, when back-to-back singles from Dale Carey and Tyler Palmer put the visitors in position to strike off Weaver. An infield single from Fieger looked to have loaded the bases, but an ill-advised throw from Justin Gonzalez at short made its way past the Seminoles first baseman Nogowski.

Carey scored from second and both Palmer and Fieger advanced a base. Another sacrifice fly – this one from Thompson – plated Palmer from third to make it 3-1 in favor of the Hurricanes. Carey’s run was the only earned allowed by Weaver, who was tagged with the loss after six innings of work.

After holding the Seminoles off the board in the bottom of the third, Diaz retired 11 consecutive batters through the middle innings to maintain striking distance for the Hurricanes. The crowd of 5,599 did little to deter Diaz, who earned his third straight win to open the season.

“This is why you come to Miami,” the southpaw said. “To play in front of a crowd like this at Florida State. They get loud at times, but we have to focus and make our pitches.”

99 pitches deep into his outing, Diaz gave way to Garcia after in the eighth. The Miami, Fla., native allowed just one hit and one walk in his two-inning stint, clinching the win for the visitors.

“It’s always great to win the first game of the series, especially here at Florida State with a big crowd,” Diaz said. “We have Bryan [Radziewski] on the mound [tomorrow], and he’s always going to compete and give us a chance to win.”

First pitch for Saturday’s matchup at Dick Howser Stadium, slated for broadcast on ESPN3, is set for 2 p.m.