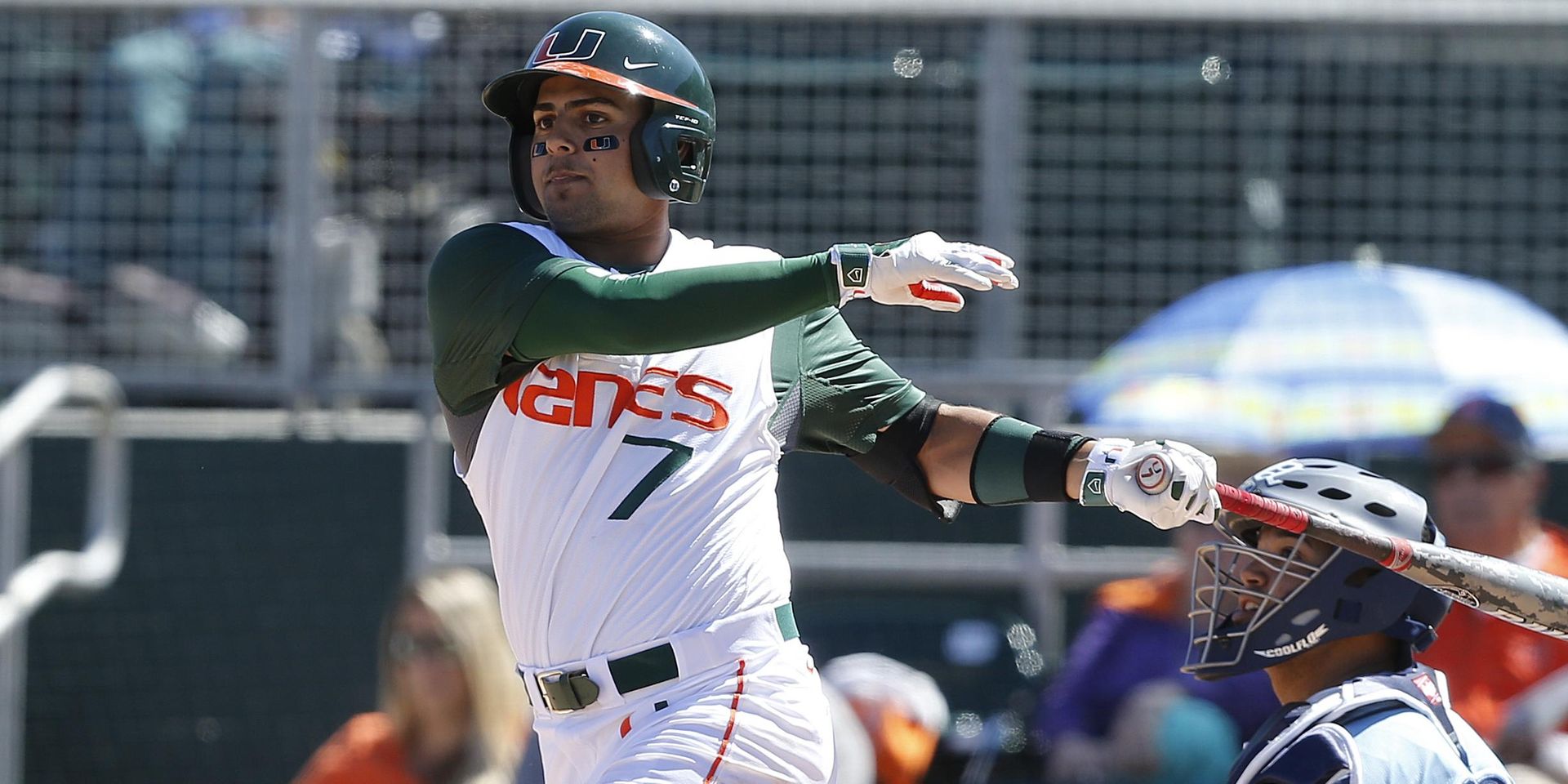 CORAL GABLES, Fla. – No. 11 Miami fell behind early, battled its way back, but ultimately fell in its weekend finale to visiting No. 16 Florida 6-4 Sunday afternoon.

After posting two thrilling wins in front of packed crowds at Alex Rodriguez Park at Mark Light Field, Miami looked to finish off a home sweep of the visiting Gators for the first time since 2008. Though the Hurricanes were unable to accomplish the feat, they successfully captured their first series victory over their in-state rival since 2009 in front over 11,000 fans across the weekend.

The Gators jumped all over Miami lefthander Andrew Suarez (1-1) in the early going, tagging the southpaw for four runs in the top of the first inning. Florida connected for six of its 11 hits in the game in the first, including an RBI triple from Peter Alonso and an RBI double from Braden Mattson.

“They were pretty aggressive in their first at bats and got some good hits,” said Suarez, who attributed his early struggles with the sink on his two-seam fastball

The hosts immediately responded, however, getting one back on a two-out RBI double from Brad Fieger. Senior captain Tyler Palmer, who entered Sunday’s finale hitting .375 in the first two games of the series, walked and stole second. After a line-out from sophomore David Thompson, Fieger connected on a two-out rip into the left-center gap off Gators starter Karsten Whitson to make it 4-1.

“Coming into it, we were really high intensity,” senior outfielder Dale Carey said. “When they put up the four-spot, we knew we had to put a comeback in, scrap some runs and that is what we did.”

A solo home run from Carey – Miami’s sixth homer off Gators pitchers this weekend – made it 4-2 in the bottom of the third. Carey cranked the home run into the netting behind the left field fence for his second of the season. The offensive explosion against Florida marked the first time Miami had connected on six home runs in one series since a trip to Virginia Tech in April 2010.

“He was working away, away, away, so I started looking away,” Carey said of his home run swing. “I got two strikes on me and I just stayed with my approach. He hung a slider, and I happened to put a good swing on it.”

Suarez would settle down after the first, allowing just two unearned runs the rest of the way.

“After that [first] inning I got into the dugout and [pitching coach] J.D. [Arteaga] asked me, ‘Are you having fun?’,” Suarez recalled. “He said, ‘Just relax and have fun.’ Then I relaxed.”

The Hurricanes strung together good at bats against Whitson, who was pulled in favor of reliever A.J. Puk after just three innings.

After the Gators regained a four-run advantage with two runs in the fourth to make it 6-2, Miami responded once again with two runs of its own in the bottom half of the fifth.

With Logan Shore on in relief and senior Alex Hernandez on second after a double, Carey walked to put two runners on base. Palmer ripped an RBI single through the leftside the plated a sliding Hernandez to make it 6-3, while another RBI single – this one from Thompson – cut the deficit to just two runs.

That was as close as Miami would get, however, failing to score over the final four innings. Miami threatened in the ninth when Garrett Kennedy walked and Alex Hernandez connected on a single. But Gators reliever Danny Young retired Sebastian Diaz and Eric Hanhold induced a flyout from Carey to end the game, with Hanhold picking up his career-first save in the process.

Miami will travel to Jupiter, Fla., for an exhibition matchup with the Miami Marlins Wed., Feb. 26 (1:05 p.m.) before making the trip to Tallahassee, Fla., for another marquee series with in-state rival Florida State. First pitch for Friday’s series opener is set for 4 p.m.