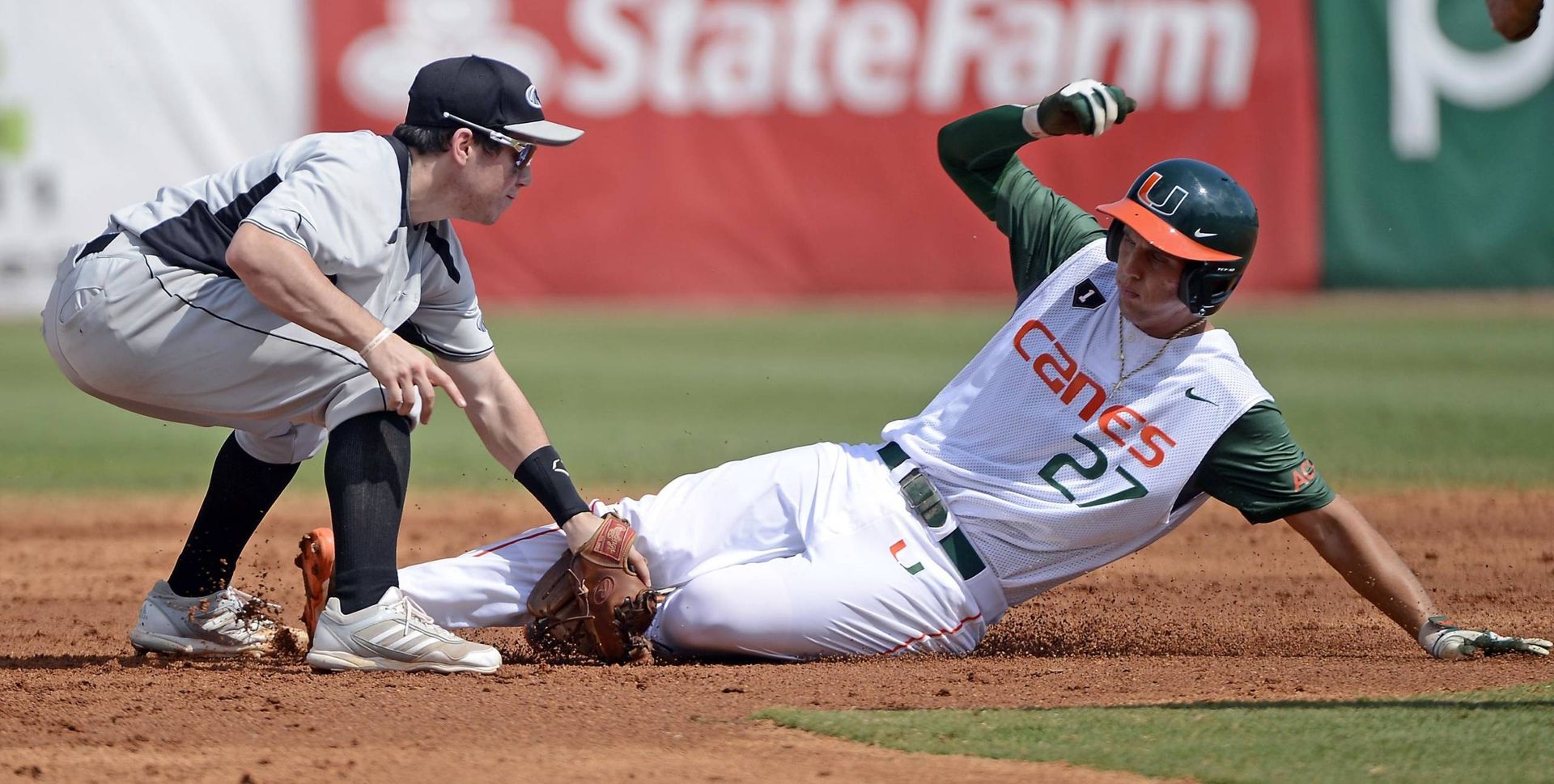 LOUISVILLE, Ky. — Second-seeded Miami dropped its winners’ bracket match-up with first-seeded Louisville Saturday at Jim Patterson Stadium, falling by a final score of 6-4 in Game Four of the Louisville Regional.

Facing a 1-0 deficit in the bottom of the seventh, the Cardinals (48-12) struck for six runs in the decisive frame to capture a 6-1 lead.The Hurricanes (37-24) would not go quietly, however, responding with a three-run rally of their own to cut into the deficit. Two runs was as close as they would get, however, as the Hurricanes set themselves up for a rematch with third-seeded Oklahoma State Sunday at noon.

“I’m proud of our guys. We played a full nine innings there,” assistant coach Gino DiMare said. “I know we got down 6-1 and pretty much everybody in the park thought it was over except our guys. I was proud of the way we came back and had a chance to tie it up there.”

The anticipated match-up between Miami’s All-American lefthander Bryan Radziewski and Louisville’s BIG EAST Pitcher of the Year Jeff Thompson was as impressive as expected, with both aces on top of their game in the early going. Radziewski registered seven strikeouts through the game’s first five innings, while Thompson set down 12 in a row after allowing a second-inning double to Miami sophomore catcher Garrett Kennedy.

Radziewski (9-3), who ended the regular season with the third-lowest ERA of any pitcher in the Atlantic Coast Conference, continued his highlight campaign with a strong performance Saturday. With the help of their junior ace, who threw 6.1 scoreless frames before Louisville’s offense struck, the Hurricanes set a new program record for consecutive scoreless innings in the postseason (24.2), besting the previous mark that was set from 1980-81 (21.2).

“I thought [Radziewski] threw great,” DiMare said. “We knew Louisville is a team that stands right on the plate. We were a little concerned about that, and I thought he did a good job.”

The Cardinals threatened to break the deadlock in the fifth when Cole Sturgeon doubled and Kyle Gibson was hit by a pitch to set up runners on the corners. Radziewski buckled down, however, recording back-to-back strikeouts of Zak Wasserman and Sutton Whiting to keep Louisville off the board.

The Hurricanes, who earned a place in the winners’ bracket with a win over Oklahoma State on Friday afternoon, opened the game’s scoring in the sixth. With junior Tyler Palmer on second and senior Chantz Mack on first, freshman slugger David Thompson drove a 1-2 pitch from the Cardinals’ righthander through the leftside to make it 1-0. With the hit, Thompson successfully reached base for the 27th consecutive game – the longest stretch of any Hurricane this season.

Miami chased the Cardinals’ ace in the seventh, when Thompson issued a walk to Kennedy to open the inning. After a successful sacrifice bunt from Christopher Barr advanced Kennedy to second, the Louisville bullpen retired Brandon Lopez and Dale Carey on groundouts to get out of the jam unharmed.

The Cardinals strung together two hit batters, an infield hit, a fielding error and two walks to jump out to a 3-1 lead, ending Radziewski’s day after 6.1 strong innings. Ratjczak then connected on a bases-clearing double to left off junior reliever Javi Salas, sending Louisvile to a 6-1 advantage.

Facing one of the top relievers in the nation in Nick Burdi, the Hurricanes rallied to score three runs in the eighth inning to cut into the Louisville lead. Thompson recorded an RBI groundout to make it 6-2, while a two-RBI single up the middle from junior Brad Fieger made it 6-4. Pinch-hitter Roger Gonzalez reached on a throwing error, advancing Fieger to third to build the dramatics. But Burdi got Lopez swinging with high heat to end the rally just short.

“In the end, they did a better job. They scored more runs than us,” DiMare said. “We have to be ready to play tomorrow.”

The Hurricanes will return to Jim Patterson Stadium Sunday with an elimination game against Oklahoma State at noon. If the Hurricanes are able to defeat the Cowboys for the second straight game, they will have a rematch with Louisville at 4 p.m. Both of tomorrow’s games will be televised live on ESPNU.