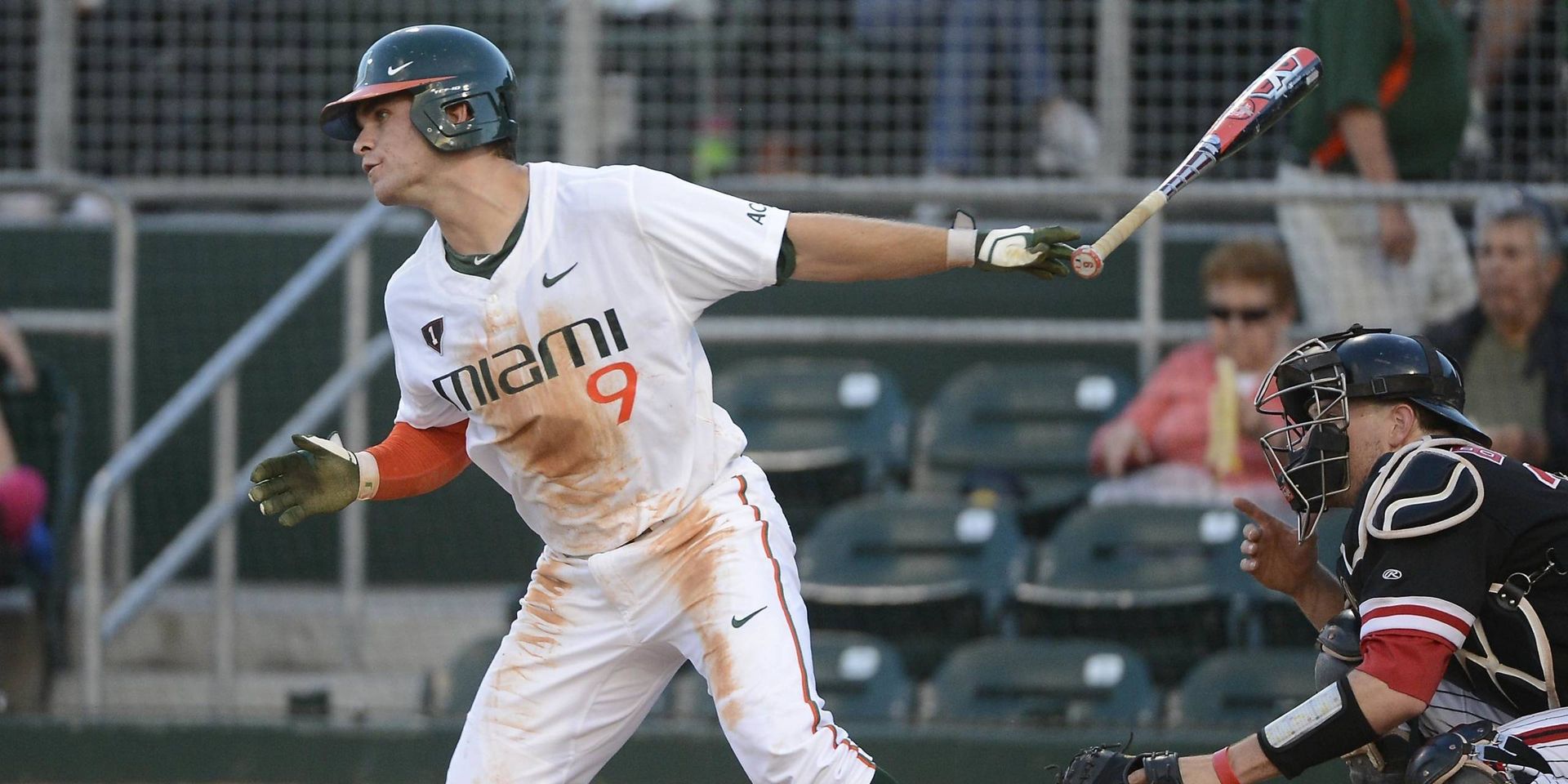 After scoring 19 combined runs in the first two games of the series, the hosts were unable to generate any offense off Jackets’ lefthander Jonathan King (6-4) on a sweltering South Florida afternoon. The freshman southpaw kept Miami off balance throughout the contest, while the Tech offense connected for four homeruns to salvage the final regular season series for both teams.

Though Miami (35-21, 14-16 ACC) jumped out to early leads in the first two games of the series, it was Georgia Tech (33-23, 15-15 ACC) who broke the deadlock Saturday with three runs off junior lefthander Bryan Radziewski in the top of the fifth.

After allowing a leadoff double to Thomas Smith, Radziewski (8-2) fielded a sacrifice bunt from Mitch Earnest and tried to catch Smith advancing to third. His throw was not in time, however, and after walking Kyle Wren to load the bases, Radziewski surrendered back-to-back RBI singles to give Georgia Tech a 3-0 advantage.

The southpaw did well to limit the damage, however, retiring three straight Tech batters to end the inning, including a swinging strikeout of slugger Daniel Palka. His day was ended prematurely just one inning later, when Yellow Jackets’ shortstop Mott Hyde connected on a towering homerun to left to make it 4-0 in favor of the visitors.

Georgia Tech blew the game open with four more runs in the inning, as Mitch Earnest registered a solo homerun and Palka recorded a two-run shot to deep right off reliever Vince Kossak to make it 8-0.

Facing a sizable deficit, Miami was unable to chip away in the middle innings despite building an opportunity in the seventh inning against Tech reliever Zane Evans. Senior Alex San Juan reached via error and advanced to third on a single from freshman Roger Gonzalez. A lineout from junior John Lawroski to center ended the chance, however, as the Hurricanes came up empty.

Miami threatened once again in the eighth, but once again fell just short. With runners on first and second and no outs, junior Alex Hernandez grounded into a double play freshman Grant Heyman struck out swinging to end the inning.

The Hurricanes managed to plate a run in the ninth, as Roger Gonzalez’ third RBI in the past two games made it 10-1. That was all Miami could muster, however, as Alex Cruz got a groundout from Lawroski to end the game.

The Hurricanes will next travel to Durham, N.C. for the 2013 Atlantic Coast Conference Championship beginning Wednesday, May 22. Miami will play three games over a span of four days at Durham Bulls Athletic Park, and, if the team manages to come out on top of its four-team pool, they will play a fourth game Sunday afternoon for the conference championship. All pool games will be televised on RSN/ESPN3, with Sunday’s finale set for live broadcast on ESPN2.