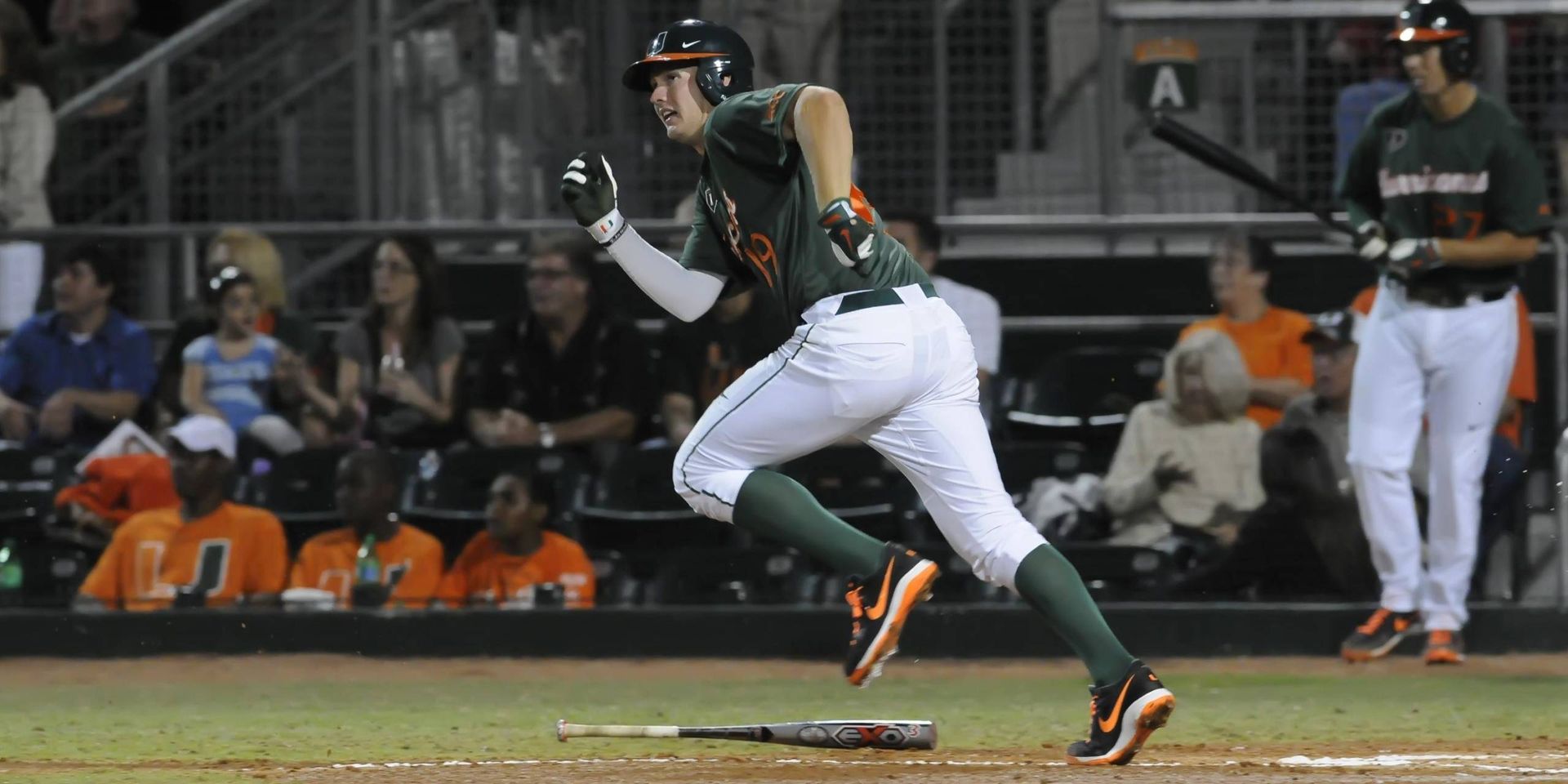 WINSTON-SALEM, N.C. — Powered by a career night from freshman slugger David Thompson and another strong outing from southpaw Chris Diaz, the Miami Hurricanes cruised to an 8-3 win over Wake Forest Friday night at Gene Hooks Field.

Thompson, who entered the game leading the Hurricanes (33-18, 12-13 ACC) in a number of key hitting categories, belted his fourth homerun of the season over the leftfield wall in the first. He would tack on an RBI double in the the third, matching his career high by driving in three of the team’s eight runs on the night. The Miami, Fla., native has reached base in 17 consecutive games, the longest such streak of any player this season.

Diaz twirled another gem against the Demon Deacons (26-24, 7-18 ACC), holding the hosts to just one run over his seven innings of work. The Florida City, Fla., native, coming off six shutout innings in a series-opening win over St. John’s, set the tone with another dominant outing, continuing an impressive personal stretch.

Over his last six starts dating back to an April 5 outing against Florida State, Diaz has allowed just two earned runs over 44.1 innings, good for a 0.40 ERA over that stretch. Diaz, who entered the match-up ranked fourth in the conference with a 1.42 ERA, manage to lower his mark with a strong performance on the hill.

The Hurricanes gave their starter a 3-0 before even stepping onto the rubber, as the team’s offense tagged Wake Forest starter Justin Van Grouw (4-7) in the early going. Junior Tyler Palmer led off the game with a single roped up the middle, while senior Chantz Mack dropped a bunt for a single to build the threat with runners on the corners.

After an RBI groundout from junior Brad Fieger made it 1-0 in favor of the Hurricanes, Thompson crushed a 1-0 pitch from Van Grouw over the wall in left to increase the team’s lead to three. The homerun was Thompson’s first since an April 13 shot against Maryland.

The Hurricanes increased their lead in the third, stringing together four hits in the frame off Van Grouw. After leading off the frame with a single, Palmer, who took second base cleanly on a steal, was driven in on an RBI single from Mack up the middle. Fieger advanced Mack to second with a single of his own, and an RBI double from Thompson belted into the left-center gap made it 5-0.

Miami blew the game open with two runs in the seventh, as an RBI double from junior Alex Hernandez and an RBI groundout from Mack made it 7-0. Mack and Palmer tied career-high marks with three hits apiece, as four Hurricanes delivered multi-hit games in the victory.

Diaz was able to keep the Demon Deacons off the board in the middle frames with some help from his defense, who turned five double plays on the night. Though Diaz surrendered seven hits and two walks, the southpaw worked his way out of jams throughout the contest. In Diaz’ final inning of work, the Demon Deacons loaded the bases and got an RBI single on a glove that glanced off the tip of Thompson’s glove at third.

With just one out in the inning, Diaz once again worked his way out of the jam. After a strike from Diaz, sophomore catcher Garrett Kennedy caught Brett Armour at first for a pick-off, and Diaz delivered a swinging strikeout of pinch-hitter Kevin Conway to hold the hosts to just one run.

Freshman shortstop Brandon Lopez, who played a key role in Miami’s dominant defensive play, was rewarded with his first career homerun in the top of the ninth. The Miramar, Fla., native drove a hanging pitch from reliever Nate Jones just over the leftfield fence to increase Miami’s lead to 8-1.

Though the Demon Deacons tagged Miami reliever AJ Salcines for two runs in the ninth, the lefthander induced a flyout from Mark Rhine to send Miami to its fourth straight victory.

The Hurricanes will return to Gene Hooks Field at Wake Forest Baseball Park Saturday for game two of their series with the Demon Deacons. First pitch for the match-up, set for live broadcast on the ACC Digital Network, is slated for 4 p.m.