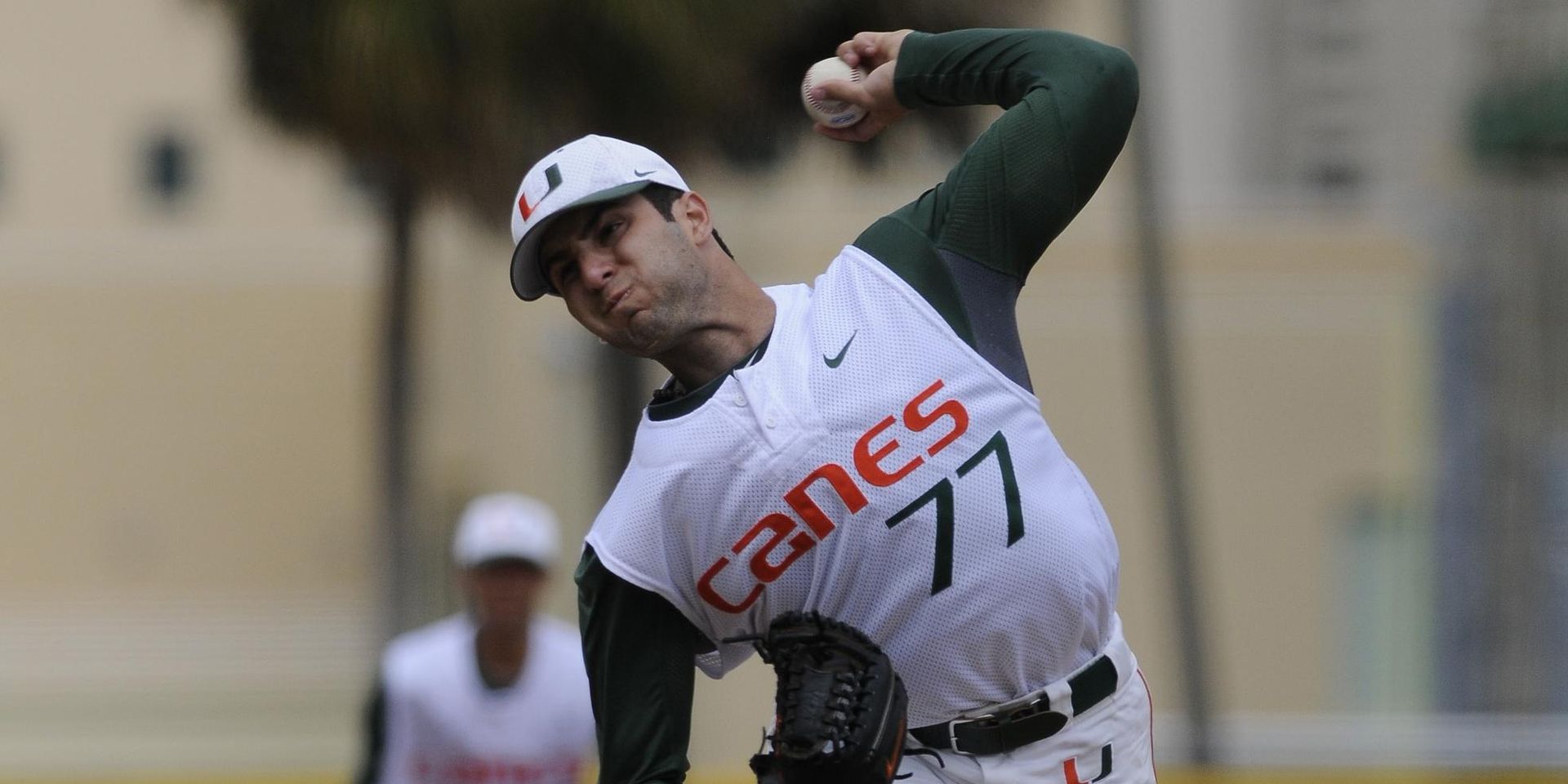 Radziewski, who entered the contest with a team-leading 0.95 ERA, was efficient once again for the Hurricanes, owners of a five-game home winning streak. The southpaw went eight innings, scattering six hits while allowing just one earned run.

“It’s great to see,” head coach Jim Morris said of his star southpaw. “Having the surgery, bouncing back. There were some tough days for him, so I’m very happy for him and thankful for our team. He has done a great job pitching.”

The Miami, Fla., native, who was named to the Golden Spikes Award midseason watch list earlier in the week, fanned eight Red Storm batters on the night, bringing his impressive season total to 81 in just 64.2 innings. He managed to maintain his ERA under one run for the season, as it moved to 0.97 after the outing.

“It’s a blessing to come back after surgery and have such a great year,” Radziewski said. “It’s what I hoped for. I always had my goals real high, and I’m trying to reach them.”

Senior Chantz Mack celebrated his birthday with a 3-for-3 day at the plate, including what proved to be the game-winning hit on an RBI triple in the fifth.

After scoring on a run on an RBI double from Brad Fieger later in the inning, Mack received a rare curtain call from the fans for his special performance. Mack obliged, saluting the crowd at the top step of the dugout.

“I was seeing the ball great today,” Mack said with a smile. “I don’t think I’ve felt this comfortable all year.  I guess it was a birthday present from the Lord.”

After an offensive barrage from the Hurricanes (31-18) in game one of the series, it was the visitors who struck first on a picturesque night for baseball at Alex Rodriguez Park at Mark Light Field.

St. John’s second baseman Bret Dennis opened the inning with a single through the leftside, advancing to second via sacrifice bunt. In a long battle between Radziewski and Pat Talbut, the Red Storm outfielder blooped an RBI double just inside the foul line in shallow right to make it 1-0.

Radziewski would do well to limit the damage, however, fanning back-to-back batters to hold the Red Storm to just one run.

The Hurricanes took their first lead of the night in the bottom of the fourth on another clutch hit from freshman slugger David Thompson. But the hosts might not have had the opportunity to gain the lead if not for a Red Storm defensive miscue that set up the scoring opportunity.

With Mack on first after singling to lead off the inning, junior Brad Fieger connected on a hard-hit grounder to second baseman Bret Dennis that looked like a potential double play ball. But Dennis was unable to handle it cleanly for a flip to the shortstop, and the ensuing throw to first base was off line, leaving both runners safe.

After a sacrifice bunt from senior Alex San Juan advanced both Mack and Fieger into scoring position, Thompson drove an 0-2 pitch from St. John’s starter Sean Hagan through the rightside to plate both runners for the 2-1 lead.

Though the Red Storm knotted the game up via Talbut’s suicide squeeze in the fifth, the Hurricanes would regain a two-run advantage on back-to-back extra-base hits from Mack and Fieger in the bottom half of the frame.

With junior Alex Hernandez on first after a two-out single, Mack ripped the first pitch he saw from Hagan past the diving first baseman and into the rightfield corner for an RBI triple. He would score on a double from Fieger over the head of leftfielder Zach Lauricella, who looked to have misjudged the ball from his perch in the outfield.

“I see guys getting hits all throughout the lineup,” Mack said. “Those big two-out hits, men in scoring position, we’re starting to get those hits now. It’s big.”

St. John’s was unable to plate any runs off Radziewski in his final three innings of work, as he ended his night after 118 pitches.

Senior closer Eric Nedeljkovic recorded his 11th save of the season in the ninth, shutting down the Red Storm to help clinch the series.

“Right now, I feel like our backs are to the wall,” Coach Morris said. “We have to battle and win every game one at a time. Just make sure when we leave the field, we gave it a great effort and we played hard.”

The Hurricanes will return to Alex Rodriguez Park Sunday for the series finale with the Red Storm. First pitch is set for noon.