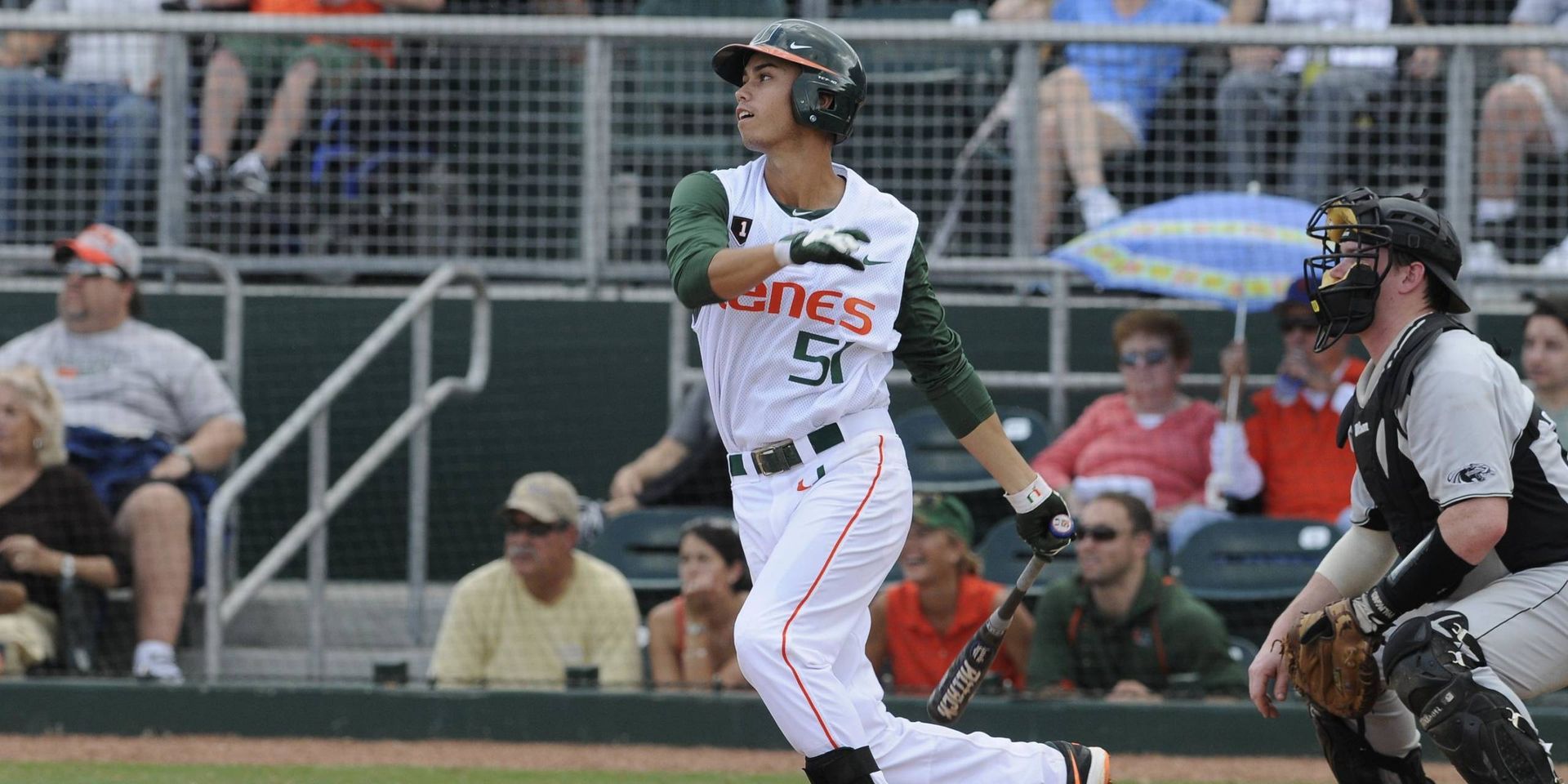 CORAL GABLES, Fla. – The Miami Hurricanes wrapped up their five-game homestand in impressive fashion Wednesday night, coming from behind to capture their contest with visiting Florida Atlantic by a final score of 6-4.

In a back-and-forth affair at Alex Rodriguez Park at Mark Light Field, Miami jumped out to an early lead, fell behind, and then rallied in the later innings to claim the rubber match of the season series with the Owls. Freshman shortstop Brandon Lopez, who matched a career high with three hits and set a new career mark with three RBI’s, delivered a clutch two-out, two-RBI single in the bottom of the seventh that proved to be the difference.

“Florida Atlantic has got a good club,” head coach Jim Morris said. “I thought we did a good job battling back after we gave up the lead early.”

The Hurricanes (28-16) connected for two runs in the bottom of the first inning off FAU starter Kyle Miller to claim a 2-0 advantage.

With Alex Hernandez and Tyler Palmer in scoring position after back-to-back hits to open the frame, senior Chantz Mack knocked in the game’s opening run on an RBI groundout. A four-pitch walk to freshman David Thompson then gave Miami runners on the corners, and senior Alex San Juan delivered an infield single plating Hernandez from third to increase the lead to 2-0.

The leadoff single from Palmer extended his hitting streak to five consecutive games.

The Owls would respond with three runs of their own off Miami starter Javi Salas (5-4) in the second inning on RBI singles from Mitch Morales and Nathan Pittman sandwiched around a sacrifice fly from Sean Murrell.

“I wasn’t locating pitches,” Salas said of his early struggles. “I felt like if I could get that down, I could have a successful night. I told myself, ‘that’s all they’re going to get.'”

But the Hurricanes would strike right back to tie the game in the bottom of the same inning, as an RBI single from freshman Brandon Lopez knotted the game up once again. With junior outfielder Dale Carey on third after a double and advance via wild pitch, Lopez dropped a single in front of FAU rightfielder Corey Keller to tie the game 3-3.

After allowing a single run in the third to make it 4-3 in favor of the visitors, Salas would settle down to retire the next 18 batters he faced before being pulled in favor of senior closer Eric Nedeljkovic in the ninth. After allowing six hits in the first three innings, Salas would allow none the rest of the way, striking out four FAU batters on the night.

“I’m glad I was able to do it today and be able to give my team a chance to win,” Salas said. “I gave up the lead early, and those guys battled back. It was a big win for us.”

With the game tied up at 4-4 after an RBI single from Mack in the sixth, the Hurricanes struck for two runs off Michael Sylvestri (3-1) on Lopez’ basehit through the leftside to gain a 6-4 advantage in the bottom of the seventh.

Nedeljkovic shut the door on his tenth save of the season, helping extend a string of 21 straight batters retired by Miami pitchers to close out the night.

The Hurricanes next travel to Chestnut Hill, Mass., for an Atlantic Coast Conference series with Boston College.

“We have more energy in the dugout, which helps us hitting and helps our pitchers as well,” Lopez said. “We just have to keep that energy going into Boston. We have to keep it up.”

First pitch for Friday’s series opener is set for 2:30 p.m.